Energy drink brand Big Shock! launches special can in Czech Republic, Slovakia to mark launch of Call of Duty: Modern Warfare II; produced using Ardagh’s H!GHEND technology, the can has military-style green and black styling all over, including the end 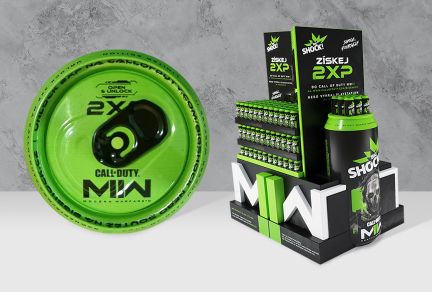 Big Shock!, the #2 energy drink in the Czech Republic, aims to attract young (18-35) gaming fans who are pumped for the new Call of Duty release and want to stay sharp while playing. In an exclusive beverage tie-in within the Czech Republic and Slovakia, Big Shock! has released a limited edition 500ml can which blasts the iconic game’s potent military-style green and black styling all over the pack, including the end.

And it’s not just the intense aesthetic that will appeal to gamers. Consumers are invited to unlock enhanced game features by following a “covert” link printed crisply into the edge of the shell – a feature made possible for the first time by the power of AMP’s new H!GHEND technology. The striking green end features a black promotional tab which, on opening, reveals a unique code for 2XP and potential prizes such as a PlayStation 5.

Call of Duty: Modern Warfare II, the latest chapter in the world-famous first-person shooter series, launches globally in October 2022. According to pre-launch buzz, the new episode boasts several major leaps forward in the gameplay. Since AMP’s H!GHEND series represents a big step up for branding at the can end, it is a fitting choice for Big Shock!’s Modern Warfare II promotional pack.

‘We were determined to find the newest available technology out there for this promotion,’ says Jan Kopriva, Big Shock! Marketing Manager. ‘That’s our strategy: to always be innovative. H!GHEND gives us exactly what we need, with new ways to draw in consumers and offer them something they haven’t seen before.’

Dirk Schwung, Sales Director at Ardagh Metal Packaging – Europe, says: ‘One of the most versatile and exciting features of H!GHEND is its potential for use in promotional series and special packs. It’s great to see Big Shock! embrace our newest innovations yet again for this exclusive Call of Duty can.’

Filled by Starzinger in Austria, the Big Shock! Call of Duty can is available now on the Czech and Slovak markets.