The Government of Panama and other tropical countries supported resolutions passed during the recent UN Climate Change Conference (COP26), which highlighted the critical importance of curtailing deforestation and restoring tropical ecosystems. But how much carbon dioxide is released into the atmosphere when tropical forests are destroyed? How much carbon is stored as they recover? This is essential to understanding what these resolutions will mean in terms of specific deforestation and reforestation actions in the tropics.

Understanding just how much deforestation affects carbon storage is not easy: deforestation rates are affected by factors ranging from local economic development to global political and economic forces. Scenario planning allows policy makers and researchers to grapple with uncertainty by visualizing deforestation pathways.

Based on measurements of forest carbon storage in Panama, a new study led by the Smithsonian Tropical Research Institute (STRI) reduces the uncertainty of mathematical models predicting carbon dioxide release resulting from deforestation scenarios and highlights the amazing capacity of young, regenerating or secondary forests to pull this greenhouse gas from the atmosphere.

The authors offer three deforestation scenarios based on 1) recent deforestation trends, 2) rates calculated in the decades prior to 2000, and 3) more hopeful scenarios in which deforestation is halted entirely or even where forests regenerate on all available land.

To improve the accuracy of their predictions, they calculated deforestation rates and correlated the amount of forest lost with geographical features based on a set of maps of existing forest cover in Panama created by study co-author, Kendra Walker.

“Panama has been making strides to calculate both the carbon sequestration potential in its forests and emissions due to forest loss,” said Jefferson Hall, lead author and STRI staff scientist. “Scenarios can help decision makers better anticipate the potential consequences of alternative sets of land-use decisions, which have a significant impact on Panama’s climate mitigation strategy.”

The research group, which also included scientists from the Harvard Forest, Arizona State University, and the University of California Santa Barbara in the United States, the University of Canterbury in New Zealand, and Yale NUS in Singapore, leveraged a Panama-wide carbon density map produced using the airborne laser technology or LiDAR by coupling a decade-long study of secondary forests with more than 1.1 million tree measurements with local studies of often-neglected carbon pools in tree roots, soil, lianas, and coarse woody debris.

Their analysis of central Panama, about one-quarter of the country, includes the area crucial for the functioning of the Panama Canal, and visually depicts the landscape in 2030 and 2050 under potential deforestation scenarios. Their discussion includes an assessment of how these deforestation pathways would impact Panama’s carbon sequestration objectives.

An important feature of the study is that it allows an evaluation of individual deforestation events. For example, if Panama permits the clearing of up to 25,000 ha of mature forest for mining in the Donoso and La Pintada districts of Colon and Coclé as has been reported in the press, emissions could amount to over 11 million metric tons of carbon dioxide, or the equivalent of over 40% of the potential carbon gains under the Recent Trends scenario by 2030.

Initiatives to ensure that Panama meets its carbon sequestration goals going forward will require a combination of active reforestation and allowing passive natural processes of forest succession to take place. Letting these young secondary forests regenerate will draw on the local species that are adapted to local conditions.

These forests are also important for water security thanks to the “sponge effect”, by which forest soils absorb water during the wet season and release it as stream flow during the dry months.

This study was supported in part by Lloyds Tercentenary Research Foundation.

Disclaimer: AAAS and EurekAlert! are not responsible for the accuracy of news releases posted to EurekAlert! by contributing institutions or for the use of any information through the EurekAlert system. 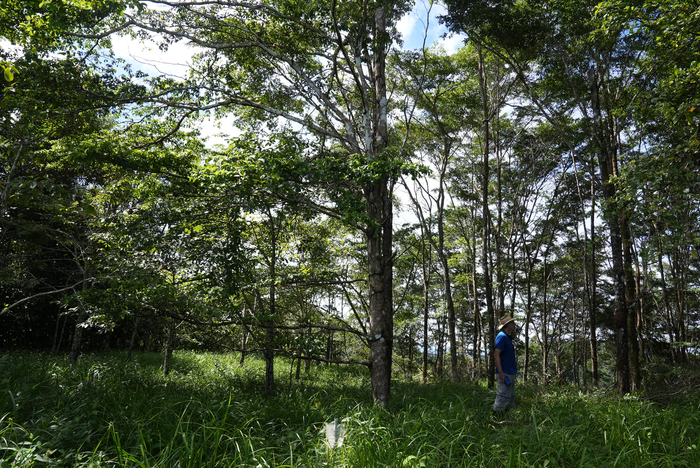 IMAGE: ENSURING THAT PANAMA MEETS ITS CARBON SEQUESTRATION GOALS IN THE FUTURE WILL REQUIRE A COMBINATION OF ACTIVE REFORESTATION AND ALLOWING PASSIVE NATURAL PROCESSES OF FOREST SUCCESSION TO TAKE PLACE. view more