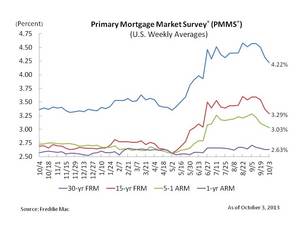 
Average commitment rates should be reported along with average fees and points to reflect the total upfront cost of obtaining the mortgage. Visit the following links for the Regional and National Mortgage Rate Details and Definitions. Borrowers may still pay closing costs which are not included in the survey.

"With the onset of the federal government shutdown and declining consumer confidence, fixed mortgage rates fell for the third consecutive week. Consumer sentiment fell for the second month in a row in September to its lowest reading since April, according to the University of Michigan. Moreover, a recent Bloomberg survey of professional forecasters suggests that a partial federal shutdown lasting one week would shave 0.1 percentage points off of GDP growth in the fourth quarter and even more if the shutdown lasts longer."

Freddie Mac was established by Congress in 1970 to provide liquidity, stability and affordability to the nation's residential mortgage markets. Freddie Mac supports communities across the nation by providing mortgage capital to lenders. Today Freddie Mac is making home possible for one in four home borrowers and is one of the largest sources of financing for multifamily housing. For more information please visit www.FreddieMac.com and Twitter: @FreddieMac.


* All content is copyrighted by Industry Intelligence, or the original respective author or source. You may not recirculate, redistrubte or publish the analysis and presentation included in the service without Industry Intelligence's prior written consent. Please review our terms of use.