World exports of intermediate goods (IGs) continued to rise in the third quarter of 2021, although at a slower pace than the previous quarter according to a WTO report released on 4 February. A rise in traded inputs for medical goods and metal products and increases across all regions helped drive the export growth. 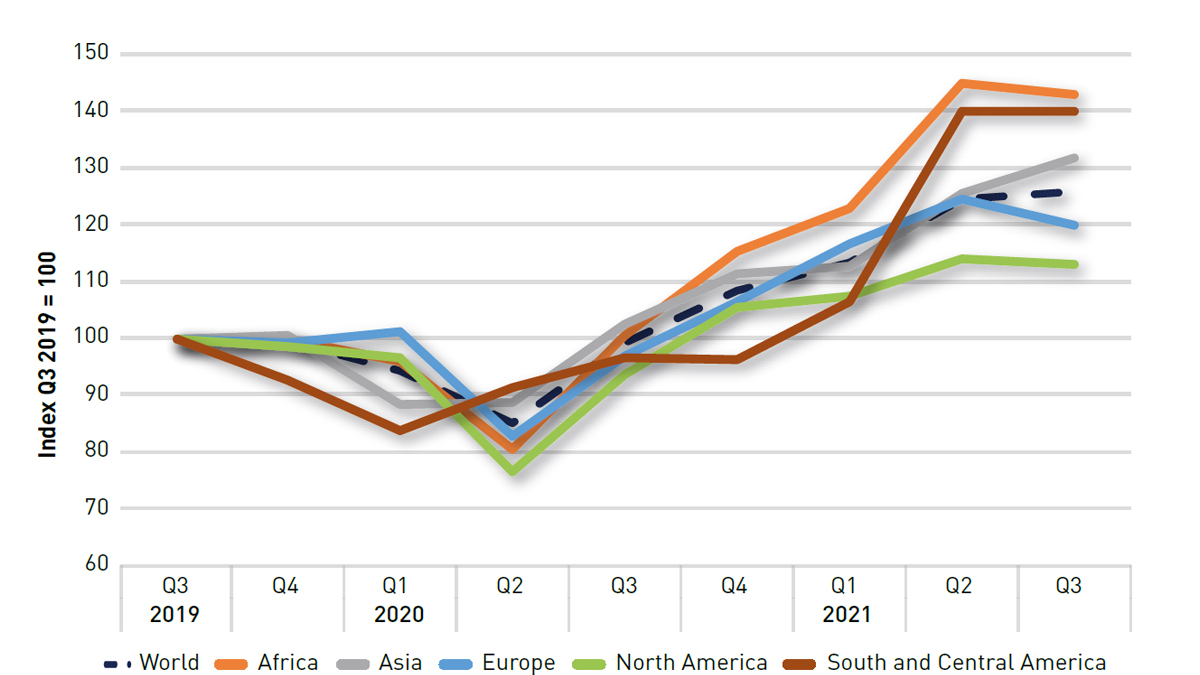 World IG exports grew by 27 per cent year-on-year in the third quarter of 2021, compared to the 47 per cent rise recorded in the second quarter. Trade in IGs, which are inputs used to produce a final product, is an indicator of the robustness of global supply chains.

The product category "Other industrial supplies," which made up almost half of total IG exports in the third quarter, grew the fastest among all IG categories, rising 38 per cent year-on-year and amounting to US$ 1.225 billion. It comprises IGs such as vaccine products, medical parts and accessories, diagnostic or laboratory reagents, and other medical intermediate goods. The category also includes raw or semi-manufactured metals such as copper cathodes, articles of iron or steel and aluminium. The high growth rate of the category follows a 52 per cent rise recorded in the second quarter.

World exports of transport equipment parts and accessories, however, grew more slowly at 8 per cent year-on-year in the third quarter compared with 69 per cent in the second quarter. The rise in IG exports of ores and minerals also slowed to 16 per cent compared with an average growth of 47 per cent during the first half of the year. This was partly due to falling iron ore prices in September 2021.

Belgium, which counts vaccine products as its most traded IG, posted the largest growth, recording a 46 per cent rise in IG exports in the third quarter following a 64 per cent increase in the second quarter. China's IG exports grew by 36 per cent and the country continues to garner the largest shares of world IG exports.  For the third consecutive quarter, India had the highest growth of IG imports (65 per cent), due mainly to the upward momentum of non-monetary gold imports (161 per cent growth).

All regions posted increases and surpassed IG export levels of 2019 before the COVID-19 pandemic struck. Africa and South and Central America continued to see the strongest growth in IG exports. In the third quarter, Africa saw its IG exports increase by 42 per cent, as several economies in the region intensified their supply of metals and primary products to international production chains. South Africa, for example, posted 226 per cent and 195 per cent increases respectively in its rhodium and iron ore exports while Ghana saw exports of cocoa beans reach US$ 1.6 billion. IG exports of South and Central America rose 45 per cent, driven by increases in exports of iron and copper ores (73 per cent) and soybeans (41 per cent). Intra-regional IG trade within South and Central America increased the most among all regions (56 per cent).

The third quarter information note on trade in intermediate goods is available here. It now includes appendix tables with data starting from the first quarter of 2019.