Wholesale sales in Canada rose 0.1% to C$80.7B in June, led by growth in two of seven subsectors, miscellaneous and motor vehicle and motor vehicle parts and accessories; inventories increased 3.4% to C$120.0B: Statistics Canada 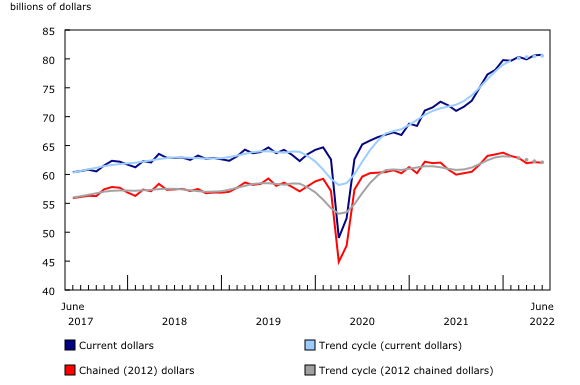 Sales of agricultural supplies and motor vehicles drive increase in June
Sales of miscellaneous goods increased for the fourth time in five months. A 3.5% increase in sales marked the first time this subsector surpassed $12 billion. Growth of 15.5% in the agricultural supplies industry and 3.3% in the chemical and allied product (except agricultural) industry generated the bulk of the gain as three of the five industries recorded higher sales in June. The growth reflects the demand for Canadian fertilizer because of the ongoing conflict in Ukraine. Canadian exports of fertilizers, pesticides, and other chemical products have risen 30.6% since January, with 3.2% of that increase coming in June.

The personal and household goods subsector posted the largest drop in June with sales falling 3.5% to $11.1 billion. Sales in four of the five component industries fell, with substantial decreases in the textile, clothing and footwear (-12.0% to $1.5 billion) and the pharmaceuticals and pharmacy supplies (-2.5% to $5.6 billion) industries. Excluding the personal household goods subsector, wholesale sales would have risen 0.7% in June.

Saskatchewan reported the highest provincial increase in sales in June, up 14.9% to $4.2 billion. Sales rose in five of the seven subsectors. The driving factor for sales in this province was the agricultural supply industry of the miscellaneous subsector, which increased 30.3% on the strength of record exports of fertilizer products. While other subsectors in the province encountered some movement, their changes were negligible compared with the shift in the miscellaneous subsector.

Sales in Manitoba rose 20.7% to $2.1 billion, with all subsectors reporting higher sales. Like Saskatchewan, the growth was primarily driven by higher sales of agricultural supplies in the miscellaneous subsector. Additional contributions to the province growth included a 10.2% increase from the machinery, equipment and supplies subsector, and a 7.0% increase in sales from the food, beverage and tobacco merchant wholesalers.

Quebec led the declines among the seven remaining provinces with a decrease of 2.8% to $14.4 billion. Six of seven subsectors reported lower sales, led by a 5.5% decline in the personal and household goods subsector and a 4.6% decline in the food, beverage and tobacco subsector. The machinery, equipment and supplies subsector reported the only increase in June, up 1.0%, which did little to offset the provincial decline.

Five provinces and all territories had higher sales in the second quarter of 2022 when compared with the previous quarter. Leading the gains were Alberta, up 4.3%, and Saskatchewan, up 10.0%. Together with Ontario, these provinces were responsible for 91% of the quarterly increase in sales.

The building material and supplies subsector reported the highest growth in inventories in June, up 6.1% to $23.5 billion. This marks the third consecutive month of growth for the subsector. While all three component industries had higher inventories, gains in the lumber, millwork, hardware and other building supplies industry far surpassed those of the electrical, plumbing, heating and air-conditioning equipment and supplies industry and the metal service centres industry. The growing stocks of lumber, millwork, hardware and other building supplies coincide with the decline in demand domestically and abroad, as exports of lumber and other sawmill products fell 13.1% in June.

Growth in the miscellaneous subsector also contributed to the overall increase in June, up 6.9% to $18.3 billion. The growth was primarily driven by the agricultural supplies industry. While lower inventories were reported in the recyclable material industry and paper, paper product and disposable plastic product industry, these changes did little to offset the growth in the subsector.

Wholesale inventories increased by 9.1% in the second quarter of 2022. This increase was led by growth in stocks of machinery, equipment and supplies merchant wholesalers (+8.8%), miscellaneous merchant wholesalers (+16.7%) and building material and supplies (+11.4%). This is the first quarter to have growth in all subsectors since the second quarter of 2019.

The inventory-to-sales ratio increased from 1.44 in May to 1.49 in June. This ratio is a measure of the time (in months) required to exhaust inventories if sales were to remain at their levels.

Seasonally adjusted data are data that have been modified to eliminate the effect of seasonal and calendar influences to allow for more meaningful comparisons of economic conditions from period to period. For more information on seasonal adjustment, see Section 2: Issues related to analysis and interpretation.

Trend-cycle estimates are included in selected charts as a complement to the seasonally adjusted series. These data represent a smoothed version of the Seasonally adjusted time series (see Section 1: Concepts and definitions) and provide information on longer-term movements, including changes in direction underlying the series. For information on trend-cycle data, see Trend-cycle estimates – Frequently asked questions.

Next release
Wholesale trade data for July 2022 will be released on September 16, 2022.