Study of 2,098 respondents finds 49% of US workers are considering leaving current place of work; those considering a switch are less likely to feel sense of belonging at work, which is associated by 76% with being treated fairly and respectfully: IPSOS 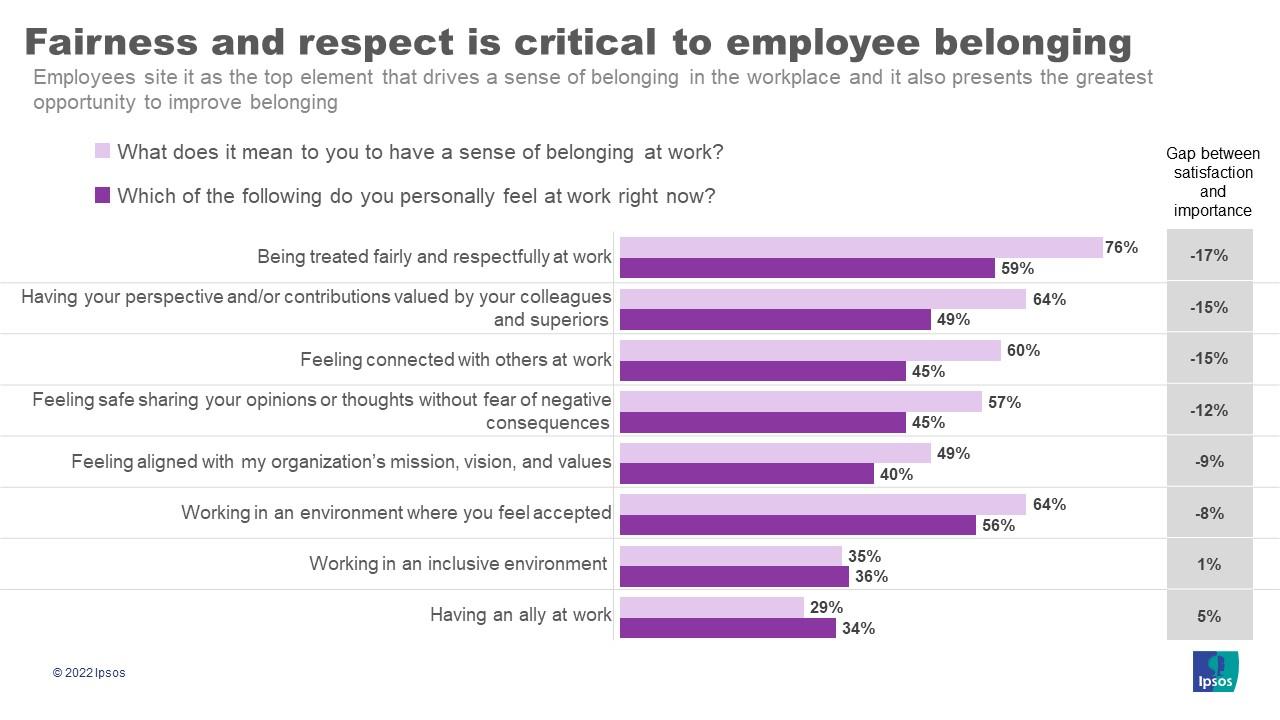 The 2022 Workplace Belonging Survey finds that nearly half of employed Americans are considering leaving their current place of employment. Those that are considering a switch are less likely to feel a sense of belonging at work, which is most often associated with being treated fairly and respectfully – though belonging encompasses many more emotions.

This Ipsos survey conducted on behalf of Dr. Rumeet Billan also explores gaps in what workers think would lead to a sense of belonging at work and what they are currently experiencing at their jobs.

Most employed Americans feel having a sense of belonging at work means being treated fairly and respectfully, and that belonging leads to higher productivity at work.

A large majority of employed Americans strongly or somewhat agree that they feel a sense of belonging at work. However, this varies by age and whether they are open to new opportunities or not.

Almost half of employed Americans are actively looking for a new job or are open to a new opportunity, with differences arising by age.

The 2022 Workplace Belonging Survey was conducted January 7 – January 11, 2022 by Ipsos using our KnowledgePanel®. It was conducted on behalf of Dr. Rumeet Billan, a learning architect, speaker, and expert on psychological capital. This survey is based on a nationally representative probability sample of 1,054 U.S. employed adults and oversamples in each of the following Designated Market Area (DMA): New York City (n=333), Chicago (n=283), Los Angeles (n=295), and Washington D.C (n=286). There were 2,098 total respondents.

The survey was conducted using KnowledgePanel, the largest and most well-established online probability-based panel that is representative of the adult US population. Our recruitment process employs an addressed-based sampling methodology using the latest Delivery Sequence File of the USPS – a database with full coverage of all delivery points in the US. Households invited to join the panel are randomly selected from all available households in the U.S. Persons in the sampled households are invited to join and participate in the panel. Those selected who do not already have internet access are provided a tablet and internet connection at no cost to the panel member. Those who join the panel and who are selected to participate in a survey are sent a unique password-protected log-in used to complete surveys online. As a result of our recruitment and sampling methodologies, samples from KnowledgePanel cover all households regardless of their phone or internet status and findings can be reported with a margin of sampling error and projected to the general population.

The employed general public data were weighted to the demographic benchmarks of National employed adults age 18+ from the KnowledgePanel Profile survey by the following variables:

The employed DMA data were weighted separately to the demographic benchmarks of employed adults age 18+ in their respective DMAs from the KnowledgePanel Profile survey by the following variables:

The margin of sampling error is plus or minus 3.1 percentage points at the 95% confidence level, for results based on the entire sample of employed adults. The margin of sampling error for the entire sample of employed adults takes into account the design effect, which was 2.08. The margin of sampling error at the 95% confidence level for the DMA oversamples were as follows: Chicago (7.8%), Washington DC (7.9%), NYC (6.6%), and LA (9.4%). In our reporting of the findings, percentage points are rounded off to the nearest whole number. As a result, percentages in a given table column may total slightly higher or lower than 100%. In questions that permit multiple responses, columns may total substantially more than 100%, depending on the number of different responses offered by each respondent.

Ipsos is the world’s third largest Insights and Analytics company, present in 90 markets and employing more than 18,000 people.

Our passionately curious research professionals, analysts and scientists have built unique multi-specialist capabilities that provide true understanding and powerful insights into the actions, opinions and motivations of citizens, consumers, patients, customers or employees. We serve more than 5000 clients across the world with 75 business solutions.

Founded in France in 1975, Ipsos is listed on the Euronext Paris since July 1st, 1999. The company is part of the SBF 120 and the Mid-60 index and is eligible for the Deferred Settlement Service (SRD).