Labor Shortages, Escalating Costs and Wages, and the Omicron Surge Take a Toll

The Conference Board Measure of CEO Confidence™ in collaboration with The Business Council declined for the third consecutive quarter in Q1 2022. The measure now stands at 57, down from 65 in Q4 2021. While still in positive territory, the Measure is now down 25 points from the all-time high of 82 recorded in Q2 2021. (A reading above 50 points reflects more positive than negative responses.)

“CEO confidence fell further to start 2022 as business leaders struggle to contend with inflation, labor shortages, and yet another viral surge,” said Dana Peterson, Chief Economist of The Conference Board. “In the midst of Omicron’s sudden impact, only one-third of CEOs now report current economic conditions are better than six months ago—down dramatically from over 60 percent in Q4 2021. Expectations for future conditions also softened, though 50 percent of CEOs still expect the economy to improve over the next six months—roughly double the proportion expecting conditions to worsen.”

In addition to current and future economic conditions, the Q1 survey also asked CEOs to share their views on the most pressing COVID impacts and the business and policy response to surging inflation. Notably, nearly 3 out of 4 do not expect projected interest-rate increases from the Federal Reserve to quickly tame rising prices in the months ahead.

“CEOs are preparing for supply constraints and wage inflation to persist well into this year and potentially beyond,” said Roger W. Ferguson, Jr., Vice Chairman of The Business Council and Trustee of The Conference Board. “While interest-rate hikes should help dampen inflation, few are expecting prices to stabilize rapidly. As a result, a vast majority of CEOs still foresee a need to pass along rising costs to consumers over the next 12 months.” 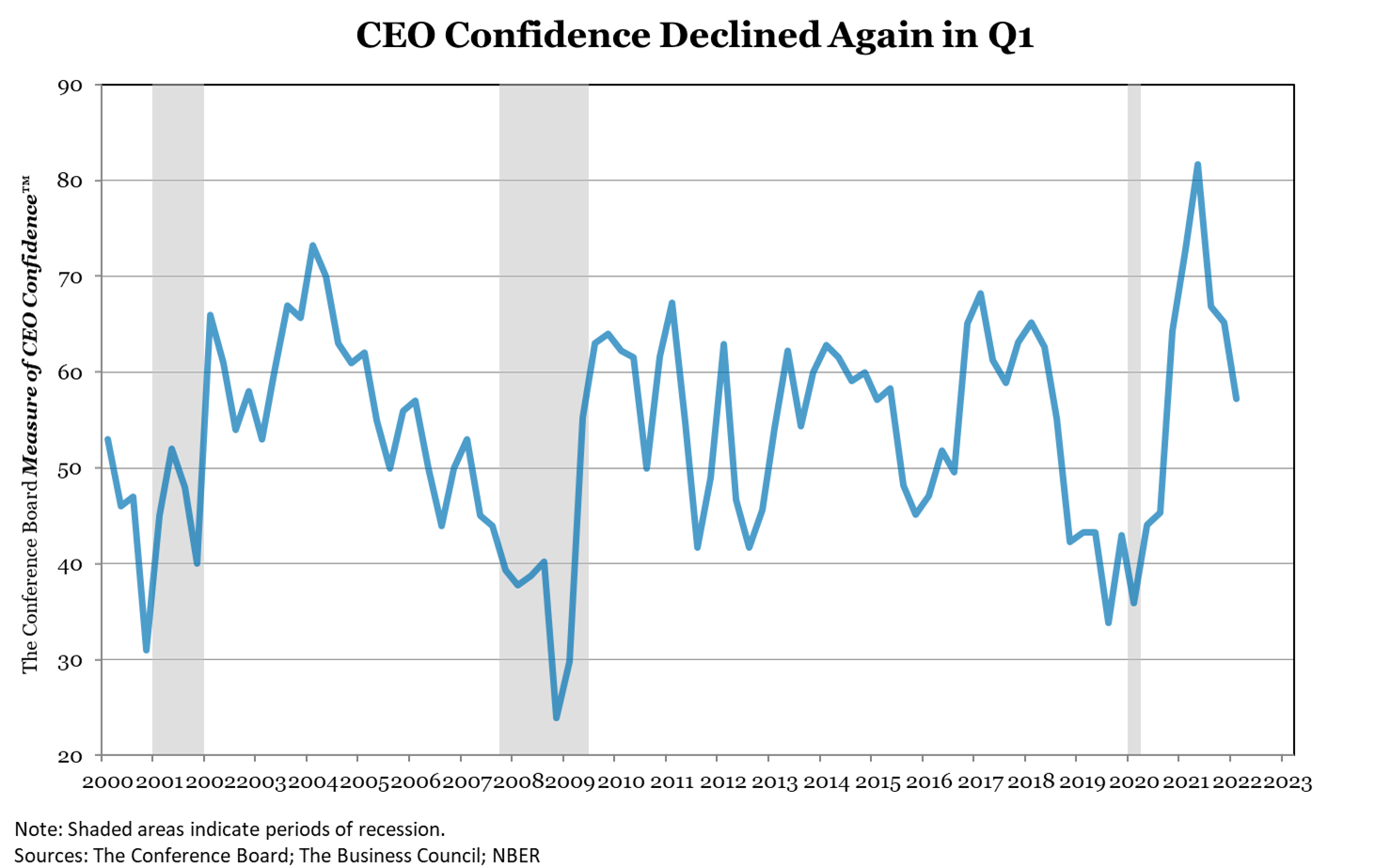 34% of CEOs reported economic conditions were better compared to six months ago, down from 61% in Q4 2021.
35% said conditions were worse, up from 19%.
CEOs were less optimistic about conditions in their own industries in Q1 2022:

Expectations about the short-term economic outlook weakened in Q1 2022:

50% of CEOs said they expected economic conditions to improve over the next six months, down from 61% in Q4.
23% expected conditions to worsen, up from 13%.
CEOs’ expectations regarding short-term prospects in their own industries moderated in Q1:

Nearly 75% of CEOs said interest rate hikes were unlikely to curb inflation as quickly as the Fed would like because supply constraints and wage inflation would still persist. Only 21% expect rate hikes will reduce inflation.
Nearly 30% said they would pass along rising transportation and labor costs within 6 months. An additional 45% expect to pass along these costs within 6–12 months.
For CEOs, the strain of COVID-19 is continuing—but evolving—as the pandemic enters its third year:

95% of CEOs foresee no need for additional COVID relief.
Instead, CEOs named employee fatigue, disruption of return-to-work plans, and rising costs as the top 3 ongoing impacts resulting from the Delta and Omicron surges.

The survey also gauged CEOs’ expectations about four key actions their companies plan on taking over the next 12 months.