Confidence Dropped to Levels Not Seen Since the Start of COVID

The Conference Board Measure of CEO Confidence™ in collaboration with The Business Council declined for the fourth consecutive quarter in Q2 2022. The measure now stands at 42, down from 57 in Q1. The Measure has fallen into negative territory and is at levels not seen since the onset of the pandemic. (A reading below 50 points reflects more negative than positive responses.)

The Q2 survey also asked CEOs to share their views on the Federal Reserve’s tightening policy. Notably, nearly 60 percent of CEOs expect inflation will come down over the next few years. But they also believe that the interest rate hikes that will tame inflation will cause a recession—albeit, a very brief, mild recession that the Fed offsets.

“CEO confidence weakened further in the second quarter, as executives contended with rising prices and supply chain challenges, which the war in Ukraine and renewed COVID restrictions in China exacerbated,” said Dana M. Peterson, Chief Economist of The Conference Board. “Expectations for future conditions were also bleak, with 60 percent of executives anticipating the economy will worsen over the next six months—a marked rise from the 23 percent who held that view last quarter.”

“Amid historically low unemployment and record job openings, nearly 70 percent of CEOs are combating a tight labor market by increasing wages across the board,” said Roger W. Ferguson, Jr., Vice Chairman of The Business Council and Trustee of The Conference Board. “On top of that, companies are grappling with higher input costs, which 54 percent of CEOs said they are passing along to their customers. This may contribute to cooling in consumer spending heading into the summer.” 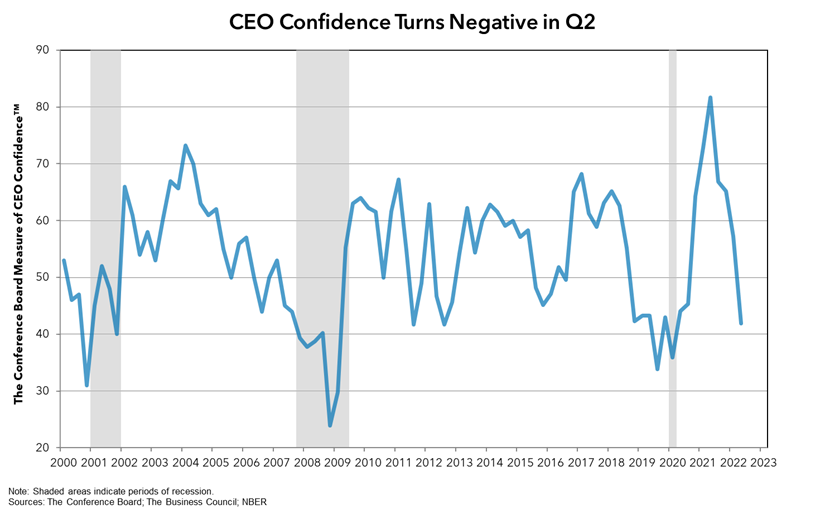 14% of CEOs reported economic conditions were better compared to six months ago, down from 34% in Q1 2022.
61% said conditions were worse, up from 35%.
CEOs were more pessimistic about conditions in their own industries in Q2 2022:

CEOs’ expectations about the short-term economic outlook weakened in Q2:

19% of CEOs said they expected economic conditions to improve over the next six months, down from 50% in Q1.
60% expected conditions to worsen, up from 23%.
CEOs’ expectations regarding short-term prospects in their own industries declined in Q2:

How are CEOs Managing Input and Labor Costs?

Long range plans to strengthen supply chain:
How are CEOs planning to respond over the longer term to avoid future supply chain disruptions?

Almost half of all CEOs said they are diversifying global source countries; but cannot use solely U.S.-Mexico-Canada (USMCA) sources. An additional 35% said they are not experiencing any significant disruptions.

Geopolitical challenges:
What is the biggest challenge CEOs foresee by the end of 2022 and start of 2023, because of the Russian invasion of Ukraine?

More than one-third of CEOs said the biggest challenge they face from economic sanctions against Russia are input shortages and supply chain issues.

Over the next 5-10 years, what do you think will be the most likely long-term effect of current great power tensions among Russia, U.S. and China?

Close to 60% of CEOs said geopolitical tensions will likely result in the globe dividing into Western/democratic and China/Russian spheres.