January EI statistics reflect labour market conditions during the week of January 9 to 15, 2022.

With the spread of the Omicron variant of COVID-19, many jurisdictions had implemented stricter public health measures. Capacity limits or closures had been reintroduced in retail stores and high-contact settings such as restaurants, bars, concert halls and gyms.

According to the Labour Force Survey (LFS), unemployment rose by 106,000 to 1.3 million in January. The unemployed included 1.1 million Canadians who were looking for work and 200,000 who had a connection to a job, either because they were on temporary layoff or had arrangements to begin a new job in the near future. 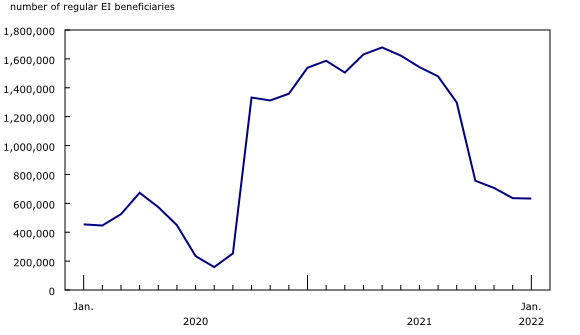 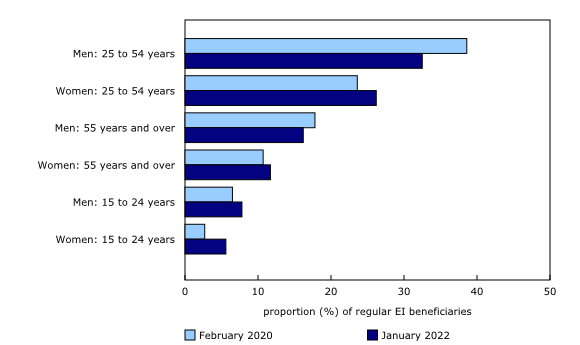 Five industries account for over half of regular EI recipients
In January, over half (54.8%) of regular EI recipients last worked in one of the following five industries: 21.7% in construction; 9.3% in accommodation and food services; 9.1% in manufacturing; 7.5% in administrative and support services; and 7.3% in retail trade (not seasonally adjusted). January LFS results showed that employment in accommodation and food services (-26.4%; -324,000) remained further from its pre-pandemic February 2020 level than all other industries.

The number of monthly claims holds steady in January
During January, there were 350,000 EI claims, compared with 432,000 in January 2021. The number of claims provides an indication of the number of people who could become beneficiaries. Claims data include initial and renewal claims received for any type of EI benefit, including special benefits.

Next release
Information on the profile of regular EI recipients for the week of February 13 to 19 will be released on April 21.

The number of beneficiaries is a measure of all people who received regular EI benefits from January 9 to 15, 2022. This period coincides with the reference week of the LFS.

Next release
Data on EI for February will be released on April 21.