In July, 506,000 Canadians received regular Employment Insurance (EI) benefits, up by 14,000 (+2.9%) compared with June. This was the first increase since January 2022, and also the first increase not associated with a tightening of public health restrictions since the beginning of the COVID-19 pandemic.

According to the Labour Force Survey (LFS), the unemployment rate in July remained at a record low of 4.9%. This was followed by an increase in unemployment of 106,000 (+10.5%) in August, as indicated by the LFS for that reference month. 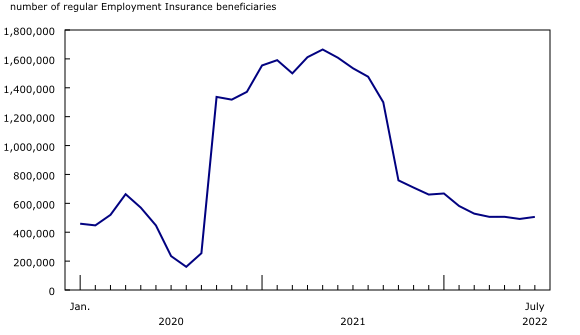 The increase in Windsor was primarily among beneficiaries who last worked in mechanical, electrical and electronics occupations (+410.8%; +3,000). The auto industry in Windsor has been hit by semiconductor chip shortages and has experienced multiple shutdowns since the previous year.

More core-aged women collected regular Employment Insurance benefits in July
The number of women receiving regular EI benefits rose by 8,000 (+4.0%) in July, accounting for most of the monthly increase. After decreasing in four of the last five months, there were 9,000 more (+7.7%) core-aged female regular EI recipients aged 25 to 54 in July compared with June. The number of EI beneficiaries fell for the sixth consecutive month among women aged 55 and older (-2.1%; -1,000) and women aged 15 to 24 (-1.0%; -200). 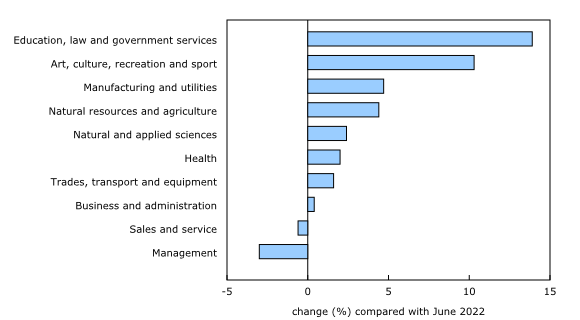 All data in this release are seasonally adjusted, unless otherwise specified. To model the effects of the COVID-19 pandemic, values for all series from March 2020 to November 2021 have been treated with a combination of level shifts and outliers in determining a seasonal pattern for seasonal adjustment. For more information on seasonal adjustment, see Seasonally adjusted data – Frequently asked questions.

The number of beneficiaries is a measure of all people who received regular EI benefits from July 10 to 16, 2022. This period coincides with the reference week of the LFS.

Next release
Data on EI for August will be released on October 20.