February EI statistics reflect labour market conditions during the week of February 13 to 19, 2022.

After a tightening of public health measures in late 2021 and early 2022, many measures had been eased by the February reference week. Several provinces had lifted, or were in the process of lifting proof-of-vaccination requirements and capacity limits in settings such as restaurants, retailers, theatres and gyms.

According to the Labour Force Survey (LFS), the unemployment rate dropped a full percentage point in February to 5.5%, as it approached an all-time low. 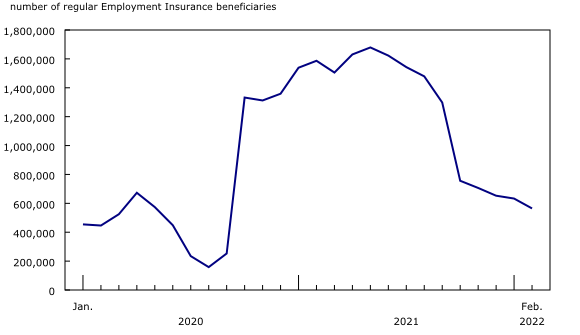 Prince Edward Island was the only province to see little change in regular EI beneficiaries, compared with January.

Beneficiaries from accommodation and food services fall as employment rebounds
The number of beneficiaries who most recently worked in accommodation and food services fell by 21,000 (-27.5%) between January and February 2022 (not seasonally adjusted). According to the February LFS, employment in the industry rebounded by 114,000 (+12.6%), after declining by a similar amount in January 2022.

Despite the decline, regular EI beneficiaries who recently worked in accommodation and food services accounted for 7.6% of all beneficiaries in February 2022, higher than the February average of 5.8% between 2018 and 2020 (not seasonally adjusted). 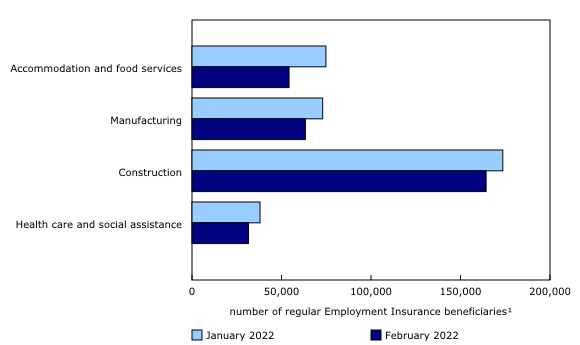 The construction industry regularly accounts for a large portion of all regular EI beneficiaries, particularly in the winter months. In February, almost one-quarter (23.0%) of regular EI recipients last worked in construction, down from the monthly average of 27.1% between 2018 and 2020 (not seasonally adjusted).

Among longer-term regular EI beneficiaries who last worked in sales and service occupations, just over one in five (21.3%) worked while receiving part of their EI benefits in February, a drop of 21.8 percentage points compared with January (not seasonally adjusted).

Monthly claims drop to lowest level since July 2021
During February, there were 256,000 EI claims, a decline of 94,000 (-26.8%) compared with January 2022. The number of claims provides an indication of the number of people who could become beneficiaries. Claims data include initial and renewal claims received for any type of EI benefit, including special benefits.

Next release
Information on the profile of regular EI recipients for the week of March 13 to 19 will be released on May 19.

The number of beneficiaries is a measure of all people who received regular EI benefits from February 13 to 19, 2022. This period coincides with the reference week of the LFS.

Next release
Data on EI for March will be released on May 19.