March EI statistics reflect labour market conditions during the week of March 13 to 19, 2022.

The decline in March coincides with information from the Labour Force Survey (LFS) showing the unemployment rate reaching a record low of 5.3% in March and employment growth totalling 409,000 in February and March. 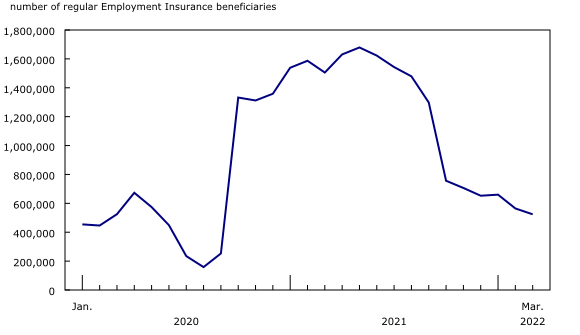 Widespread decreases in regular Employment Insurance beneficiaries across all major demographic groups
In March, the number of core-aged (25 to 54 years) men receiving regular EI benefits fell by 17,000 (-9.2%), more than twice the decrease among core-aged women (-8,000; -5.3%). This is in line with March LFS results showing employment up by 35,000 (+0.5%) among men and little changed among women in the core working age group.

The number of long-term regular Employment Insurance recipients continues to decline despite elevated long-term unemployment
Based on LFS results, as of March 225,000 people had been unemployed and continuously searching for work for 27 weeks or more, little changed from February 2022 and 45,000 (+24.9%) higher than in February 2020. This elevated level of long-term unemployed captured by the LFS is reflected in EI statistics. In March, there were 229,000 regular EI beneficiaries without earnings that had received regular EI benefits in at least 7 of the last 12 months, down 3,800 (-1.6%) from a month earlier (not seasonally adjusted). Among longer-term regular EI beneficiaries without earnings, three-quarter (75.8%) of the decline in the number of regular EI beneficiaries from February to March was due to a decrease (-5.4%; -3,000) in the number of recipients who last worked in sales and service occupations (not seasonally adjusted).

Chart 2: Trades, transport and equipment occupations had the largest proportion of longer-term regular Employment Insurance beneficiaries without earnings in March 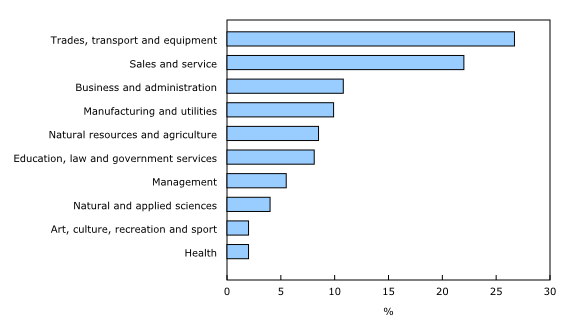 The number of monthly claims decreases in all provinces
During March, there were 225,000 EI claims, down 31,000 (-12.2%) compared with one month earlier, and the lowest since July 2021. The number of claims provides an indication of the number of people who could become beneficiaries. Claims data include initial and renewal claims received for any type of EI benefit, including special benefits.

Next release
Information on the profile of regular EI recipients for the week of April 10 to 16 will be released on June 23.

The number of beneficiaries is a measure of all people who received regular EI benefits from March 13 to 19, 2022. This period coincides with the reference week of the LFS.

Historical revision of EI data
With the release of Employment Insurance Statistics on June 23, Table 14-10-0009, which includes information on EI recipients by type of income benefit (not adjusted for seasonality) will be enhanced to include information on two additional benefit types: family caregiver benefits for children and family caregiver benefits for adults. In addition, all seasonally adjusted Employment Insurance Statistics tables will be updated on June 23, using updated seasonal factors. These data will be revised for January 2017 to March 2022.

Next release
Data on EI for April will be released on June 23.