In April, 20,000 (-3.8%) fewer Canadians received regular Employment Insurance (EI) benefits, bringing the total number of beneficiaries to 496,000. There were 1.2 million (-70.2%) fewer regular EI beneficiaries in April than in May 2021, when the number reached its COVID-19 pandemic peak.

According to the Labour Force Survey (LFS), the unemployment rate edged down 0.1 percentage points to 5.2% in April after reaching a record low of 5.3% in March. 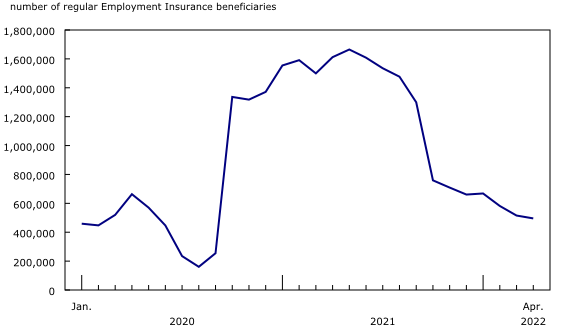 On a regional basis, the largest proportional declines in regular EI beneficiaries were in the census metropolitan areas (CMAs) of Vancouver (-17.5%; -4,000) and Abbotsford–Mission (-14.8%; -400) in British Columbia. Despite the decrease in recipients in April, the Vancouver CMA accounted for a higher share (42.1%) of regular EI beneficiaries in British Columbia than in February 2020 (35.5%), prior to the pandemic. According to the LFS estimates, the unemployment rate in the Vancouver CMA was 5.6% in April compared with 4.5% in February 2020.

Five industries account for just over half of regular Employment Insurance recipients
Just over half (51.5%) of regular EI recipients in April last worked in one of the following five industries: construction (22.2%); manufacturing (8.7%); administrative and support services (7.4%); retail trade (7.0%); and accommodation and food services (6.1%) (not seasonally adjusted). According to the LFS, the number of people working in construction decreased by 21,000 (-1.3%) in April, following four consecutive monthly increases. Despite the recent employment growth, the construction industry accounted for the largest share of EI beneficiaries for the seventh consecutive month. Of the beneficiaries in this industry, the vast majority of regular EI recipients were men (90.9%) (not seasonally adjusted).

Chart 2: Notable increase in beneficiaries in construction industry since October 2021 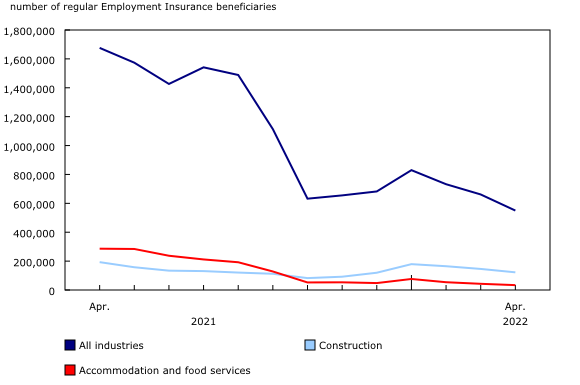 In the spotlight: the long-term unemployed in May 2022
EI recipients account for part of the broader unemployed population. Information about total unemployment is available from the LFS.

In the context of record-low unemployment rates, strong labour force participation, and record-high job vacancies, there has been heightened interest in understanding who may be able to fill open vacancies to help ease labour market tightness. One such group is the long-term unemployed—those who have been searching for work or on temporary layoff for 27 weeks or more—as measured by the LFS.

The long-term unemployed are a diverse group, both demographically and in relation to their past experience in the labour market. As of May, just over 1 in 10 (10.5%; 24,000) long-term unemployed people had never worked. People under 30 years of age accounted for over half (53.4%) of this group, which suggests that inexperience remains a barrier for some young people trying to enter the labour market (three-month moving averages; not seasonally adjusted).

Educational attainment may be another factor in facilitating the transition into employment. In May, nearly 3 in 10 (29.0%; 65,000) long-term unemployed people were those aged 25 and older whose highest level of education was high school or less. In contrast, this group accounted for fewer than 2 in 10 (18.4%) among the employed (three-month moving averages; not seasonally adjusted).

Differences in regional labour markets, and mismatches between the skills of potential workers and the skills required for vacancies may also influence a person's ability to find employment. In May, long-term unemployment as a proportion of total unemployment ranged from 9.7% in Prince Edward Island, to 25.3% in Newfoundland and Labrador.

In the coming months, data from the full suite of Statistics Canada's labour-related statistical programs will continue to shed light on Canada's tight labour market.

Next release
Information on the profile of regular EI recipients for the week of May 15 to 21 will be released on July 21.

All data in this release are seasonally adjusted, unless otherwise specified. To model the effects of the COVID-19 pandemic, values for all series from March 2020 to November 2021 have been treated with a combination of level shifts and outliers in determining a seasonal pattern for seasonal adjustment. For more information on seasonal adjustment, see Seasonally adjusted data – Frequently asked questions.

The number of beneficiaries is a measure of all people who received regular EI benefits from April 10 to 16, 2022. This period coincides with the reference week of the LFS.

Historical revision of Employment Insurance data
Seasonally adjusted series of EI statistics have been revised back to January 2017 to reflect the most recent seasonal patterns. Table 14-10-0009, which includes information on EI recipients by type of income benefits, has been updated to include two benefit types: family caregiver benefits for children and family caregiver benefits for adults.

Next release
Data on EI for May will be released on July 21.