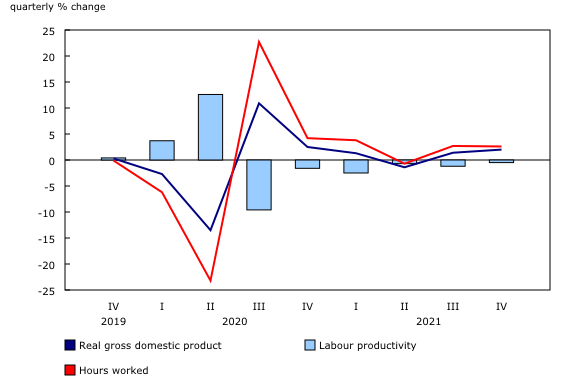 The public health measures in place in the fourth quarter were essentially the same as in the third quarter, and were some of the least restrictive since the start of the pandemic. Despite the emergence of the Omicron variant and the implementation of new public health rules starting in mid-December, growth in business output continued in the fourth quarter, even outpacing that of the previous quarter. Meanwhile, hours worked continued to increase at a similar pace as in the third quarter and again surpassed output growth.

Business output continues to grow at a higher rate than in the third quarter
Real gross domestic product (GDP) of businesses rose 2.0% in the fourth quarter, after increasing 1.4% in the previous quarter. As a result of this increase, output moved much closer to its pre-pandemic level (-1.1% compared with the fourth quarter of 2019).

Overall, all major industry sectors increased their output in the fourth quarter of 2021, except utilities (-0.1%).

Chart 2: Comparison of changes in business output and hours worked 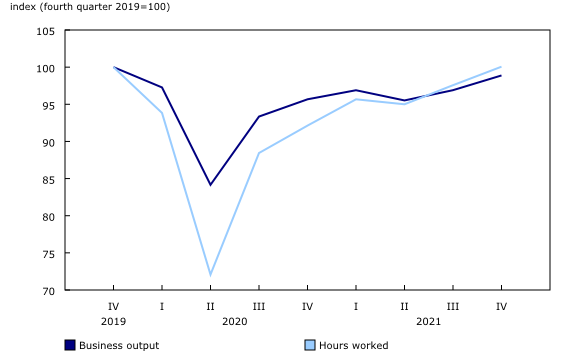 Hours worked in some sectors did not completely return to the levels seen in the fourth quarter of 2019, but differences between sectors did narrow. In total, 7 of the 16 industry sectors topped their pre-pandemic level. 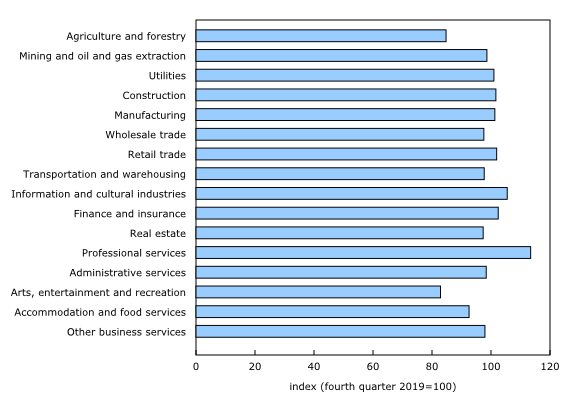 The increase in hours worked in the fourth quarter was largely due to the 2.2% gain in employment, while hours worked per job edged up 0.4%. The number of people with more than one job rose 5.5%, after increasing 7.6% in the third quarter. Meanwhile, the number of people who were absent without pay was down 1.9%, after falling 14.2% in the third quarter.

Losses in work hours in the business sector are similar to the third quarter
When only workers who were active or on paid leave are taken into account, the net effect of COVID-19 on hours worked in the business sector was a loss of 55.9 million hours in the fourth quarter. This loss was comparable to the one in the third quarter (-57.3 million hours).

At the industry level, the loss of work hours in the fourth quarter continued to affect most sectors and was also of similar magnitude as in the previous quarter.

The sectors most affected by the loss of work hours in the fourth quarter were the same ones affected since the pandemic began: other business services, retail trade, accommodation and food services, construction, professional services, and manufacturing. These six sectors, which comprise businesses that cannot operate without physical proximity among people, accounted for nearly 70% of hours lost in the fourth quarter.

Chart 4: Work hours lost in the fourth quarter 2021 because of COVID-19 pandemic, by industry, business sector 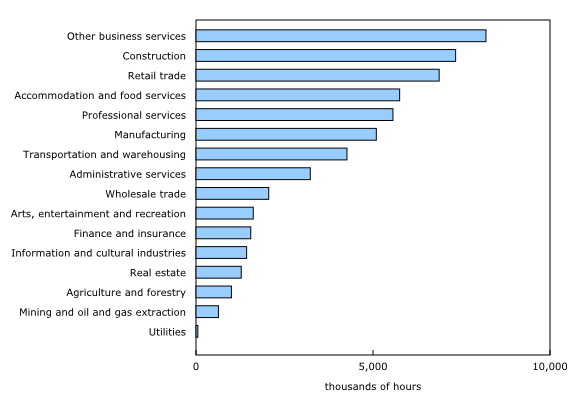 For the second consecutive quarter, other business services continued to post the largest loss of all sectors, with a net loss of 8.2 million hours in the fourth quarter. This sector includes a variety of businesses, such as personal and laundry services (including hair salons and beauty salons) and repair and maintenance services, whose activities were in large part affected by public health measures.

Overall, productivity was down in 10 of the 16 main industry sectors and was unchanged in construction.

In the fourth quarter, accommodation and food services (-6.1%) and real estate services (-3.5%) posted strong declines in their productivity. By contrast, the largest increases in productivity were in arts, entertainment and recreation (+7.8%) and in agriculture and forestry (+7.4%).

Impacts of the COVID-19 pandemic on hours worked in the business sector, fourth quarter of 2021
Estimates of hours worked in the business sector are mainly based on data from the Labour Force Survey (LFS). It should be noted that for hours worked (used to measure productivity), both main and secondary jobs are considered—not only the main job as in the LFS. The main survey for the LFS for the reference period that includes the months of October, November and December does not capture losses of work hours outside the reference weeks. To account for those, as with the previous seven quarters, the estimates of hours lost because of the pandemic were adjusted using a compilation of supplementary questions added to the LFS questionnaire in November, December 2021 and January 2022 for the respective reference months of October, November and December 2021. These adjustments are reflected in the data on hours worked and related measures (including labour productivity) for the fourth quarter of 2021.

Unit labour costs are almost the same level as in the third quarter
In Canadian businesses, both productivity (-0.5%) and average compensation per hour worked (-0.6%) decreased at a similar pace in the fourth quarter. As a result, labour costs per unit of output of Canadian businesses were stable (-0.1%) in the fourth quarter, after rising over the previous four quarters.

The average value of the Canadian dollar relative to the US dollar did not fluctuate in the fourth quarter. As a result, unit labour costs of Canadian businesses expressed in US dollars (-0.1%) were practically unchanged, when compared with the costs not adjusted for the exchange rate. By comparison, unit labour costs of American businesses edged up 0.1%, with both productivity (+1.6%) and hourly compensation (+1.7%) posting similar gains.

Annual averages for 2021
On average over the year 2021, labour productivity of Canadian businesses fell 6.9%, while hours worked rebounded much more than business output.

While 2020—the year the pandemic was declared—was characterized by stricter public health measures in most parts of the country, 2021 saw a net rebound in hours worked (+12.1%) and real GDP of businesses (+4.8%), thanks to high rates of vaccination against COVID-19 and further easing of public health restrictions. This was an unprecedented annual increase in hours worked and the largest increase in business output since 2000 (+6.1%).

In the United States, productivity of businesses rose 1.9% in 2021. This annual gain was driven by an increase in the GDP of American businesses (+7.2%), while hours worked were up 5.2%. These are the biggest annual increases since 1984, when they rose 8.9% and 5.9%, respectively.

In 2021, labour productivity of businesses (-6.9%) posted a greater decline than hourly compensation (-2.8%), which led to this annual increase in unit labour costs.

When the annual average 7.0% appreciation of the Canadian dollar relative to the US dollar in 2021 is taken into account, the unit labour costs of Canadian businesses expressed in US dollars jumped 11.8%. This was the biggest annual growth rate since 2003 (+14.5%), when the Canadian dollar appreciated strongly (+12.4%).

By comparison, unit labour costs of American businesses grew 3.4% in 2021.

Note to readers
Volatile data starting in the first quarter of 2020
For two years now, quarter-to-quarter data have been particularly volatile, reflecting the impacts of the pandemic and health measures on economic activity and the labour market. Given the strong variations over the last eight quarters, the percentage changes from the pre-pandemic level—i.e., from the fourth quarter of 2019—can better reflect the changes in productivity and related measures than percentage changes from quarter to quarter. However, the quarterly data in Table 1 of this release are presented only in the usual format: the percentage change from the same quarter in the previous year and the change from the previous quarter.

Revisions
With this release, data were revised back to the first quarter of 1997 at the aggregate and industry levels. These revisions are consistent with those incorporated in the annual benchmarks on provincial and territorial labour productivity and related measures, released on February 11, 2022. They are also consistent with those incorporated in the quarterly gross domestic product (GDP) by income and expenditure and monthly GDP by industry, released on March 1, 2022. In addition, indexes of all series at the aggregate level were subject to historical revision going back to 1981, as a result of revisions to the values for the 2012 reference year. However, the resulting revisions to growth rates were negligible.

Labour productivity is a measure of real GDP per hour worked.

Unit labour cost is defined as the cost of workers' wages and benefits per unit of real GDP.

The approach to measuring real output in the business sector differs from the one that is used in the estimates by industry. For the business sector, output is measured using the expenditure-based GDP approach at market prices. This approach is similar to that used for the quarterly measures of productivity in the United States. However, output by industry is based on the value added at basic prices.

All the growth rates reported in this release are rounded to one decimal place. They are calculated with index numbers rounded to three decimal places, which are now available in data tables.

Next release
Labour productivity, hourly compensation and unit labour cost data for the first quarter of 2022 will be released on June 3.

Products
The Economic accounts statistics Portal, accessible from the Subjects module of our website, features an up-to-date portrait of national and provincial economies and their structures.

The Latest Developments in the Canadian Economic Accounts (Catalogue number13-605-X) is available.