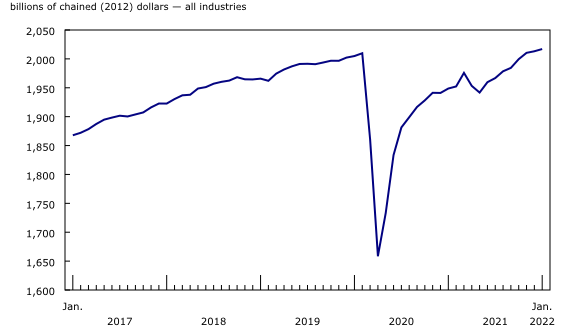 Advance information indicates an approximate 0.8% expansion in real GDP in February. Notable increases were observed in the manufacturing sector as well as in mining, quarrying, and oil and gas extraction, accommodation and food services, and construction. Utilities contracted following strong activity in January, due primarily to cold temperatures. Owing to its preliminary nature, this estimate will be updated on April 30 with the release of the official GDP data for February.

Construction activity rebounds in January
The construction sector expanded 2.8% in January, up for the third time in four months, as all subsectors rose. 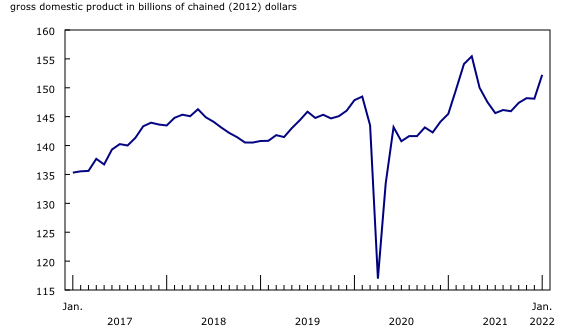 Residential building construction grew 4.3% in January more than offsetting the previous two months of contraction. The growth in January—the largest monthly growth since March 2021—was broad-based, with home alterations and improvements along with apartment-type construction leading the way. Single family home construction was up for the second month in a row in January 2022, following seven monthly pullbacks.

Wholesale trade keeps growing
The wholesale trade sector grew 3.1% in January, the largest monthly growth rate since July 2020 and the sixth consecutive month of growth, as seven of nine subsectors contributed to the increase.

Machinery, equipment and supplies wholesaling rose 5.5% in January as large imports of logging, construction, mining, and oil and gas field machinery and equipment in December 2021 made their way through distribution channels.

The building material and supplies wholesaling subsector rose 6.3% in January 2022, driven by increases in all industries comprising the subsector, as construction activity increased.

Following three months of growth, the motor vehicle and motor vehicle parts and accessories wholesaling subsector contracted 5.1% in January, as exports and imports of motor vehicles and parts decreased in the month.

Utilities surge on higher demand
Utilities rose strongly in January (+4.0%), the largest monthly growth rate since January 2016. Below seasonal temperatures in Western Canada that started in December 2021, continued into January 2022 and spread to Central Canada, increased the demand for both electricity and natural gas for heating purposes in numerous parts of the country.

Broad-based growth in the retail trade sector
Retail trade increased 2.5% in January, partly offsetting the 2.8% decline in December 2021, as 10 of 12 subsectors were up.

Higher activity at motor vehicle and parts dealers (+5.1%) contributed the most to the growth as a higher volume of imports of motor vehicles in the fourth quarter of 2021 injected some much needed inventory into dealers' lots. Gains in building material and garden equipment and supplies (+8.8%) and furniture and home furnishings stores (+9.2%) further contributed to growth.

Activity at clothing and clothing accessories stores was down 2.8% in January, following an 11.5% drop in December 2021, as the reintroduction of public health measures and retailing capacity restrictions contributed to the decline.

Omicron wave continues to stymie some services-based industries
As the Omicron variant continued to spread through Canada in January, different levels of government across the country reintroduced some restrictions in order to dampen its progress. The Government of Canada reinstated its advisory to avoid non-essential travel outside Canada and introduced the requirement that all travellers entering Canada, regardless of the length of their stay, provide a negative molecular PCR test for COVID-19. Provincial and municipal governments across the country reintroduced a host of indoor gathering capacity-restrictions, closures and service cancellations. 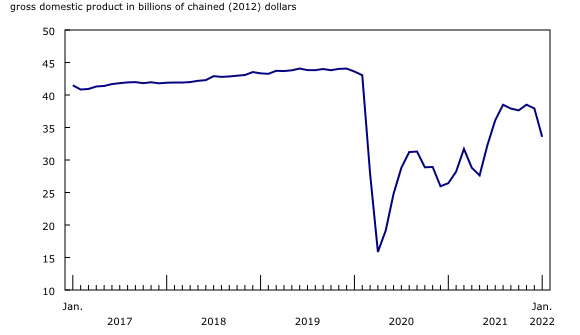 Food services and drinking places were down 10.2% in January as activity decreased at all types of establishments and across all provinces.

Accommodation services fell 14.7% in January, fully offsetting the previous five monthly gains. With a lower number of international travellers entering Canada and reduced domestic travel in January, traveller accommodations contracted for the first time since May 2021.

Air transportation declined 28.1%, a result of lower movement of passengers and goods, as some Canadian carriers cancelled flights and reduced schedules in January.

Urban transit was down 27.3%, as a return to online learning for students, along with closures and reduction of capacity limits for businesses, suppressed the level of ridership in January.

Amusement, gambling and recreation declined 11.6% in January. While most provinces kept casinos, bingo halls and other gaming terminals open at a reduced capacity, their closures in Quebec and Ontario contributed the most to the decline. Similarly, the amusement and recreation industries decreased 5.9% in January as many amusement, gym and indoor recreational facilities faced capacity restrictions.

Performing arts, sports and heritage institutions were down 9.5% in January as attendance at cultural and sporting events was greatly reduced. Professional sports games took place in either empty or partly empty arenas and stadiums across the country in January, while some games were moved to later in the year in hopes of higher attendance at that future point.

The information and cultural industries declines for the first time in a year
The information and cultural industries were down 0.8% in January, the first decrease since January 2021, as four of six subsectors posted declines. The motion picture and sound recording subsector (-6.4%) contributed the most to the decrease as movie theatres, and movie recording and production sets were closed in many parts of the country.

Mining and quarrying (except oil and gas) decreased 1.1% as contractions in metal ore mining (-4.8%) more than offset gains in coal mining (+11.9%) and non-metallic mineral mining (+0.7%). Support activities for mining, and oil and gas extraction declined 1.1% in January on account of lower rigging services.

Financial investment services contribute to growth in finance and insurance
Finance and insurance increased 0.3% in January in large part due to increased activity in financial investment services (+2.6%). With the interest hike timelines of central banks accelerating around the world, many investors expected and began pricing in numerous interest rate hikes throughout 2022, contributing to an elevated volatility in debt and equity markets in January. Bond yields flattened and trading activity on the Toronto Stock Exchange grew. Depository credit intermediation and monetary authorities edged down 0.2%. 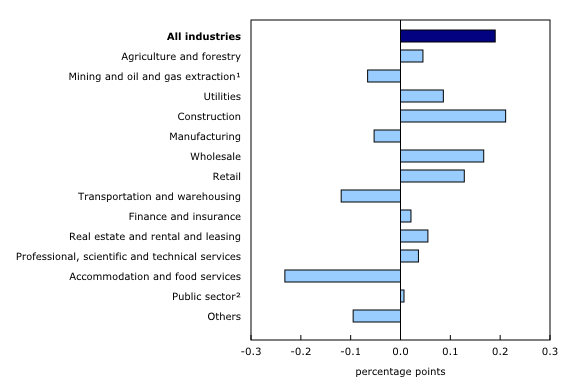 Note to readers
Monthly data on gross domestic product (GDP) by industry at basic prices are chained volume estimates with 2012 as the reference year. This means that the data for each industry and each aggregate are obtained from a chained volume index multiplied by the industry's value added in 2012. The monthly data are benchmarked to annually chained Fisher volume indexes of GDP obtained from the constant-price supply and use tables (SUTs) up to the latest SUT year (2018).

For the period starting in January 2019, data are derived by chaining a fixed-weight Laspeyres volume index to the prior period. The fixed weights are 2018 industry prices.

This approach makes the monthly GDP by industry data more comparable with expenditure-based GDP data, which are chained quarterly.

An advance estimate of industrial production for February 2022 is available upon request.

For more information on GDP, see the video "What is Gross Domestic Product (GDP)?"

Revisions
With this release of monthly GDP by industry, revisions have been made back to January 2021.

Each month, newly available administrative and survey data from various industries in the economy are integrated, resulting in statistical revisions. Updated and revised administrative data (including taxation statistics), new information provided by respondents to industry surveys, data confrontation and reconciliation process and standard changes to seasonal adjustment calculations are incorporated with each release.

Next release
Data on GDP by industry for February will be released on April 30.

The Economic accounts statistics portal, accessible from the Subjects module of the Statistics Canada website, features an up-to-date portrait of national and provincial economies and their structure.