Canadian home sales edged up 1.0% in January from December, down by 10.7% year-over-year; newly listed properties dropped by 11.0% month-over-month in January, national average home price up 21.0% year-over-year to a record C$748,450 in January: CREA 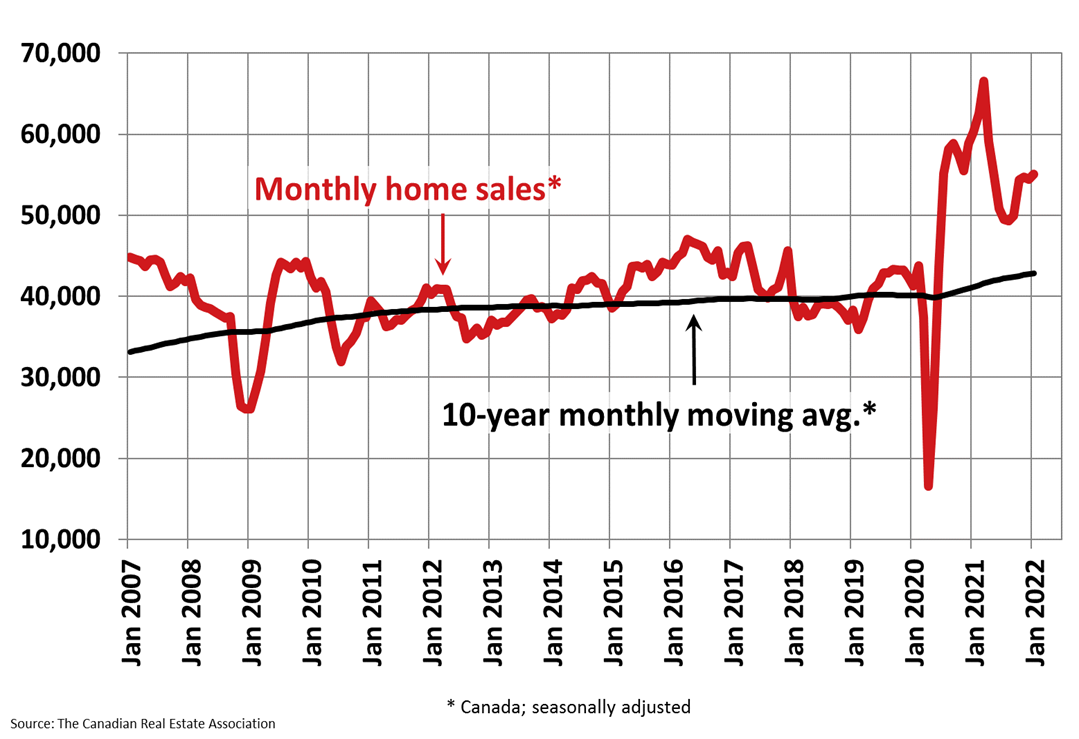 Home sales recorded over Canadian MLS® Systems edged up 1% between December 2021 and January 2022. Activity has been generally stable now for four months, running in between the record-highs of last spring and the slowdown posted last summer.

There was an even split between the number of local markets where sales were up and those where sales were down in January, with gains in Calgary, Greater Vancouver and Ottawa offsetting declines in Winnipeg, Montreal, the Fraser Valley and Hamilton-Burlington.

“As expected, January was pretty quiet on the new listings side of things, with this year’s first big new supply numbers unlikely to emerge until the weather starts to warm up a bit,” said Cliff Stevenson, Chair of CREA. “The question is will that supply be overwhelmed by demand as it was last spring, or will we start to see the re-emergence of some of the many would-be sellers who have been hunkered down for the last two years? Either way it is shaping up to be another interesting year for the housing market, and your local REALTOR® has the information and guidance you’ll need if you are planning on buying or selling in 2022,” continued Stevenson.

“The ideal situation between now and the summer would be that a huge surge of sellers come forward looking to sell in the spring 2022 market,” said Shaun Cathcart, CREA’s Senior Economist. “If that were to occur, similar to 2021, we’d likely see a massive number of sales take place which would get a lot of frustrated buyers into homeownership, and we’d likely see some cooling off on the price growth side if those offers are spread across more listings. Those are all things this market needs. It really comes down to how many properties come up for sale in the months ahead.”

The number of newly listed homes dropped by 11% month-over-month in January, with a pullback in the GTA accounting for more than half of the national decline.

There were just 1.6 months of inventory on a national basis at the end of January 2022 — tied with December 2021 for the lowest level ever recorded. The long-term average for this measure is a little over 5 months.

In line with the tightest market conditions ever recorded, the Aggregate Composite MLS® Home Price Index (HPI) was up a record 2.9% on a month-over-month basis in January 2022. The gains were similar to those recorded in the previous three months. 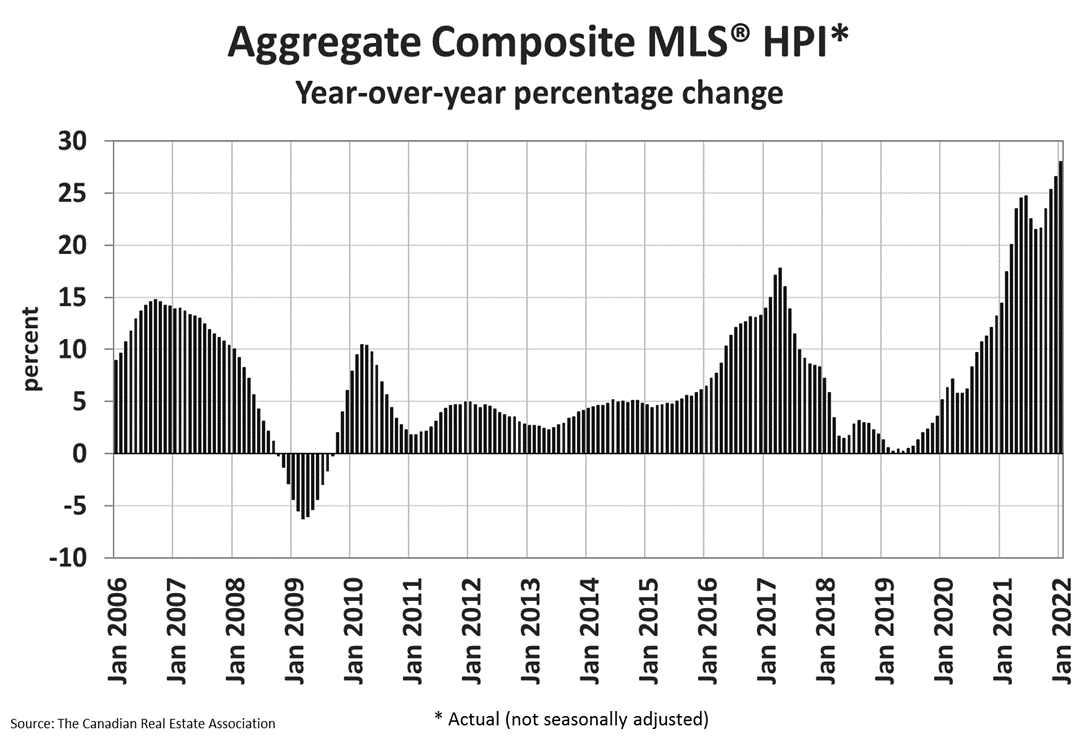 The non-seasonally adjusted Aggregate Composite MLS® HPI was up by a record 28% on a year-over-year basis in January.

Looking around the country, year-over-year price growth is in line with the national figure at 28% in B.C., though it remains lower in Vancouver, close to on par with the provincial number in Victoria, and higher in most other parts of the province.

Year-over-year price gains are still in the mid-to-high single digits in Alberta and Saskatchewan, while gains are running at about 13% in Manitoba.

Ontario saw year-over-year price growth remain above 30% in January, with the GTA having now caught up with the pace of provincial gains. The rest of the province is a mixed bag, up in between 25% and 40% on a year-over-year basis, save for Ottawa where prices are running at 16% year-over-year.

Greater Montreal’s year-over-year price growth remains at a little over 20%, while Quebec City was about half that.

Price growth is running above 30% in New Brunswick (higher in Greater Moncton, lower in Fredericton and Saint John), 27% on Prince Edward Island, and Newfoundland and Labrador is now at 12% year-over-year.

The MLS® HPI provides the best way to gauge price trends because averages are strongly distorted by changes in the mix of sales activity from one month to the next.