Wholesale sales rise for a fourth consecutive month
Wholesale sales rose 3.5% in November to $75.6 billion, the fourth consecutive monthly increase. Sales increased in six of the seven subsectors, representing nearly 99% of total wholesale sales. The largest increases came in the building materials and supplies, and miscellaneous products subsectors. The growth came despite the impact of severe flooding and transportation disruptions in British Columbia in November. 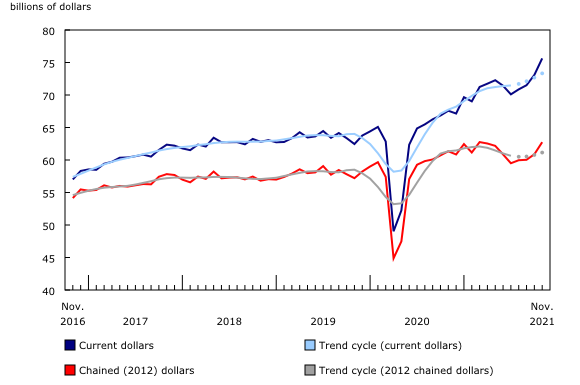 Miscellaneous wholesaler sales grew 5.0% to $11.3 billion in November, on the strength of increases in the agricultural supplies (e.g., feed and seed), and the chemical and allied product industries. Sales hit an all-time high in November 2021, and were 29.3% higher than in November 2020. The increases partially reflected ongoing demand for Canadian potash abroad, as exports of potash rose 9.7% in November 2021.

Motor vehicle and motor vehicle parts and accessories sales rose 4.5% in November to $11.4 billion. It was the second consecutive monthly increase in the subsector, reaching the highest level since February 2020, which was before the pandemic. Many motor vehicle assembly plants across North America expanded production in November, as some semi-conductor chips were received.

Overall, it is estimated that, nationally, the flooding caused approximately $600 million of loss in wholesale sales. The hardest hit industries were the agricultural supplies industry which reported $105 million in lost sales, and the lumber, millwork and other building supplies industry, which reported $85 million in lost sales. However, lost sales were not the largest impact of the flooding. The significant majority of respondents affected by the storms indicated that logistical and shipping issues were the major concern. As such, delayed sales, delayed shipments, reduced access to raw materials and increased costs for shipping via air cargo were the main effects of the inundation.

Alberta recorded its largest monthly increase on record, with a 12.1% jump in sales to $8.3 billion, which was also the highest level ever. The machinery, equipment and supplies subsector led the increase, up 16.2% to $2.5 billion, as wholesalers of construction, forestry, mining and industrial machinery, equipment and supplies reported a 25.2% increase in sales. Together with higher sales in the food, beverage and tobacco (+14.9%), and building material and supplies (+13.3%) subsectors, the three subsectors accounted for 86% of the province's monthly increase. Farm product wholesalers reported the only decrease, down 4.0% to $138.9 million.

Manitoba and Saskatchewan also saw record sales in November. The growth in the Prairie provinces reflected the strength of the energy product sector and high commodity prices for items such as chemical fertilizer and potash.

Sales in Ontario rose for the fifth consecutive month, up 2.2% to $38.2 billion in November. The increase was led by the building material and supplies subsector, up 7.7% to $5.2 billion, closely followed by the motor vehicle and motor vehicle parts and accessories subsector (+4.8%), and the miscellaneous subsector (+6.3%). The gains in these three subsectors totalled $1.0 billion, which was dampened by a 3.8% fall in sales of food, beverage and tobacco. Notwithstanding decreased sales in three of seven subsectors, sales in Ontario were also the highest on record.

In Quebec, sales rose 4.7% to $14.6 billion in November. The largest gain came from the building material and supplies subsector, up 13.2% to $2.6 billion, which accounted for 46% of Quebec's increase. All component industries of the subsector had higher sales; however, nearly half was because of a 28.4% increase in metal service centre sales.

Value of inventories continues to climb
The value of wholesale inventories expanded 4.3% to $103.5 billion in November. This was the seventh consecutive month of growth, and a new high for inventories, which crossed the 100-billion mark for the first time on record.

Five of seven subsectors had larger inventories at the end of November; they comprised 89% of the value of inventories in the sector.

Inventories in the personal and household goods subsector grew 11.2% to $17.9 billion. All component inventories were larger in November, but the increase was driven by pharmaceuticals and pharmacy supplies, which accounted for 72% of the change and 45% of inventories in the subsector.

Building material and supplies merchant wholesalers reported a 7.7% increase in the value of their inventories, which stood at $19.7 billion at the end of the month. Inventories in all component industries grew, but the inventories of metal service centres grew the most, up 18.8% to $6.1 billion. The contribution of metal service centres accounted for roughly two-thirds of the change in the subsector, despite comprising approximately one-third of the value of its inventories.

The inventory-to-sales ratio increased from 1.36 to 1.37 in November. This ratio is a measure of the time (in months) required to exhaust inventories if sales were to remain at their levels.

Next release
Wholesale trade data for December 2021 will be released on February 16, 2022.

Products
Please note that the tables available on the website represent a subset of the data available with this release. The full dataset is available upon request by contacting Jeff Paul (jeff.paul@statcan.gc.ca).