Retail sales were virtually unchanged in March. Sales were up in 10 of 11 subsectors, led by higher sales at gasoline stations (+7.4%). Lower sales at motor vehicle and parts dealers (-6.4%) erased the gains observed in the remaining subsectors.

In volume terms, retail sales were down 1.0% in March.

Given the continually evolving economic situation, Statistics Canada is providing an advance estimate of retail sales, which suggests that sales increased 0.8% in April 2022. Owing to its early nature, this figure will be revised. This unofficial estimate was calculated based on responses received from 54.3% of companies surveyed. The final average response rate for the survey over the previous 12 months has been 92.1%. 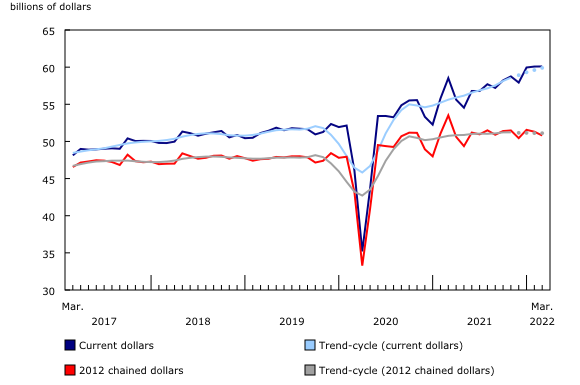 Sales at gasoline stations rise while sales at motor vehicle and parts dealers decline
Receipts at gasoline stations were up 7.4% in March. This was the third consecutive increase and tenth gain in the last 11 months. In volume terms, sales were up 3.1%. Gasoline prices rose 11.8% on a monthly basis, partly due to uncertainty surrounding supply following Russia's invasion of Ukraine.

Sales fell 6.4% at motor vehicle and parts dealers, led by lower sales at new car dealers (-5.9%). This was the largest decline at motor vehicle and parts dealers since sales plunged 42.8% at the onset of the COVID-19 pandemic in April 2020. The Bank of Canada's Monetary Policy Report noted that semiconductor chip shortages are continuing to impact production and prices for motor vehicles. The report also noted that while consumption growth for most goods is expected to moderate, spending on motor vehicles should pick up as supply chain shortages ease.

Core retail sales rise
Leading the increase in core retail were higher sales at building material and garden equipment and supplies dealers (+3.7%). Sales were up for the seventh time in the last eight months.

Receipts rose 0.9% at food and beverage stores, led by higher sales at supermarkets and other grocery stores (+1.6%). The Consumer Price Index noted that food prices continued to rise in March, up 8.7% from the previous year. Higher input prices and transportation costs have continued to impact grocery prices.

Chart 2: Sales increase in 10 of the 11 subsectors in March 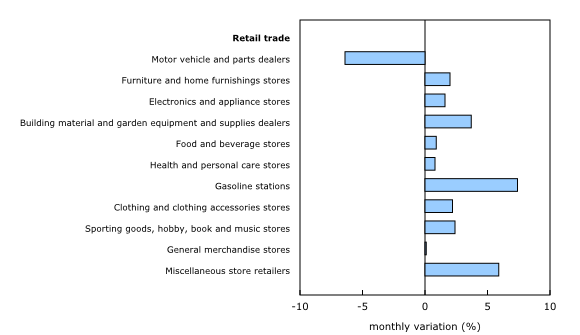 Sales rose 0.3% in Ontario, also on higher sales at gasoline stations. In contrast, sales edged down 0.3% in the census metropolitan area (CMA) of Toronto.

For more information on the Bank of Canada Monetary Policy Report, please consult the report here.

Next release
Data on retail trade for April will be released on June 21, 2022.