Retail sales fell 1.8% to $57.0 billion in December. Lower sales at clothing and clothing accessories stores (-9.5%) and furniture and home furnishings stores (-11.3%) led the decline, which coincided with concerns over the spread of the COVID-19 Omicron variant in December.

Sales were down in 8 of 11 subsectors, representing 62.9% of retail trade.

In volume terms, retail sales were down 2.5% in December.

Retail sales were up 1.7% in the fourth quarter of 2021, marking its second consecutive quarterly increase. In volume terms, quarterly retail sales increased 0.4%.

Severe flooding in British Columbia and the Atlantic provinces in November 2021 damaged infrastructure and led to evacuations in affected regions, resulting in major disruptions to the business operations of retailers across the country. Based on respondent feedback, 15% of retailers continued to be impacted in December by the floods and evacuations in British Columbia and the Atlantic provinces. Disruption in transportation continued to be the most impacted business operation in December, with 13% of retailers reporting it as an issue, in contrast to 16% of retailers reporting this in November.

Given the rapidly evolving economic situation, Statistics Canada is providing an advance estimate of retail sales, which suggests that sales increased 2.4% in January 2022. Owing to its early nature, this figure will be revised. This unofficial estimate was calculated based on responses received from 41.7% of companies surveyed. The average final response rate for the survey over the previous 12 months has been 90.0%. 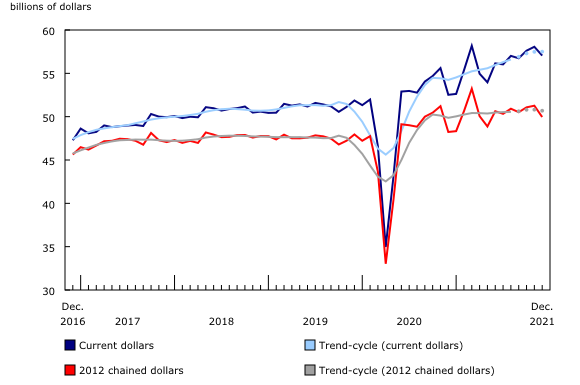 Sales were down at furniture and home furnishings stores (-11.3%), which fell for the second consecutive month. Lower sales at furniture stores (-10.2%) contributed the most to the subsector decrease.

Following four consecutive monthly gains, sales at building material and garden equipment and supplies dealers fell 5.0% in December. The decrease comes following higher sales in November, when this subsector experienced its fastest pace of growth (+5.0%) since March 2021. Despite the decrease in December, the level of sales in this subsector remained elevated compared with pre-pandemic levels recorded in December 2019.

Sales at motor vehicle and parts dealers increased 0.5% in December. The increase was largely the result of gains at automotive parts, accessories and tire stores (+9.1%), which recorded its largest increase since February 2021 as vehicle retention rates remain elevated. Sales were also up at other motor vehicle dealers (+8.1%), while receipts at new car dealers (-0.4%) and used car dealers (-4.1%) posted their second consecutive declines.

Chart 2: Sales decrease in 8 of 11 subsectors in December 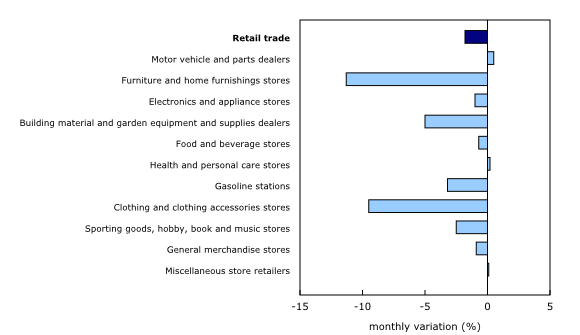 Leading the decrease among the provinces were lower sales in Ontario (-1.8%). Contributing to this decline were lower sales at clothing and clothing accessories stores as well as building material and garden equipment and supplies dealers. In the census metropolitan area (CMA) of Toronto, sales were down 1.4%.

Sales in Alberta fell 2.3% in December, led by lower sales at food and beverage stores. This was the largest decline in Alberta since December 2020 when retail sales fell 4.1%.

Retail sales in 2021
The COVID-19 pandemic continued to impact the retail landscape in 2021. The easing of public health measures and increasing vaccination rates allowed consumers greater access to retailers at various points throughout the year, resulting in a rebound of households' retail spending. However, increased demand for consumer goods as the economy re-opened coincided with global supply chain constraints, impacting the price and availability of products sold at retailers across the country.

Canadian retailers finished 2021 with $674 billion in sales, up 11.6% from 2020 with increases observed in all subsectors. This increase comes in the wake of a decline in 2020, when retail sales experienced its largest drop since the 2009 global financial crisis. In volume terms, retail sales increased 8.4% in 2021.

Motor vehicle and parts dealers lead the gain in retail sales
Leading the gain in retail sales was motor vehicle and parts dealers (+17.9%). Sales at new car dealers were up 18.5% and accounted for about one-fifth of retail sales in 2021. The gains recorded at new car dealers coincided with a rebound in household spending and higher prices of passenger vehicles, the latter of which was largely attributable to the global shortage of semiconductor chips that impacted the supply of new motor vehicles throughout much of 2021. Sales at used car dealers were up 21.7% in 2021 amid limited new vehicle inventory and higher rates of vehicle retention.

Core retail sales up on higher sales at general merchandise stores and building material and garden equipment and supplies dealers
Core retail sales increased 7.7% in 2021, a faster pace than that of 2020 (+4.4%), largely due to the resumption of in-person shopping in the second half of 2021. The increase in core retail was led by gains at general merchandise stores (+8.6%), which were considered essential retailers during lockdowns.

Consumers continued to spend on home improvement projects as higher sales at building material and garden equipment and supplies dealers (+14.1%) contributed to the overall increase in retail trade. Record levels of sales in this subsector were recorded in March, when consumers across the country took advantage of good weather and fewer in-store restrictions to focus on household projects. This increase coincided with a surge in the price of lumber in the late winter and early spring of 2021. Higher sales of lumber, renovation materials and supplies continued to bolster sales in this subsector above their pre-pandemic levels throughout the summer months.

Retail sales of clothing and clothing accessories stores rose 20.6% in 2021 after falling 26.7% in 2020. Higher sales were recorded at all three store types and were led by increases at clothing stores, coinciding with eased restrictions on social gatherings and in-person shopping at non-essential retailers in the latter half of 2021. However, despite reaching pre-pandemic levels for the first time in July 2021, annual sales at clothing and clothing accessories stores have not yet recovered to pre-pandemic levels observed in 2019 due to lower sales in the first half of 2021.

This early indicator is a special product being provided in the context of the COVID-19 pandemic to offer Canadians timely information on the retail sector. The data sources and methodology used are exactly the same as those outlined on the Monthly Retail Trade Survey information page.