Canada's payroll employment rose by 126,000, or 0.7% in April led by gains across all provinces except for Quebec; average weekly earnings unchanged from March at C$1,170: Statistics Canada

In April, for the first time, payroll employment in all provinces had either returned to or surpassed levels seen in February 2020, prior to the COVID-19 pandemic. Proportionally, Prince Edward Island (+4,400; +6.4%), New Brunswick (+16,900; +5.2%) and British Columbia (+87,500; +3.7%) were the provinces furthest above their pre-pandemic level. As of April, all provinces had eased public health measures around capacity limits, allowing most businesses to operate without pandemic-related restrictions. 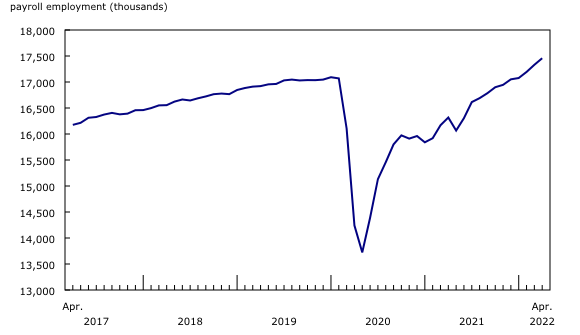 Payroll employment continues to grow in both the services-producing and goods-producing sectors in April
Payroll employment in the services-producing sector increased by 90,300 (+0.6%) in April, bringing the total increase to 314,300 (+2.3%) since February 2022, when public health measures related to COVID-19 began to ease in most provinces. Gains were recorded in 11 of the 15 subgroups in the sector, driven by accommodation and food services (+34,500; +2.9%) and educational services (+9,700; +0.7%).

In April, payroll employment in the sector was 118,200 (-8.8%) below its pre-pandemic level, likely due to the fewer active businesses in accommodation and food services and other tourism industries reported in February 2022 compared with February 2020. All industries within the sector were below their pre-pandemic levels, with the exception of rooming and boarding houses (+600; +7.8%).

Of the six provinces that surpassed pre-pandemic payroll employment levels in educational services in April, New Brunswick grew the most (+6.3%), followed by Nova Scotia (+6.0%). However, payroll employment in educational services for Newfoundland and Labrador (-7.1%), Alberta (-2.5%), British Columbia (-2.2%) and Ontario (-0.5%) was still below February 2020 levels. 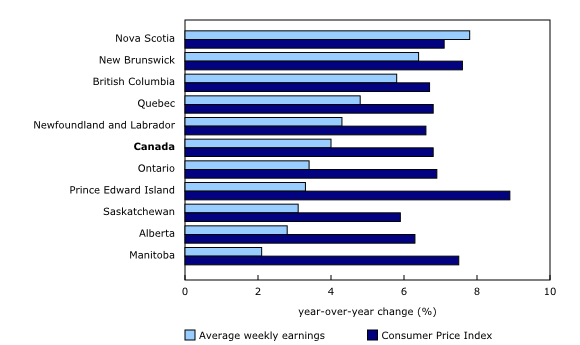 Overall job vacancies continue to increase in April
Across all sectors, employers in Canada were actively seeking to fill about one million (1,001,100) vacant positions at the beginning of April, up 2.4% (+23,300) from the previous month and up 44.4% (+308,000) from April 2021 (not seasonally adjusted). Experimental data developed by Statistics Canada to remove seasonal variations indicated that the month-over-month increase in April was in large part due to seasonal patterns, as job vacancies typically increase in the spring and summer. 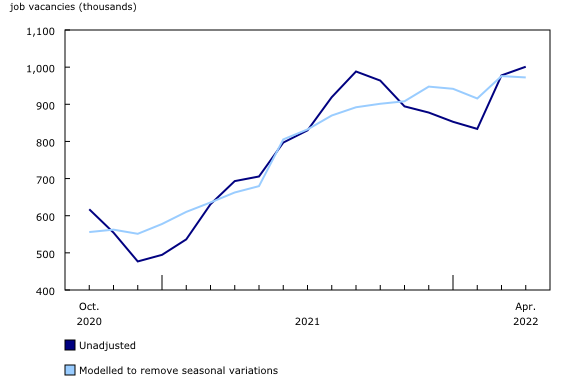 The job vacancy rate, which measures the number of vacant positions as a proportion of all positions (vacant and filled), was 5.8% in April, up from 4.4% in April 2021 (not seasonally adjusted).

For more information on trends regarding the unemployment-to-job vacancy ratio and current labour shortages, see "Labour shortages trends in Canada."

Record high job vacancies in many sectors
The number of job vacancies in the construction sector reached a new high of 89,900 in April, up 15.4% (+12,000) from March and up 43.3% (+27,200) from April 2021. The job vacancy rate was 7.9% in April 2022, the highest monthly rate in the sector since comparable data became available in October 2020. The month-over-month increase was partly attributable to seasonal variations, as job vacancies typically trend up for most of the spring and summer months in this sector.

Job vacancies also increased to a record high in April in professional, scientific and technical services (73,700); transportation and warehousing (52,000); finance and insurance (49,900); arts, entertainment and recreation (22,200); and real estate and rental and leasing (13,500).

Job vacancies up in manufacturing and little changed in accommodation and food services
In manufacturing, there were 90,400 vacant positions in April, up 7.3% from March and up 30.7% from April 2021. The job vacancy rate was 5.6%, matching the record high rate observed in October 2021.

In accommodation and food services, employers were actively seeking to fill 153,000 vacant positions in April, little changed from the previous month. The job vacancy rate was 11.9%, the highest of any sector. According to the Canadian Survey on Business Conditions for the second quarter of 2022, 24.6% of businesses in accommodation and food services expected to have more vacant positions over the next three months, compared with 8.8% for all businesses. This sector had the lowest average offered wage for vacant positions of any sector in the first quarter of 2022 at $15.85 per hour, despite a larger year-over-year average offered wage growth recorded in the sector (+5.4%) compared with all sectors combined (+2.5%).

Job vacancies down in health care and social assistance and retail trade
In the health care and social assistance sector, the number of job vacancies decreased 15.1% to 125,200 in April from its peak of 147,500 reached in March 2022, but was 21.3% higher than in April 2021. Payroll employment in April 2022 was little changed compared with the previous month.

Unless otherwise specified, average weekly hours data are for hourly and salaried employees only and exclude businesses that could not be classified to a North American Industry Classification System (NAICS) code.

Next release
Data on payroll employment, earnings and hours, and job vacancies for May 2022 will be released on July 28, 2022.