The number of employees receiving pay or benefits from their employer—measured by the Survey of Employment, Payrolls and Hours (SEPH) as payroll employment—increased by 118,100 (+0.7%) in March. The increase in payroll employment coincided with the continued easing of public health measures, as remaining capacity limits affecting business operations had generally been lifted by the first two weeks of March, although some combination of masking, proof of COVID-19 vaccination, or COVID-19 testing remained a requirement in some settings in certain jurisdictions. 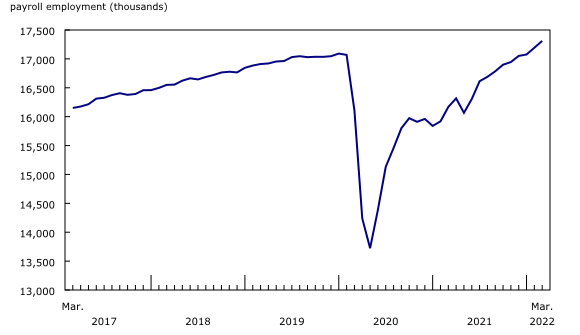 Nationally, more than half of the subsectors within retail trade reported payroll employment increases in March, led by food and beverage stores (+7,400; +1.4%) and clothing and clothing accessories stores (+3,300; +1.7%). 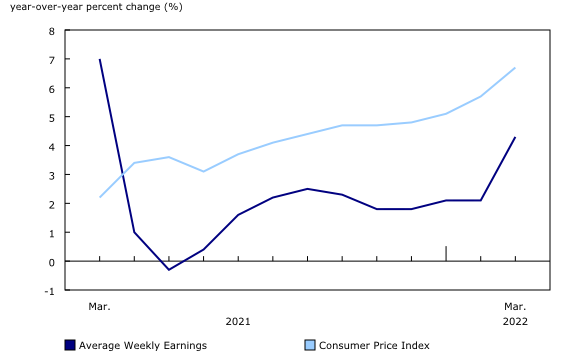 Of all sectors, utilities recorded the largest year-over-year increase in average weekly earnings in March (+11.7% to $2,011), followed by finance and insurance (+12.1% to $1,625) and professional, scientific and technical services (+8.0% to $1,633). Arts, entertainment and recreation (-4.2% to $693) was the only sector in March to report a year-over-year decrease in average weekly earnings, likely due, in part, to compositional changes in employment resulting from lower-paid employees returning to work following the removal of most capacity limits and proof-of-vaccination requirements in most provinces.

The job vacancy rate, which measures the number of vacant positions as a proportion of all positions (vacant and filled), was 5.9% in March 2022, matching the record high observed in September 2021 (not seasonally adjusted).

Vacancies increase by more than one-third in both accommodation and food services and retail trade
In the accommodation and food services sector, the number of vacancies rose 37.2% (+42,900) in March 2022. Following this increase, employers were seeking to fill a total of 158,100 positions. The job vacancy rate was 12.8%, the highest across all sectors for the 11th consecutive month (not seasonally adjusted).

Record level of job vacancies in health care and social assistance and in construction
Employers in health care and social assistance were seeking to fill a record-high 154,500 vacant positions in March 2022, up 16.0% (+21,300) from February. The job vacancy rate climbed to a new high of 6.6% in March after plateauing at 5.8% during the previous three months.

The number of vacancies also rose to an unprecedented high (81,900) in the construction sector in March. The increase in the month (+26.6%; +17,200) followed five consecutive monthly declines and the job vacancy rate reached a record high of 7.3%, up 1.3 percentage points from February.

There was an average of 1.2 unemployed people for each job vacancy in March, down from 1.4 in February and from 2.6 one year earlier (not seasonally adjusted). This decline coincides with a number of Labour Force Survey indicators which pointed to an increasingly tight labour market in March, including a record-low unemployment rate of 5.3% and a record-high core-age (aged 25 to 54 years) labour force participation rate of 88.6% (data from the Labour Force Survey are seasonally adjusted).

The unemployment-to-job vacancy ratios varied across Canada, with the lowest ratios in Quebec (0.8) and British Columbia (0.8), and the highest in Newfoundland and Labrador (4.3). A lower ratio indicates a tighter labour market and possible labour shortages.

New data shed light on recent challenges experienced by employers facing labour shortages
Before increasing to over one million (1,012,900) in March 2022, job vacancies had fallen for five consecutive months from a previous high of 988,300 in September 2021. Labour demand varies over the course of the year influenced by seasonal patterns with increased economic activity typically driving higher demand for labour in the spring and summer and lower demand in the winter. These seasonal effects are reflected in the five months of consecutive decreases in job vacancies from October 2021 to February 2022.

To shed light on recent trends in job vacancies and account for seasonality, Statistics Canada has developed new experimental data with the goal to remove the effect of seasonal patterns. Based on these data, total job vacancies increased from September to December 2021, consistent with a number of economic and labour market indicators which suggested that employers continued to face significant challenges filling vacant positions in the late fall and early winter 2021.

Using these same experimental data, vacancies decreased in January and February 2022, coinciding with tighter public health restrictions, before resuming their increase in March. 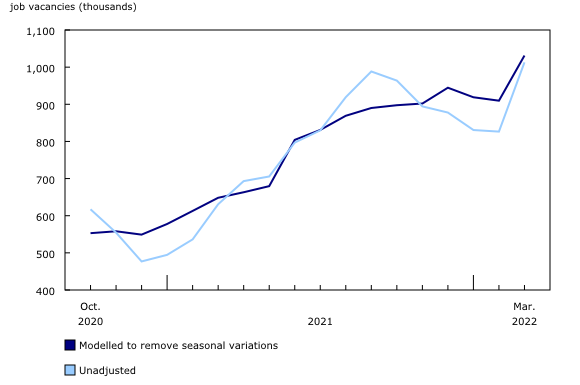 Unless otherwise specified, average weekly hours data are for hourly and salaried employees only and exclude businesses that could not be classified to a NAICS code.

Next release
Data on payroll employment, earnings and hours, and job vacancies for April 2022 will be released on June 24, 2022.