Canada's number of business openings down 4.7% in October, while closures fell 5.7%; number of active businesses edged down 0.4%, but remained above February 2020 levels for the sixth consecutive month: Statistics Canada

There is considerable variation across sectors when comparing April 2021 exit rates to their historical averages. The largest difference was in the arts, entertainment, and recreation sector, which had an exit rate of 2.6% in April 2021 compared with its historical average of 1.5%. Other sectors with a large difference between the April 2021 rate and the historical rate were transportation and warehousing (2.2% vs. 1.6%), real estate and rental and leasing (2.6% vs. 2.0%) and professional, scientific and technical services (2.2% vs. 1.7%).

Chart 1: Change in the number of active businesses in the business sector, January 2019 to October 2021, seasonally adjusted series 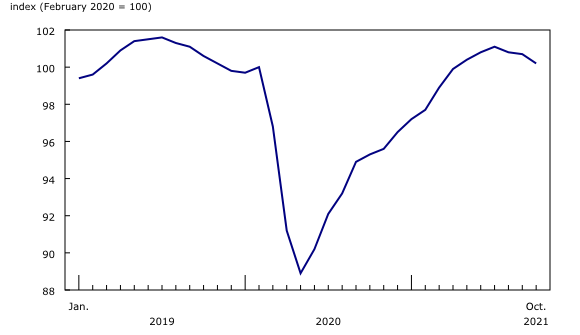 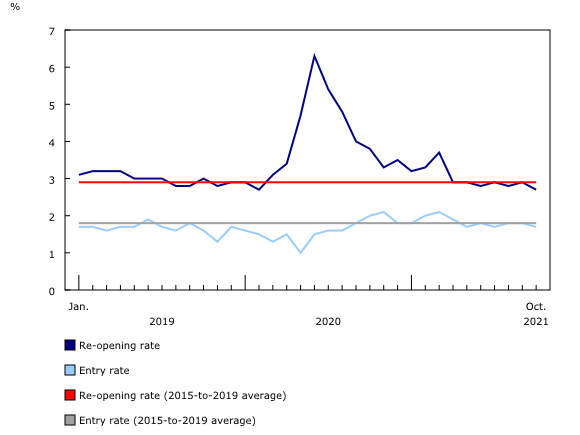 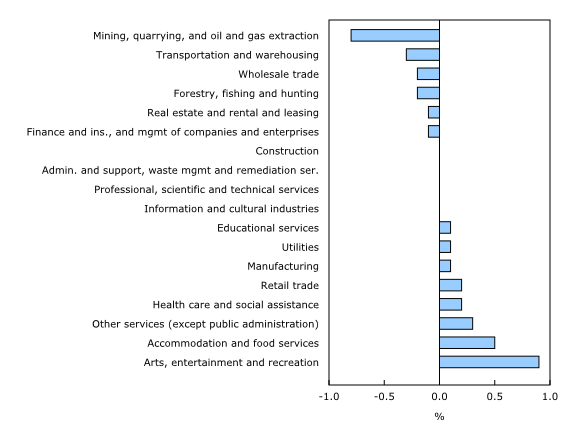 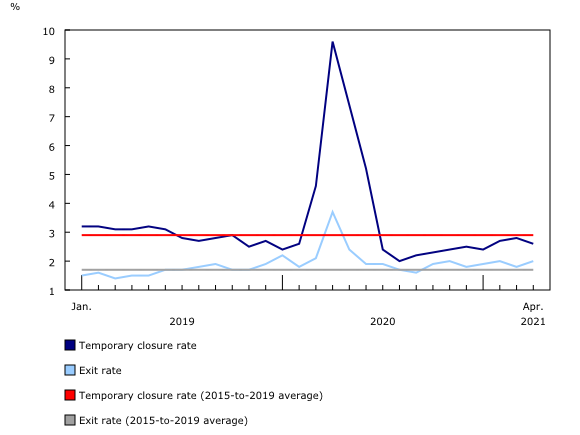 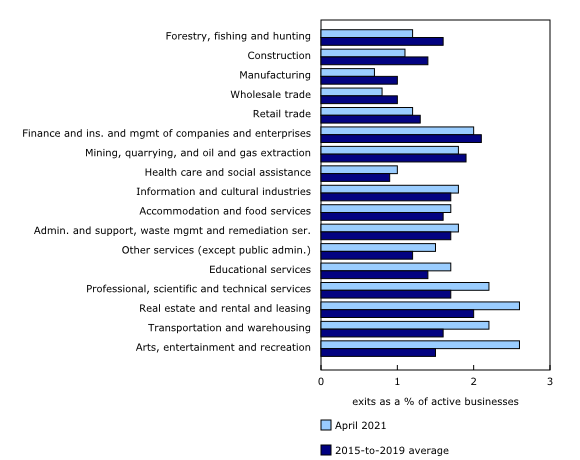 Note to readers
Every new month of data leads to a revision of the previously released data due to such factors as the seasonal adjustment process and a new version of the Generic Survey Universe File (or vintage of the Business Register). As such, the estimates may vary compared with a previous release.

The definition of exits is based on the Longitudinal Employment Analysis Program (LEAP) annual exits. Because the LEAP definition can require up to 24 months of data to be counted as an exit, projections of exits using predicted growth rates are implemented using a regression model of exits on closures of more than six months. As a result, there are no published exits in the last six months. A temporary business closure is the difference between closures and exits.

A business is defined as an enterprise operating in a particular geography and industry.

The vast majority of businesses operate in one industry and one location or geography. For these businesses, in the monthly estimates of openings and closures, they will be counted once at the national/provincial level. For example, a retailer in Windsor, Ontario, will be counted as an active business in the Ontario estimates and once in the national estimates.

Some businesses can have multiple operations, and these can be in different industries and geographies. For such businesses, in the monthly estimates of openings and closures, they can be counted more than once because they are active in multiple industries or geographies. For example, if a retailer has operations in both Alberta and Ontario, it will be counted as an active business in both provinces, but only once at the national level because it represents only one active firm. Similarly, a firm with retail and wholesale operations will be counted in both industries when individual industries are examined. However, when the business sector is examined, the firm counts only once because at that level it represents one firm active in the business sector.