Canada's net foreign asset position, the difference between Canada's international financial assets and international liabilities, was down by $230.2 billion to $875.1 billion at the end of the second quarter. This was a second significant consecutive quarterly decline. Both international assets and liabilities decreased substantially in the quarter as global equity markets fell sharply. In the first half of 2022, Canada's net foreign asset position fell by $627.6 billion, from the record high reached at the end of 2021.

The revaluation effect resulting from market price changes (-$255.5 billion) contributed the most to the decrease in Canada's net foreign asset position. Over the quarter, the Canadian stock market contracted by 12.2%, the US stock market lost 14.1%, and the European stock market was down 9.9%. This resulted in substantial declines in the value of both Canada's international assets and liabilities in the form of equity instruments, with assets being more impacted as equities account for a much higher share of assets than liabilities. 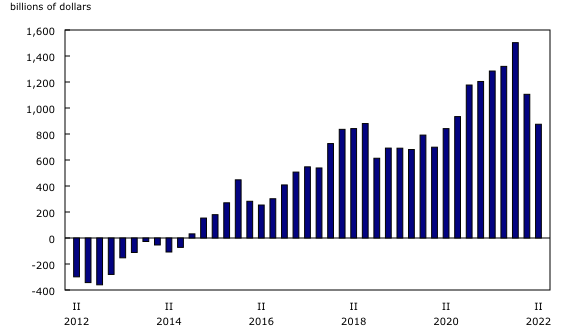 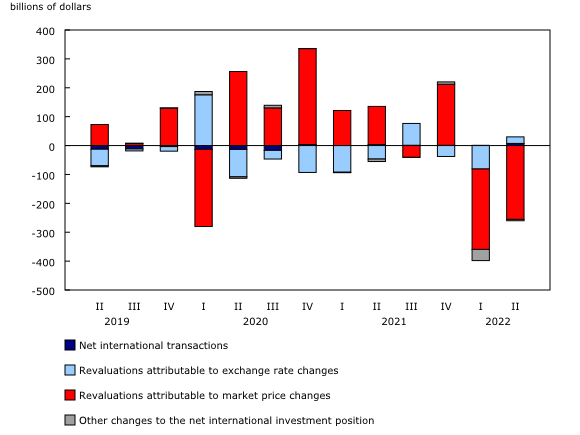 Canada's international assets and liabilities decrease on lower equity prices
Canada's international assets were down by $551.3 billion (-7.5%) to $6,817.9 billion at the end of the second quarter, the largest percentage decrease since the third quarter of 2008, at the time of a global financial crisis. The decrease was largely attributable to the decline in foreign stock prices, especially in the US market. New investments abroad (+$84.9 billion), mainly in the form of direct investment and, to a lesser degree, the revaluation due to exchange rate movements (+$59.6 billion), moderated the decrease.

On the other side of the ledger, Canada's international liabilities were down by $321.1 billion (-5.1%) to $5,942.8 billion at the end of the second quarter, the largest percentage decrease since the first quarter of 2020. The decrease mainly resulted from lower Canadian equity prices. This decline was moderated by inflows of funds from abroad (+$77.5 billion) and, to a lesser extent, upward revaluation effect of the weaker Canadian dollar (+$37.0 billion). 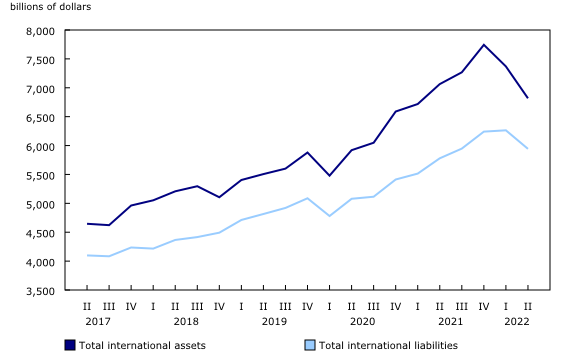 The government sector's gross external debt decreased by $46.7 billion to $601.3 billion. A decline in foreign holdings of debt securities in the form of bonds (-$28.2 billion) and money market instruments (-$18.4 billion) contributed to the contraction. While the decline in money market instruments was mainly attributable to retirements, the decrease in bonds was mostly due to the valuation changes resulting from higher interest rates. 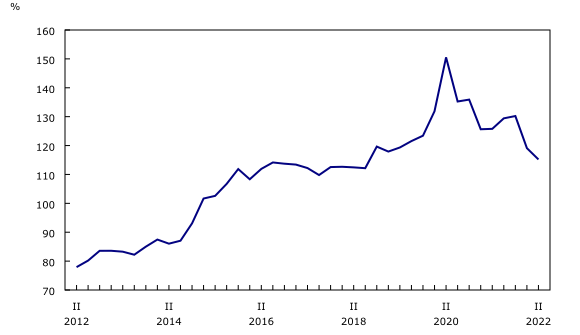 Next release
International investment position data for the third quarter of 2022 will be released on December 9, 2022.

The Canada and the World Statistics Hub (Catalogue number13-609-X) is available online. This product illustrates the nature and extent of Canada's economic and financial relationship with the world through interactive graphs and tables. This product provides easy access to information on trade, investment, employment and travel between Canada and a number of countries, including the United States, the United Kingdom, Mexico, China, and Japan.