Canada's net foreign asset position reached C$1.7T in Q4, an increase of C$297B from Q3; growth due to strength of global equity markets, to which Canada's international assets are highly exposed: Statistics Canada

The revaluation effect resulting from market price changes (+$323.3 billion) led the overall increase in Canada's net foreign asset position in the fourth quarter. Major foreign stock markets had solid performances in the quarter, with the US and European stock markets growing by 10.6% and 6.2% respectively. Meanwhile, the Canadian stock market grew by 5.7%. At the end of the fourth quarter, 73.5% of Canada's international assets and 44.8% of its liabilities were in the form of equities. 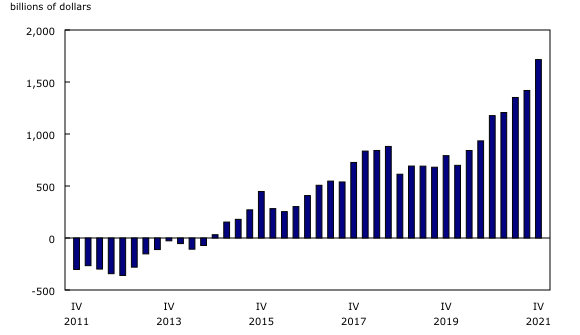 The revaluation effect resulting from fluctuations in exchange rates (-$47.7 billion) moderated the overall increase in Canada's net foreign asset position. Over the fourth quarter, the Canadian dollar gained 0.5% against the US dollar, 2.9% against the euro and 3.5% against the Japanese yen. At the end of the quarter, 96.9% of Canada's international assets were denominated in foreign currencies, compared with 36.9% of its international liabilities.

On a geographical basis, Canada's net foreign asset position with the United States was up by $205.1 billion to $1,089.3 billion at the end of the fourth quarter, and up by $91.9 billion to $626.2 billion compared with the rest of the world. 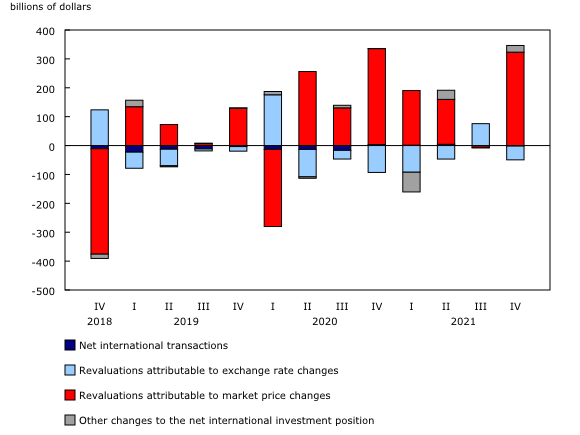 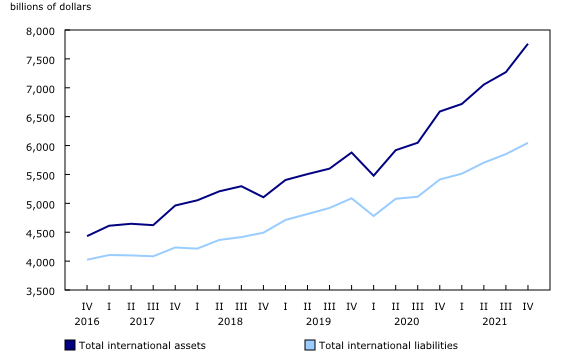 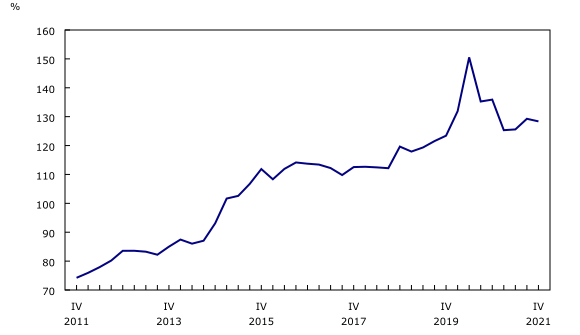 Special Purpose Entities
In an inter-connected world of complex multinational enterprises, Special Purpose Entities (SPEs) are recognized for hosting funds in transit. SPEs are broadly defined as foreign controlled legal entities with little employment or physical presence in the host economy. They are established for the benefits of the host jurisdiction, such as access to capital markets, financial services and/or for risk management, regulatory or tax burden reduction advantages. Since these entities are not necessarily located in the ultimate host economy, they tend to skew the statistics on foreign investment. For this reason, data users have recognized the need to distinguish their cross-border transactions and positions. To this effect, the International Monetary Fund developed a new database on SPEs, and Canada participated in this initiative by providing preliminary estimates on the contribution of these entities to its foreign direct investment positions. At the end of 2020, firms identified as SPEs in Canada held 1.8% of the total stock of direct investment abroad. Meanwhile, SPEs were the recipient of a slightly lower share of foreign direct investment in Canada, accounting for 1.3% of the total position.

Next release
International investment position data for the first quarter of 2022 will be released on June 10, 2022.

The Canada and the World Statistics Hub (Catalogue number13-609-X) is available online. This product illustrates the nature and extent of Canada's economic and financial relationship with the world through interactive graphs and tables. This product provides easy access to information on trade, investment, employment and travel between Canada and a number of countries, including the United States, the United Kingdom, Mexico, China and Japan.