The revaluation effect resulting from market price changes (-$248.1 billion) contributed the most to the decrease in Canada's net foreign asset position. Global stock markets moved in different directions in the first quarter. While the Canadian stock market grew by 3.1%, the US and European stock markets fell by 4.9% and 9.2%, respectively. Canada's international investment position is strongly exposed to the performance of stock markets. At the end of the first quarter, 72.5% of Canada's international assets and 48.2% of its liabilities were held in the form of equities.

The decline in the net foreign asset position was the first one since the first quarter of 2020 when global equity markets fell sharply at the onset of the COVID-19 pandemic. 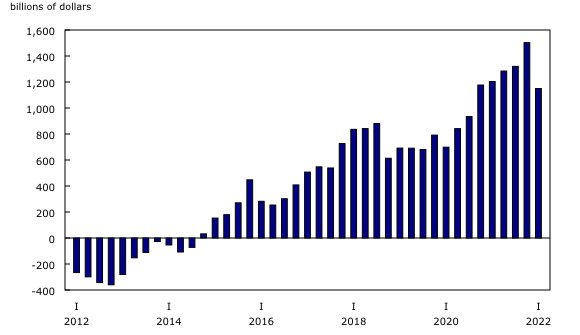 The revaluation effect resulting from fluctuations in exchange rates (-$74.3 billion) further decreased Canada's net foreign asset position. Over the first quarter, the Canadian dollar gained 1.5% against the US dollar, 3.9% against the euro, and 6.9% against the Japanese yen. At the end of the quarter, 96.8% of Canada's international assets were denominated in foreign currencies, compared with 34.9% of its international liabilities. 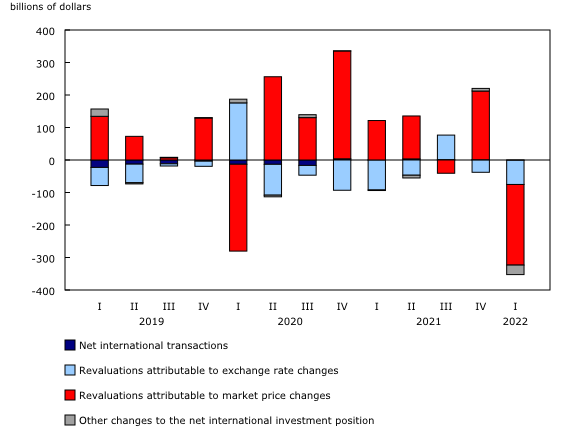 On the other side of the ledger, Canada's international liabilities were down by $40.5 billion to $6,200.6 billion. Financial transactions (-$45.4 billion) such as the withdrawal of currency and deposits in Canada by non-residents as well as the downward revaluation coming from the fluctuations of the Canadian dollar against foreign currencies (-$36.3 billion) contributed to the overall reduction. Revaluations due to market price changes (+$30.8 billion), led by higher Canadian equity prices, moderated the decline. At the end of the quarter, financial corporations' international liabilities represented 44.7% of Canada's total international liabilities, compared with 40.3% for non-financial corporations.

The financial sector was by far the largest contributor to Canada's net asset position to the rest of the world at the end of the first quarter, their international assets exceeding their international liabilities by $2,425.7 billion. On the other hand, non-financial corporations and the government sector both posted a net foreign liability position. 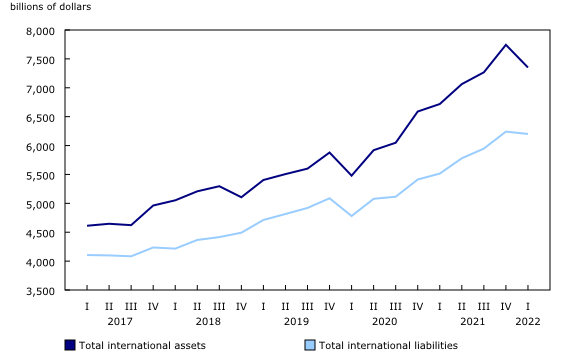 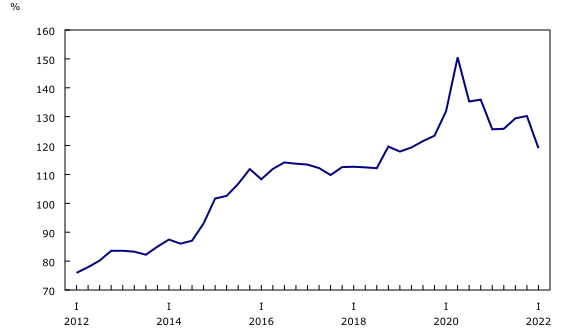 Next release
International investment position data for the second quarter of 2022 will be released on September 9, 2022.

The Canada and the World Statistics Hub (Catalogue number13-609-X) is available online. This product illustrates the nature and extent of Canada's economic and financial relationship with the world through interactive graphs and tables. This product provides easy access to information on trade, investment, employment and travel between Canada and a number of countries, including the United States, the United Kingdom, Mexico, China, and Japan.