Canada's manufacturing sales up 1.7% to C$72.3B in April led by petroleum and coal, motor vehicle and primary metal; total inventories up 2.3% to C$111.8B on higher inventories of machinery, chemical and miscellaneous manufacturing: Statistics Canada 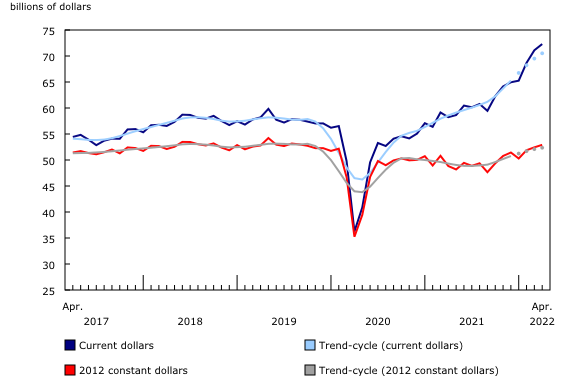 Sales in constant dollars rose 0.9% in April, indicating that both prices and volume sold contributed to the gains in April. The Industrial Product Price Index rose 0.8% in April.

Petroleum sales continue to increase
Sales of petroleum and coal products marked a new record high, rising 3.7% to $10.1 billion in April, the fourth consecutive monthly gain. Higher prices were mainly responsible for the increase as real value sales increased 0.5%. The global disruptions of energy supply caused by the Russian invasion of Ukraine were responsible for the surge in prices of refined petroleum energy products (including liquid fuels), which increased 4.7% in April. Exports of refined petroleum energy products were up 14.4% in April.

Following an 8.6% increase in March, primary metal sales rose 4.1% to $6.2 billion in April, on higher prices and volumes sold. The limited metal production in China due to the COVID-19 pandemic and global supply interruptions due to the Russia aggression against Ukraine led to an increase in prices of basic and semi-finished iron or steel products (+3.2%). Monthly sales in constant dollars rose 2.9% in April, while year over year, sales were up 26.0%.

Higher production of aerospace product and parts (+11.2%) and higher sales of food (+1.2%) and machinery (+3.0%) also contributed to the gains in the manufacturing sector in April.

Following seven consecutive monthly increases, wood product sales declined 6.0% to $4.5 billion in April, primarily on lower prices. Prices for softwood lumber were down 13.7%, while exports of lumber and other sawmill products decreased 2.6% in April. Wood product sales in constant dollars were down 1.3%.

Sales also declined in the non-metallic mineral product (-3.8%), beverage and tobacco product (-3.4%) and other transportation equipment (-16.0%) industries in April.

Sales in Alberta increase the most, mainly on higher petroleum sales
Manufacturing sales increased in six provinces in April, led by Alberta and Quebec. British Columbia posted the largest decline.

In Quebec, sales increased 2.1% to $18.0 billion in April, the fourth consecutive month-over-month gain. The increase was mainly attributable to sales of primary metals (+8.2%) and production of aerospace product and parts (+27.6%). With the increase in April, total manufacturing sales in Quebec were up 20.0% year over year.

In British Columbia, following seven consecutive monthly increases, sales declined 2.9% to $5.8 billion in April, mainly on lower sales in the paper and wood product industries. Despite the decrease in April, total sales in British Columbia stood 7.3% higher compared with the same month a year earlier.

Sales in Québec fell 8.0% to $2.0 billion in April, following a 16.9% increase in March. Lower sales of petroleum and coal products were almost entirely responsible for the decline. Despite the decrease, total sales in Québec were up 58.8% year over year in April. 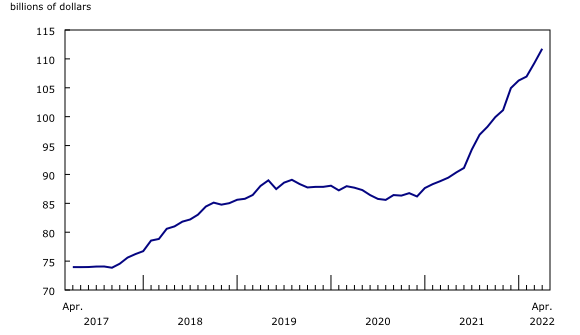 The inventory-to-sales ratio increased from 1.54 in March to 1.55 in April. This ratio measures the time, in months, that would be required to exhaust inventories if sales were to remain at their current level. 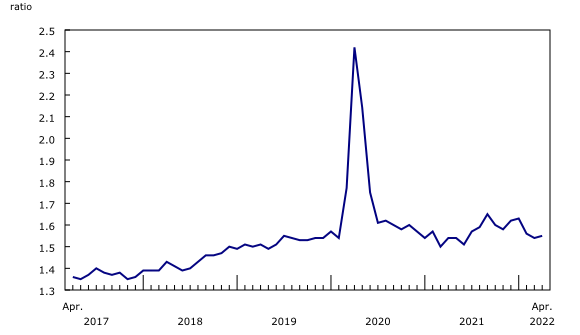 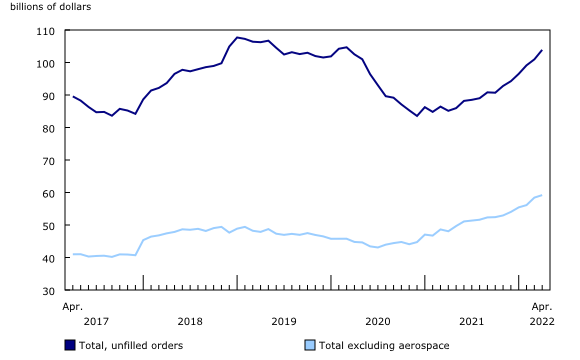 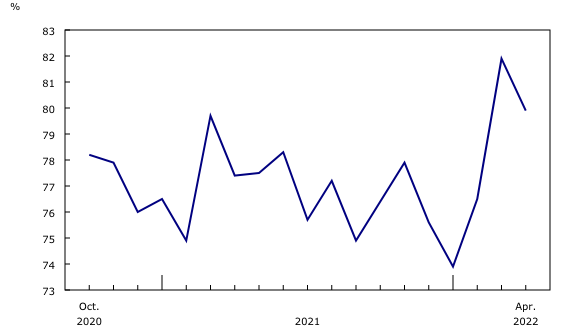 Note to readers
Monthly data in this release are seasonally adjusted and are expressed in current dollars, unless otherwise specified.

Both seasonally adjusted data and trend-cycle estimates are subject to revision as additional observations become available. These revisions could be large and could even lead to a reversal of movement, especially for reference months near the end of the series or during periods of economic disruption.

Unfilled orders are a stock of orders that will contribute to future sales, assuming that the orders are not cancelled.

Manufacturers reporting sales, inventories and unfilled orders in US dollars

Some Canadian manufacturers report sales, inventories and unfilled orders in US dollars. These data are then converted to Canadian dollars as part of the data production cycle.

For sales, based on the assumption that they occur throughout the month, the average monthly exchange rate for the reference month established by the Bank of Canada is used for the conversion. The monthly average exchange rate is available in table 33-10-0163-01. Inventories and unfilled orders are reported at the end of the reference period. For most respondents, the daily average exchange rate on the last working day of the month is used for the conversion of these variables.

Each month, the Monthly Survey of Manufacturing releases preliminary data for the reference month and revised data for the previous three months. Revisions are made to reflect new information provided by respondents and updates to administrative data.

Once a year, a revision project is undertaken to revise multiple years of data.

Data from the Monthly Survey of Manufacturing for May will be released on July 14, 2022.