Canada's current account balance (on a seasonally adjusted basis) recorded a $0.8 billion deficit in the fourth quarter of 2021 after posting a $0.8 billion surplus in the previous quarter. The slight deficit position mainly reflected a deterioration of the investment income balance which posted its first deficit in over two years.

In the financial account (unadjusted for seasonal variation), record foreign investment in Canadian securities was the main contributor to the inflow of funds in the economy. This activity was moderated by strong Canadian acquisitions of foreign securities in the fourth quarter. 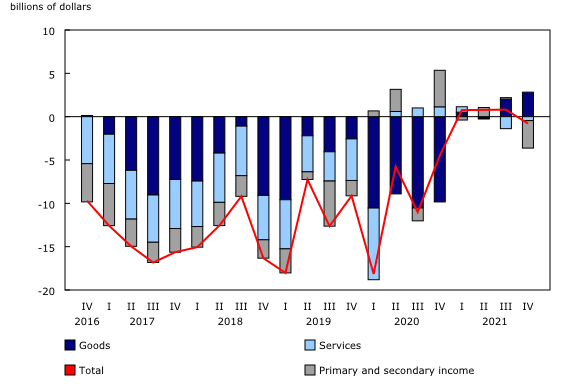 Exports of goods were up by $10.2 billion to $170.7 billion in the fourth quarter. The largest contributor was energy products (+$5.1 billion), mostly through higher prices. Other major contributors were motor vehicles and parts (+$2.6 billion) due to higher volumes—and consumer goods (+$1.5 billion) led by pharmaceutical and medical products.

Meanwhile, imports of goods rose by $9.3 billion to $167.9 billion. Consumer goods increased by $3.0 billion, largely on higher imports of pharmaceutical and medicinal products. The increase in exports and imports of pharmaceutical and medicinal products reflected large shipments that came into Canada for packaging and labelling and were, for the most part, subsequently exported during the fourth quarter. Motor vehicles and parts were up $2.8 billion on stronger volumes.

On a geographical basis, the goods surplus with the United States was up by $2.3 billion in the fourth quarter with exports increasing by more than imports. The deficit with countries other than the United States increased by $1.5 billion. The trade deficit with China rose by $1.5 billion as imports reached a record-high $15.3 billion in the quarter. 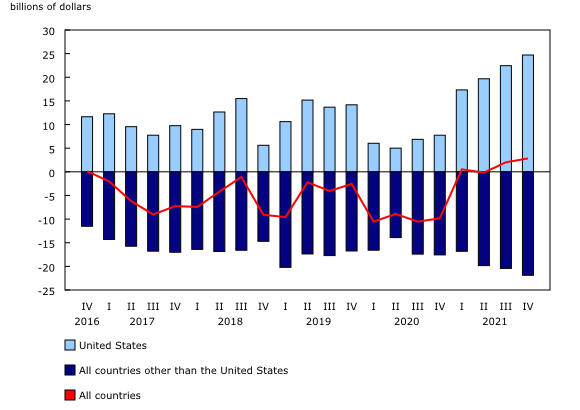 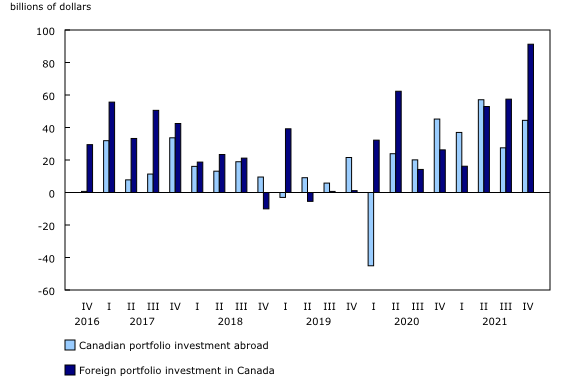 Foreign direct investment in Canada amounted to $19.4 billion in the fourth quarter, a level surpassed only twice since 2016. While cross-border mergers and acquisitions were relatively strong at $8.8 billion, earnings reinvested in Canadian affiliates by their foreign parents accounted for most of the activity. 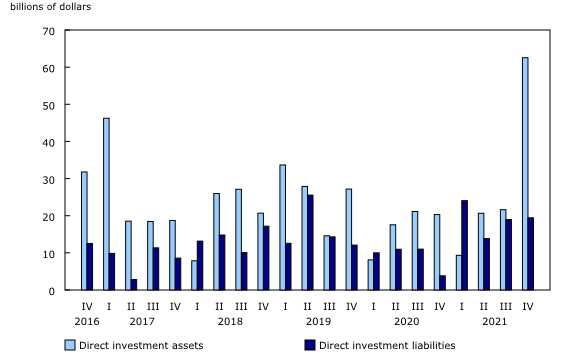 Year 2021 in review
First current account surplus since 2008
For the year 2021, the current account balance recorded a surplus of $1.6 billion, the first surplus since 2008. The trade in goods balance went from a $39.8 billion deficit in 2020 to a $5.2 billion surplus in 2021. Total exports rose by $113.6 billion, led by higher exports of energy products on the strength of prices. Meanwhile, imports increased by $68.6 billion, with gains widespread across product sections. For more information about the annual trade in goods, consult "Canadian international merchandise trade, December 2021."

The trade in services deficit narrowed to a low level of $1.3 billion in 2021 as the travel surplus increased. Travel restrictions continued to have a significant impact on travel services during the year, resulting in an unusual surplus position for a second consecutive year.

The investment income balance posted a $5.9 billion surplus in 2021, down by $8.6 billion compared with the previous year. Following significant declines in 2020, profits earned in Canada by foreign direct investors rose $26.1 billion, while those earned by Canadians on their direct investments abroad were up by $19.2 billion in 2021.

Foreign investors acquired a record-high $217.8 billion in Canadian securities in 2021. Foreign purchases in the form of debt securities issued by the federal government remained strong, as borrowing needs to support Canadian enterprises and households impacted by the COVID-19 pandemic were still present. On the other side of the ledger, Canadian investors acquired an unprecedented $165.9 billion of foreign securities, significantly higher than the previous record of $84.7 billion observed in 2017.

Note to readers
Definitions
The balance of international payments covers all economic transactions between Canadian residents and non-residents in three accounts: the current account, the capital account and the financial account.

The financial account covers transactions in financial assets and liabilities.

For more information on the balance of payments, consult "Chapter 8. International Accounts," in the User Guide: Canadian System of Macroeconomic Accounts, available on our website. The chapter also presents the most recent balance of payments statistics.

Next release
Balance of international payments data for the first quarter of 2022 will be released on May 30, 2022.

Products
The product Canada's international trade and investment country fact sheet (Catalogue number71-607-X) is available online. This product provides easy and centralized access to Canada's international trade and investment statistics, on a country by country basis. It contains annual information for nearly 250 trading partners in summary form, including charts, tables and a short analysis that can also be exported in PDF format.

The product Canada and the World Statistics Hub (Catalogue number13-609-X) is available online. This product illustrates the nature and extent of Canada's economic and financial relationship with the world using interactive graphs and tables. This product provides easy access to information on trade, investment, employment and travel between Canada and a number of countries, including the United States, the United Kingdom, Mexico, China and Japan.

The Economic accounts statistics and International trade statistics portals are available from the Subjects module of the Statistics Canada website.

The product Methodology for Exports of Energy Products within the International Merchandise Trade Program, which is part of Latest Developments in the Canadian Economic Accounts (Catalogue number13-605-X), is available.