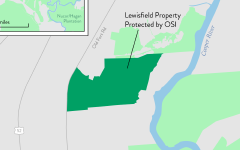 Over the past three decades, conservation groups and landowners have permanently secured more than 50,000 acres in Berkeley County, including the sites of some of America’s earliest European and African American settlements. The newly established Lewisfield Preserve represents a vital addition to the protected landscape along the Cooper River – near the northern edge of the Charleston metropolitan area.

The acquisition and creation of the Lewisfield Preserve comes at a critical moment. Over the past decade, Berkeley County has consistently ranked as the second fastest-growing county in South Carolina, placing it among the most rapidly growing places in the U.S. As thousands of acres of land are converted to subdivisions, strip malls, and industrial sites every year, the future of nature and history in Berkeley County truly hangs in the balance – a balance that the Open Space Institute, Lord Berkeley Conservation Trust, and Lowcountry Land Trust have substantially tilted toward preservation.

Conservationists and their partners have permanently safeguarded dozens of properties along the Cooper River in the last 30 years, forming a nearly unbroken 30-mile protected corridor on both sides of the river that extends up the historic East Branch. A few of the protected sites include: Medway Plantation, a 7,000-acre property featuring the oldest masonry house in the state; Mulberry Plantation, with one of the finest examples of Jacobean architecture in the New World; and 3,000-acre Mepkin Abbey, formerly the home of Henry and Clair Booth Luce and now a beloved Cistercian monastery.

Combined with the 250,000-acre Francis Marion National Forest, these publicly and privately owned conservation lands constitute one of the largest sanctuaries of history and nature on the Eastern Seaboard. The Lewisfield Preserve represents the latest – and one of the final – pieces of the conservation puzzle along this section of the Cooper River.

The Preserve encompasses a feature of Colonial agriculture that is virtually unknown today – inland, non-tidal rice fields. Unlike their better-known successors of rice production – tidal rice fields along the river edges, which powered the state’s economy through the late 18th and 19th centuries – rice cultivation in inland fields lasted just a few decades. By 1750, most of these fields had been abandoned and were reverting to bottomland forests of red and white oak, hickory, black gum, tupelo and bald cypress trees.

The Preserve presents an exceptional opportunity to highlight this forgotten era. The creation of South Carolina’s rice industry by enslaved Africans has been compared to the building of the pyramids. But the labor and expertise involved with erecting the 130 or so pyramids of Egypt pales in comparison to the logging, stump removal, and leveling of hundreds of thousands of acres of ancient hardwood forests; the construction of hundreds of miles of earthen dikes using shovels, buckets, and wheelbarrows; the installation of thousands of sluice gates; and the annual hand-planting, tending and harvesting of tens of millions of pounds of rice. South Carolina’s “rice kingdom” created and operated by enslaved Africans represents an endeavor that has few parallels in human history.

The Lewisfield Preserve is also a biological gem. With its towering forests and diverse wetlands, the property has been one of the region’s highest priority conservation targets. Providing breeding and roosting grounds – as well as a migratory stopover – for countless neotropical songbirds, the threatened wood stork, and the endangered northern long-eared bat, the Preserve harbors a variety of habitats that support native plants and animals. Hundreds of species of vascular plants are found there too.

In addition, the property was once the site of an important skirmish in the Revolutionary War. The Battle of Lewisfield displayed a type of warfare that seems quaint and distant today, embodying principles and codes of conduct of a bygone era.

As thousands of acres of land are converted to subdivisions, strip malls, and industrial sites every year, the future of nature and history in Berkeley County truly hangs in the balance.

On July 16, 1781, Colonel Wade Hampton and his men made their way across what is now Lewisfield Preserve for breakfast, and “a sight, if possible, of Miss Molsie Simons.” As they approached the Cooper River, they surprised a group of 78 British soldiers loading two ships at the wharf. Hampton’s men promptly captured the British soldiers and burned the ships, concluding what must have been one of the most successful and least violent conflicts of the war.

The property was first protected by OSI in 2018 to mitigate unavoidable impacts associated with the South Carolina Department of Transportation Berlin Myers Parkway project in Dorchester County. After stewarding the property over the past three years, OSI placed it under a conservation easement with the Lowcountry Land Trust and transferred the land to the Lord Berkeley Conservation Trust.

“Lowcountry Land Trust is proud to partner with OSI, Lord Berkeley Conservation Trust and SCDOT on the permanent protection of Lewisfield,” said Ashley Demosthenes, President and CEO of Lowcountry Land Trust. “Each organization is bringing its unique strengths to the table to protect this extraordinary property.”

“The protection of the Lewisfield Preserve has been a long-standing priority of the Lord Berkeley Conservation Trust (LBCT) for decades. This effort was successful only because of partnership with OSI, LLT, SCDOT, and the former owners of the property, the Dennis family,” said Chris Vaughn, LBCT Director.

A national conservation leader, the Open Space Institute protects land for clean water, improved public recreational access, a healthier planet, stronger communities, and wildlife habitat. For the past decade, OSI has protected more than 100,000 acres in the Southeastern U.S., including more than 35,000 acres in South Carolina. Since 1974, the OSI has partnered in the protection of 2.3 million acres across the eastern U.S. and southern Canada.