Before diving into the top 10 most-trusted brands, let’s take a look at just how ready consumers are to embrace the technology. While automakers, legacy and startups, and even a few technology companies promise appealing, cutting-edge fully-autonomous vehicles… if the consumer isn’t entirely on board then the pace of adoption may stall the arrival of this technology.

While it appears most consumers, regardless of age bracket, are more comfortable waiting a bit longer for fully-autonomous vehicles, that doesn’t mean that automakers and technology companies should delay getting the ball rolling.

At this time, there are no fully-autonomous or “self-driving” vehicles on sale today. However, some automakers including GM, Ford, Tesla, and Toyota do currently offer more comprehensive ADAS suites that do legally allow for Level 2 semi-autonomous hands-free driving on marked highways in ideal, safe conditions (as required by the National Highway Transportation Safety Administration or NHTSA, a driver’s eyes and attention must be kept on the road when these hands-free systems are activated and in use). 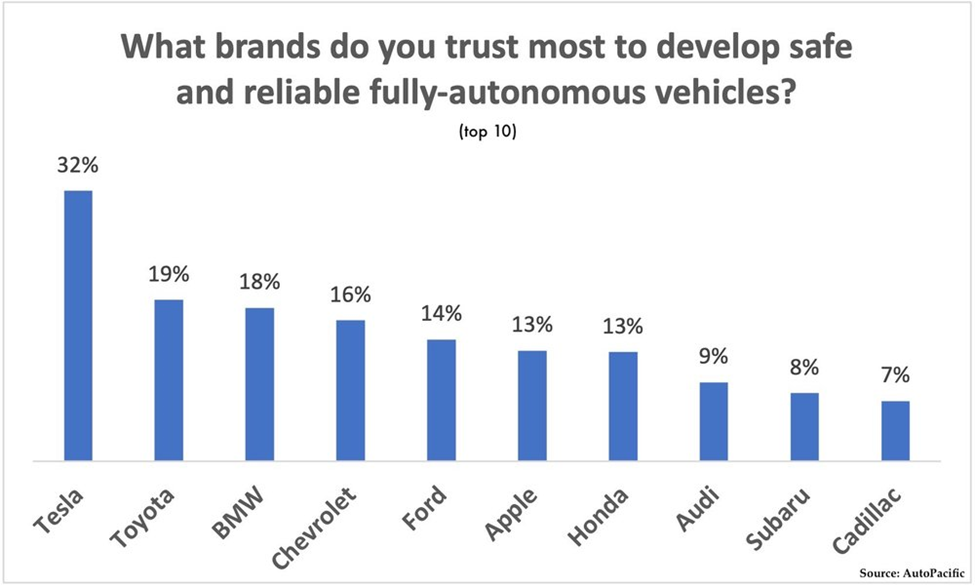 With 32% of consumers, Tesla claims the crown for being the most trusted brand for developing safe and reliable fully-autonomous vehicles. This likely can be credited to much more “buzz” surrounding the automaker’s pricey and controversial Full-Self Driving driver assistance tech in which current Tesla owners are able to sign up as volunteers and help demo the Level 2 semi-autonomous hands-free capability for Tesla’s own R&D efforts. Second place is Toyota, with 19% of consumers picking the brand as their most trusted; the brand in early March started rolling out its first Level 2 semi-autonomous hands-free driving aid for the hydrogen-powered Mirai’s 2022 model year. Perhaps not surprisingly, the younger the consumer, the more who trust Tesla while the older the consumer, the higher the trust swings for Toyota.

18% of consumers picked BMW, 16% Chevrolet, and 14% picked Ford - with the latter two automakers currently offering Level 2 semi-autonomous hands-free highway assists on various models in their respective lineups. However, in a similar case with Tesla, younger consumers are substantially more likely to trust BMW (42% of consumers ages 18 to 39) compared to those who trust in Chevrolet and Ford (just 25% and 16%) respectively.

Interestingly, despite not having a vehicle of its own on sale (yet), 13% of consumers trust Apple to develop safe and reliable fully-autonomous vehicles.  While it didn’t earn a spot in the top ten list above, 5% of consumers did pick Sony as a most-trusted brand.

Honda, Audi, Subaru, and Cadillac make up the remaining four of the top ten most trusted automakers to develop safe and reliable fully-autonomous vehicles. Cadillac is the only automaker in this group four to currently offer a Level 2 semi-autonomous hands-free highway driving aid, Super Cruise, which is available on select CT6, CT4, CT5, Escalade, and XT6 models, as well as soon the all-electric LYRIQ crossover due for our 2023 model year.