Shiseido Company, Limited (“Shiseido”) has developed “Shape-Shifting HA Technology” that controls the volume of hyaluronic acid (HA). HA forms a water retention film on the skin surface and exerts a high moisturizing effect, but at the same time, its very large molecular size hinders penetration into the stratum corneum after application. With the new technology, HA shrinks via the addition of magnesium ions (Mg ions) and dramatically increases its penetration into the stratum corneum compared to normal HA. In addition, this technology re-expands the shrunken HA (“Compact HA”) via the addition of sodium metaphosphate, a type of chelating agent(*1), resulting in restoration of the original properties of HA and increasing the water content in the stratum corneum. Some of these research results were presented at the 142nd Annual Meeting of the Pharmaceutical Society of Japan on March 26, 2022.
We at Shiseido have been conducting this research under the Inside/Outside approach of our R＆D philosophy “DYNAMIC HARMONY”. We aim to realize soft and dewy skin through the application of the Shape-Shifting HA Technology, the most advanced technology that controls the volume of high molecular HA to enhance its penetration and function in the stratum corneum.
*1 A chemical component that counteracts the properties of metal ions by capturing the metal ions in the surroundings.

HA is a biopolymer with excellent water retention capacity and known to indicate various biological activities other than moisturizing the skin. Since the amount of HA in the epidermis decreases with age, it is important to deliver HA to the inner skin in order to maintain healthy skin. However, given that HA is large in molecular weight and the stratum corneum acts as a strong barrier, it was extremely difficult to make HA penetrate the skin. In addition, HA injections in cosmetic medicine, which deliver HA into the subcutaneous tissue directly as an invasive procedure, still pose the challenge of not applicable to the entire face. Therefore, we have developed a new technology that allows high molecular weight HA to penetrate into the skin in a non-invasive way and enables the penetrated HA to perform its original functions.

We added various salts to aqueous HA solutions and measured their penetration amount into the stratum corneum. The results showed that the addition of magnesium chloride (MgCl2) increased the amount of HA penetrated into the stratum corneum (Figure 2). Next, after having applied the HA labeled with green fluorescence onto the skin surface and observed cross sections with a fluorescence microscope, we successfully visualized that more HA had reached the deeper layer of stratum corneum via the addition of MgCl2, compared to a HA solution without MgCl2 (Figure 3). Furthermore, we added MgCl2 to an aqueous HA solution and measured the HA volume, and it was confirmed that there was a decrease in HA volume (Figure 4), which suggests that MgCl2 shrinks the HA volume and enhances the HA penetration in the stratum corneum. 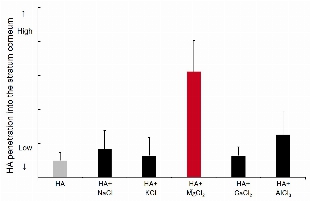 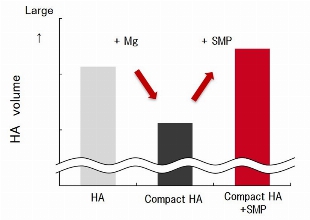 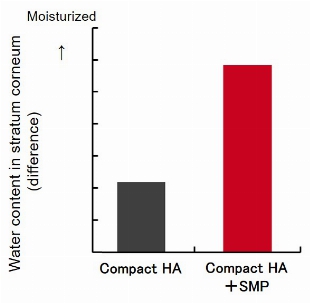 We at Shiseido have further deepened our research on HA, a skin moisturizing component, and succeeded in developing an innovative technology that controls its volume, enhances its penetration into the stratum corneum, and its functionality. We will continue to utilize this technology to address a wide range of skin concerns as our key technology for future beauty care solutions in suit with our corporate mission, “BEAUTY INNOVATIONS FOR A BETTER WORLD”.