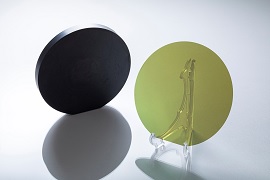 SDK has been considering in-house production of SiC wafers, which are used as main material for SiC epitaxial wafers, aiming to improve quality of our SiC epitaxial wafers and establish a stable supply system for them. From 2010 to 2015, SDK took part in “Novel Semiconductor Power Electronics Project Realizing Low Carbon Emission Society *2,” which was hosted and entrusted by the Ministry of Economy, Trade and Industry and New Energy and Industrial Technology Development Organization (NEDO), as a member of the “Research and Development Partnership for Future Power Electronics Technology*3.” Furthermore, in 2018, SDK took over SiC-wafer related assets of Nippon Steel & Sumitomo Metal Group (current Nippon Steel Group)*4, and has been developing technologies for mass production of SiC wafers since then.

The Showa Denko Group aims to be a “Co-Creative Chemical Company” and contribute to the sustainable development of global society. Under this vision, SDK positions its operation to produce SiC epitaxial wafers, which contributes to efficient use of energy, as a next-generation business, and will allocate much of our business resources. The Group will continue contributing to the spread of SiC power semiconductors by maintaining “Best in Class” as its motto and continuing provision of high-performance and highly-reliable products.

*1“SiC epitaxial wafer” is a material for semiconductor, made from SiC wafer by depositing thin layer of epitaxial SiC on the surface of the wafer.
*2“Novel Semiconductor Power Electronics Project Realizing Low Carbon Emission Society ” is a project aiming to establish technology for realization of stable supply of SiC wafers with large diameters. In 2010, this project was stared and entrusted by the Ministry of Economy, Trade and Industry, and, in 2011, the control of this project was transferred to New Energy and Industrial Technology Development Organization (NEDO).
*3“Research and Development Partnership for Future Power Electronics Technology” is an association established as a joint organization of academy, industry, and government aiming to improve technical level concerning next-generation power electronics.
*4For details of this, please refer to SDK’s news release, “Showa Denko Acquires Assets Concerning SiC for Power Devices from Nippon Steel & Sumitomo Metal Group,” which was announced on August 7, 2017.