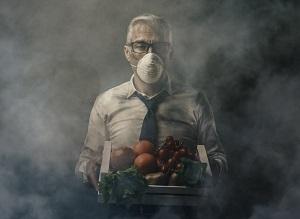 To review new research on the impacts of certain air pollutants on vegetation and discuss the consequences for biodiversity, some 135 experts from more than 35 countries met virtually (21-23 February 2022) in the framework of the International Cooperative Programme on Effects of Air Pollution on Natural Vegetation and Crops (ICP Vegetation), established under the UNECE Convention on Long-range Transboundary Air Pollution. ICP Vegetation has worked to improve the understanding of and to assess the impacts of air pollution on crops and other vegetation for the past 35 years. ICP Vegetation is led by the UK Centre for Ecology & Hydrology in the United Kingdom.

Some crops have been found to be particularly sensitive to certain types of air pollution. Ground-level ozone — formed when pollutant emissions (e.g. nitrogen oxides) from cars and other sources react with other pollutants in sunlight — affects plant growth and is estimated to cause relative global crop losses for staple foods like soy (6%-16%), wheat (7%-12%) and maize (3%-5%). At the European level, studies have estimated that the economic losses owing to the impact of ozone on 23 crops amounted to €6.7 billion, with global losses estimated at up to US$ 26 billion. Scientists at the meeting discussed impacts between ground-level ozone pollution and climate change, and interactive impacts between ozone and other air pollutants such as nitrogen on vegetation, including consequences for biodiversity.

Mosses as monitors of pollution

Since 1990, naturally growing mosses have been sampled every five years in the framework of ICP Vegetation. Mosses are used as so-called biomonitors of atmospheric deposition of pollutants, such as heavy metals and nitrogen, to assess spatial pollution concentration patterns and temporal trends across Europe and beyond. Mosses thus provide a good indication of areas at risk from high pollutant deposition. Participants at the meeting discussed progress within the 2020/21/22 moss monitoring survey, welcomed the contributions of many scientists from countries in the region and encouraged further contributions.