GlobalData expects 2030's farms to become ‘smart,’ driven by need to produce more food on less land; to maximize yield, farms must collect huge amounts of data to ensure highest crop efficiency, which will lead to greater automation in farming by 2030

Climate change and population growth will drive the need for ‘smart’ crops to meet food demands, according to GlobalData. The leading data and analytics company notes that the huge amount of data that would be needed to ensure the highest crop efficiency will lead to greater automation in farming by 2030.

GlobalData’s latest report, ‘Tech in 2030- Thematic Research’, predicts that 2030’s farms will become ‘smart’, driven by the need to produce more food on less land. To maximise yield, farms will need to collect and monitor huge amounts of data from their crops and livestock. For example, to grow wheat in a field effectively, growth rate, nutritional content, fluid intake, and soil quality should be recorded, collected via numerous sensors. This data will be fed into agriculture technology platforms, which combined internet of things (IoT) and automation in order for the crops to self regulate.

GlobalData’s report highlights that we are already seeing growth in agricultural technology. Hiring for smart greenhouse-related roles has more than tripled from 2021. 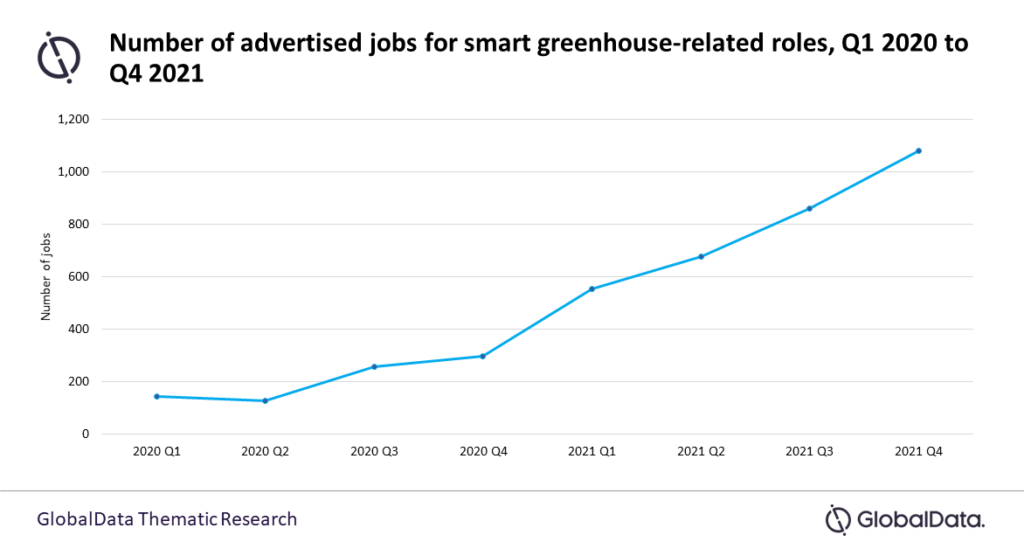 Foster Jones adds: “Investment in smart greenhouses is only going to increase as the challenges facing the agricultural sector call for more automation. As automation increases, farmers will by hired more and more for their technical expertise and data processing skills, as well as their knowledge of the agricultural process. Current young farmers should start upskilling now to give themselves an edge.”

GlobalData’s report also reveals that the agricultural drone* industry is the fastest growing among the non-military drone segments, in terms of the number of patents. Agricultural drone related patents have experienced a 14-fold increase between 2015 and 2021.

Rachel Foster Jones adds: “Currently, drones conduct imaging and monitoring tasks for farms. However, there is rapid innovation in this area. Modular-based innovation will mean that drones will be able to undertake advanced crop spraying and terrain monitoring by 2030. The labor crisis and skills shortage will bolster agriculture drone demand, as they will be able to undertake time-consuming tasks.”