The technique opens a door to manufacturing of pressure-monitoring bandages, shade-shifting fabrics, or touch-sensing robots. 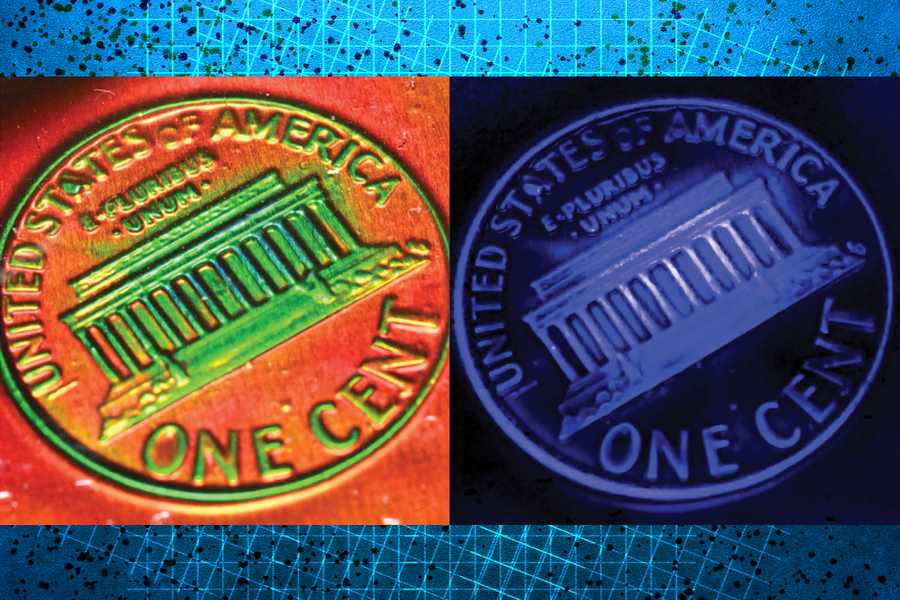 Caption:MIT researchers have developed a scalable manufacturing technique that gives materials “structural color” — color that arises as a consequence of a material’s microscopic structure, rather than from chemical additives or dyes. Here, a penny’s relief is thrown into vibrant colors when pressed into a new material developed at MIT (left). The material’s colors are then converted to a map of compressive stresses (right).
Credits:Image: Courtesy of the researchers, edited by MIT News

Imagine stretching a piece of film to reveal a hidden message. Or checking an arm band’s color to gauge muscle mass. Or sporting a swimsuit that changes hue as you do laps. Such chameleon-like, color-shifting materials could be on the horizon, thanks to a photographic technique that’s been resurrected and repurposed by MIT engineers.

By applying a 19th-century color photography technique to modern holographic materials, an MIT team has printed large-scale images onto elastic materials that when stretched can transform their color, reflecting different wavelengths as the material is strained.

The researchers produced stretchy films printed with detailed flower bouquets that morph from warm to cooler shades when the films are stretched. They also printed films that reveal the imprint of objects such as a strawberry, a coin, and a fingerprint.

The team’s results provide the first scalable manufacturing technique for producing detailed, large-scale materials with “structural color” — color that arises as a consequence of a material’s microscopic structure, rather than from chemical additives or dyes.

“Scaling these materials is not trivial, because you need to control these structures at the nanoscale,” says Benjamin Miller, a graduate student in MIT’s Department of Mechanical Engineering. “Now that we’ve cleared this scaling hurdle, we can explore questions like: Can we use this material to make robotic skin that has a human-like sense of touch? And can we create touch-sensing devices for things like virtual augmented reality or medical training? It’s a big space we’re looking at now.”

Kolle’s group develops optical materials that are inspired by nature. The researchers have studied the light-reflecting properties in mollusc shells, butterfly wings, and other iridescent organisms, which appear to shimmer and shift their color due to microscopic surface structures. These structures are angled and layered to reflect light like miniature colored mirrors, or what engineers refer to as Bragg reflectors.

Groups including Kolle’s have sought to replicate this natural, structural color in materials using a variety of techniques. Some efforts have produced small samples with precise nanoscale structures, while others have generated larger samples, but with less optical precision.

As the team writes, “an approach that offers both [microscale control and scalability] remains elusive, despite several potential high-impact applications.”

While puzzling over how to resolve this challenge, Miller happened to visit the MIT Museum, where a curator talked him through an exhibit on holography, a technique that produces three-dimensional images by superimposing two light beams onto a physical material.

“I realized what they do in holography is kind of the same thing that nature does with structural color,” Miller says.

That visit spurred him to read up on holography and its history, which led him back to the late 1800s, and Lippmann photography — an early color photography technique invented by Franco-Luxembourgish physicist Gabriel Lippmann, who later won the Nobel Prize in Physics for the technique.

Lippmann generated color photos by first setting a mirror behind a very thin, transparent emulsion — a material that he concocted from tiny light-sensitive grains. He exposed the setup to a beam of light, which the mirror reflected back through the emulsion. The interference of the incoming and outgoing light waves stimulated the emulsion’s grains to reconfigure their position, like many tiny mirrors, and reflect the pattern and wavelength of the exposing light.

Using this technique, Lippmann projected structurally colored images of flowers and other scenes onto his emulsions, though the process was laborious. It involved hand-crafting the emulsions and waiting for days for the material to be sufficiently exposed to light. Because of these limitations, the technique largely faded into history.

Miller wondered if, paired with modern, holographic materials, Lippmann photography could be sped up to produce large-scale, structurally colored materials. Like Lippmann’s emulsions, current holographic materials consist of light-sensitive molecules that, when exposed to incoming photons, can cross-link to form colored mirrors.

“The chemistries of these modern holographic materials are now so responsive that it’s possible to do this technique on a short timescale simply with a projector,” Kolle notes.

In their new study, the team adhered elastic, transparent holographic film onto a reflective, mirror-like surface (in this case, a sheet of aluminum). The researchers then placed an off-the-shelf projector several feet from the film and projected images onto each sample, including Lippman-esque bouquets.

As they suspected, the films produced large, detailed images within several minutes, rather than days, vividly reproducing the colors in the original images.

They then peeled the film away from the mirror and stuck it to a black elastic  silicone backing for support. They stretched the film and observed the colors change — a consequence of the material’s structural color: When the material stretches and thins out, its its nanoscale structures reconfigure to reflect slightly different wavelengths, for instance, changing from red to blue.

The team found the film’s color is highly sensitive to strain. After producing an entirely red film, they adhered it to a silicone backing that varied in thickness. Where the backing was thinnest, the film remained red, whereas thicker sections strained the film, causing it to turn blue.

Similarly, they found that pressing various objects into samples of red film left detailed green imprints, caused by, say, the seeds of a strawberry and the wrinkles of a fingerprint.

Interestingly, they could also project hidden images, by tilting the film at an angle with respect to the incoming light when creating the colored mirrors. This tilt essentially caused the material’s nanostructures to reflect a red-shifted spectrum of light. For instance, green light used during material exposure and development would lead to red light being reflected, and red light exposure would give structures that reflect infrared — a wavelength that is not visible to humans. When the material is stretched, this otherwise invisible image changes color to reveal itself in red.

“You could encode messages in this way,” Kolle says.

Overall, the team’s technique is the first to enable large-scale projection of detailed, structurally colored materials.

“The beauty of this work is the fact that they have developed a simple yet extremely effective way to produce large-area photonic structures,” says Sylvia Vignolini, professor of chemistry and bio-materials at the University of Cambridge, who was not involved in the study. “This technique could be game-changing for coatings and packaging, and also for wearables.”

Indeed, Kolle notes that the new color-changing materials are easily integrated into textiles.

“Lippmann’s materials wouldn’t have allowed him to even produce a Speedo,” he says. “Now we could make a full leotard.”

Beyond fashion and textiles, the team is exploring applications such as color-changing bandages, for use in monitoring bandage pressure levels when treating conditions such as venous ulcers and certain lymphatic disorders.

This research was supported, in part, by The Gillian Reny Stepping Strong Center for Trauma Innovation at the Brigham and Women’s Hospital, the National Science Foundation, the MIT Deshpande Center for Technological Innovation, Samsung, and the MIT ME MathWorks seed fund.