Canadian investors reduced their holdings of foreign securities by C$1.4B in August, mainly US corporate securities; non-residents added C$22.0B of Canadian securities to their holdings, led by acquisitions of bonds: Statistics Canada

Foreign investment in Canadian securities growth accelerated in August and reached $22.0 billion, the largest investment since April. Meanwhile, Canadian investors reduced their holdings of foreign securities by $1.4 billion, after buying $4.3 billion in July.

As a result, international transactions in securities generated a net inflow of funds of $23.4 billion in the Canadian economy in August, for a total of $145.9 billion in 2022. 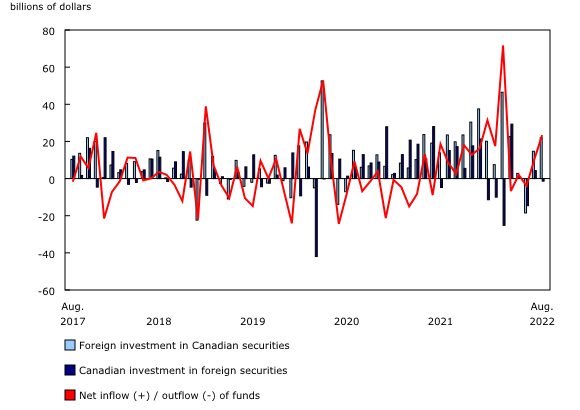 Strong foreign investment in Canadian bonds
Non-residents added $22.0 billion of Canadian securities to their portfolios in August, led by acquisitions of bonds. Overall, the foreign investment in Canadian bonds totalled $20.1 billion and mainly targeted new bonds of Canadian chartered banks denominated in US dollars and euros. In addition, foreign holdings of bonds issued by the federal government ($6.1 billion) and by their enterprises ($5.1 billion) were up; they were mainly bonds that mature in three years or less.

Chart 2: Foreign investment in Canadian bonds, by sector of issuer 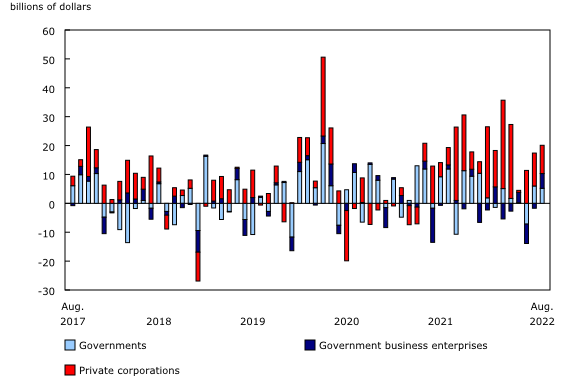 Foreign investors reduced their holdings of Canadian shares by a marginal $15 million in August. This decrease followed four consecutive months of larger divestment totalling $16.6 billion. In August, non-residents disposed of shares of the manufacturing industry and the energy and mining industries. This activity was moderated by foreign acquisitions of shares of Canadian chartered banks, as well as shares of firms of the trade and transportation industries. Canadian share prices, as measured by the Standard and Poor's/Toronto Stock Exchange composite index, went down by 1.8% in August. 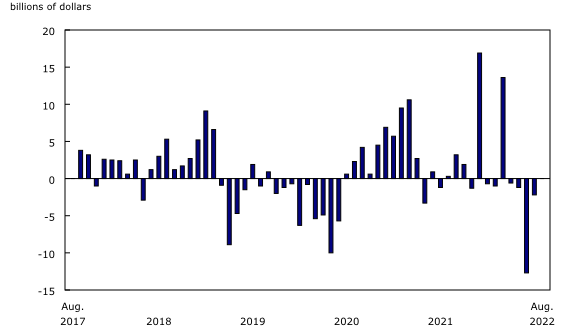 Canadian divestment in foreign shares continues
Canadian investors reduced their holdings of foreign securities by $1.4 billion in August, after investing $4.3 billion in July. The reduction in August was mainly due to sales of US corporate securities and was moderated by acquisitions of non-US foreign bonds.

Canadian investors reduced their exposure to foreign equity securities by $2.3 billion in August, resulting in a seventh month of divestment in 2022. From the beginning of 2022 to August, investors sold $57.6 billion of foreign shares compared with an investment of $71.2 billion over the same period in 2021. Canadian investors disposed of $1.4 billion worth of US shares in August, largely investment fund shares tracking broad stock market indices. US stock prices, as measured by the Standard and Poor's/Toronto Stock Exchange composite index, were down by 4.2% in August and by 17.0% since the beginning of 2022. 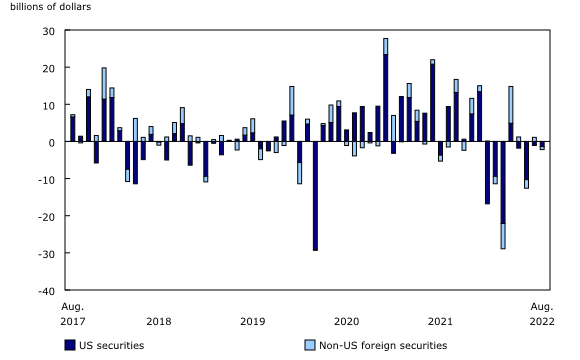 At the same time, Canadian investors acquired $862 million of foreign debt securities. The activity was led by purchases of non-US foreign bonds ($2.0 billion) and was moderated by sales of US corporate bonds ($1.4 billion).

Next release
Data on Canada's international transactions in securities for September will be released on November 18.

Products
The Canada and the World Statistics Hub (Catalogue number13-609-X) is available online. This product illustrates the nature and extent of Canada's economic and financial relationship with the world using interactive graphs and tables. This product provides easy access to information on trade, investment, employment and travel between Canada and a number of countries, including the United States, the United Kingdom, Mexico, China, and Japan.