Brazil has the ability to grow more soybeans without deforesting the Amazon rainforest, according to newly released four-year study by the University of Nebraska-Lincoln and its research partners in Brazil

Developing countries around the globe face a challenge that pits economic growth against environmental protection. As they expand their agricultural production, they often convert forest into cropland and pasture. But the large-scale removal of trees weakens the world’s ability to prevent further climate deterioration and biodiversity loss.

Brazil presents a key example. The country is home to the world’s largest area of rainforest — some 1.2 million square miles, an area more than 16 times the size of Nebraska. The Amazon contains large tracts of rainforests that, when converted to agriculture, release a huge amount of carbon dioxide into the atmosphere, exacerbating climate change.

Increasing agricultural production is a national priority for Brazil, the world’s largest soybean exporter. Since the 1990s, agricultural encroachment has eroded major areas of the country’s rainforest. During 2015-19, the Amazon basin accounted for a third of the land converted for Brazilian soybean expansion. 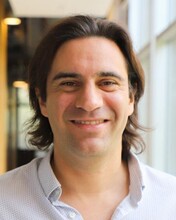 A newly released four-year study by the University of Nebraska-Lincoln and its research partners in Brazil identifies a path forward that would allow Brazil to strengthen its agricultural sector while safeguarding the rainforest. The scientists’ recommendations have broad applicability to other developing countries facing a similar challenge.

“In the current context of high grain prices and food supply disruptions, we believe there is a critical need for major crop-producing countries to reassess their potential to produce more on existing cropland,” the authors wrote in an article published Oct. 10 in the journal Nature Sustainability. “Without an emphasis on intensifying crop production within the existing agricultural area, coupled with strong institutions and policies that prevent deforestation in frontier agricultural areas, it would be difficult to protect the last bastions of forests and biodiversity on the planet while being sensitive to the economic aspirations of countries to develop.”

Since 2000, moratoria and incentives have been used to slow deforestation in Brazil. However, sharply increased commodity prices and political pressure to quickly recover from combined impacts of the COVID-19 pandemic and war in Ukraine have placed the Amazonian rainforest under heightened threat. If current trends continue, Brazil will convert about 57 million acres to soybean production in the next 15 years, with about one-fourth of the expansion occurring in environmentally fragile lands such as rainforest and savannah.

Yet prohibiting cropland expansion would cost Brazil an estimated $447 billion in lost economic opportunity through 2035. 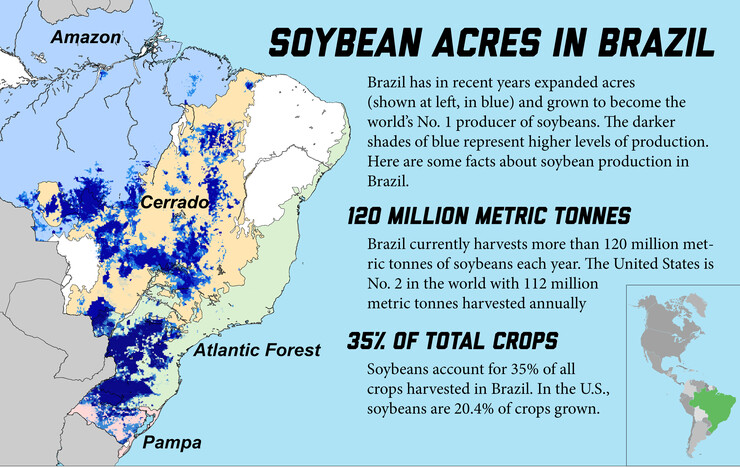 The study led by Patricio Grassini, Sunkist Distinguished Professor in Agronomy and associate professor in the Department of Agronomy and Horticulture at Nebraska, shows how it could be possible for Brazil to expand its agricultural production without converting more rainforest and savannah to crops. With a carefully managed strategy to intensify production on existing acres, the country could increase its annual soybean output by 36% by 2035 while reducing greenhouse gas emissions by 58% compared to current trends.

Grassini and his co-authors describe a three-pronged “intensification” strategy that calls for:

Brazil’s tropical and subtropical climates make it possible to cultivate two crops on the same land during the growing season in most regions, Grassini said. Plus, “livestock production is huge in Brazil,” he said, “and our study shows there is a big opportunity for Brazil to increase livestock-based production systems and by doing so, free up some of the area currently used for livestock production and use that land for producing more soy.”

Detailed modeling for the project indicates that by 2035, the strategy could boost Brazil’s soybean production by 36%. At the same time, Grassini said, Brazil could “eliminate deforestation completely and essentially reduce the amount of carbon dioxide equivalents released into the atmosphere, helping to mitigate climate change.”

“This approach strengthens agriculture while protecting fragile ecosystems that are important from a perspective of climate change mitigation as well as biodiversity conservation,” he said.

To determine how much yields could be improved on existing Brazilian farm ground, the scientists examined soybean production in four key regions: the Pampa and the Atlantic Forest regions along the Atlantic coast, where soybean cultivation has been underway for about 50 years, and the Amazon and the Cerrado regions in Brazil’s interior, where soybean production began after the turn of the 21st century. The analysis made extensive use of the Global Yield Gap Atlas previously developed by Grassini and colleagues at Nebraska. The atlas is the world’s leading database on high-quality agronomic data, covering more than 15 major food crops across more than 75 countries. 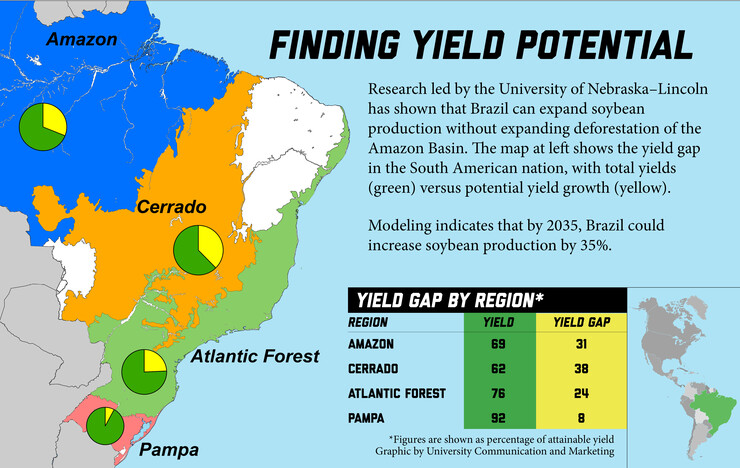 “By showing that it is possible to produce more on existing agricultural land,” the scientists wrote, “this research study is bringing real solutions to the table and can have a massive impact to help Brazil produce more while protecting the environment.”

Success on the dual goal of agricultural intensification and protecting the forest will require strong institutions, proper policy and enforcement to make sure those productivity gains effectively translate into forest preservation, Grassini cautioned. Still, the intensification approach can help achieve a reasonable balance between crop production and the protection of fragile ecosystems.

Grassini’s team calculated three scenarios in the four key regions: “business as usual,” where existing trends would continue; “no cropland expansion,” where additional land conversion would be prohibited; and “intensification,” where steps would be taken to increase yields, encourage second cropping and concentrate cattle production. They concluded the intensification strategy would enable Brazil to realize 85% of the projected gross income from soybean and second-crop maize, compared to current trends, while reducing global climate warming by 58%.

The four-year project involved collaboration between the University of Nebraska–Lincoln and universities in Brazil, including the University of Sao Paulo, Federal University of Santa Maria and University of Goias, as well as Embrapa, the leading agricultural research organization in Brazil. Coauthors on the project included Juan Pablo Monzon and José F. Andrade, former research assistant professors in agronomy and horticulture at Nebraska. The project was funded by the International Plant Nutrition Institute, Research Foundation of the State of São Paulo, Brazilian Research Council, Research Foundation of the State of Rio Grande do Sul, and the Global Engagement Office in Nebraska’s Institute of Agriculture and Natural Resources through the FAPESP-UNL SPRINT program. 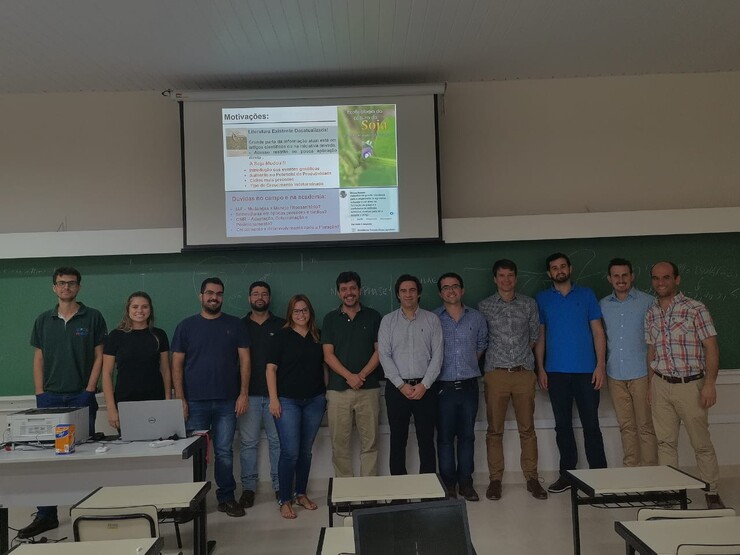