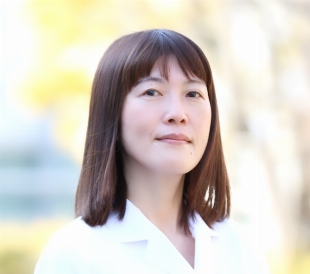 Overview of award-winning accomplishment
[Name of award-winning accomplishment]
Study of human skin component distribution analysis using near infrared and Raman spectroscopy
[Recipient]
Mariko Egawa, Ph.D., Senior Researcher at the Shiseido MIRAI Technology Institute
[Details]
Skin component distributions and how they change had been difficult to observe in vivo with conventional methods, which required processing a section of skin with a specialized chemical. However, a non-invasive evaluation was achieved through the use of three spectroscopic techniques (near infrared spectroscopic imaging, spontaneous Raman scattering spectroscopy, and non-linear Raman scattering spectroscopy). For the first time, the response of skin components such as water, proteins, and lipids to the external environment, and the detailed process of epidermal differentiation as it pertains to skin metabolism were visualized. This provides new, fundamental knowledge to dermatology. This knowledge is being applied to the development of the company's products, and through numerous academic presentations, it is contributing greatly to the advancement of science and technology in Japan and around the world.

Comments from Mariko Egawa, Ph.D., Senior Researcher
It is a great honor to receive the Award for Science and Technology (Research Category). I would like to use this opportunity to express my deepest thanks to The Spectroscopical Society of Japan, who provided the recommendation, and to the individuals who supported this research. As a result of this research, spectroscopic methods can now be applied to non-invasive measurements and evaluations of the skin. This will lead to the creation of new knowledge in dermatology, which is the foundation of beauty, health, and medicine, and it will contribute to industrial and academic fields. The condition of the skin is linked to physical and mental health. I would like to continue to pursue research from a cross-disciplinary perspective and contribute to the development of science and technology in order to realize a society in which people can live in good health and happiness.

Figure 2
Distribution of components in the skin as visualized by non-linear Raman scattering spectroscopy
(Selected from the related research paper (2) described below)
The state of epidermal metabolism was evaluated at the cellular level by using a non-invasive method to visualize the micro-distribution of skin components such as proteins and lipids.