New England’s forests are an underrated asset in fight against climate change, already sequestering equivalent of 14% CO2 emissions; they also remove more than 760,000 tons/year of air pollution, worth about US$550M in health benefits: report 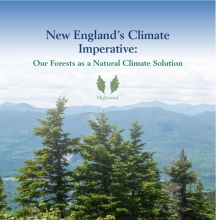 New England’s forests are an underrated asset in the fight against climate change, already sequestering the equivalent of 14 percent of carbon emissions across the six states and capable of much more. Through a menu of complementary strategies, forests could sequester at least 20 percent of carbon emissions while also enhancing critical co-benefits such as cleaner air and water, greater recreational opportunities, and jobs. The report was a collaborative effort between Harvard Forest, the Highstead Foundation, and KKM Environmental Consulting.

Summarizing the current and possible future climate change mitigation potential of New England’s forests, the study, “New England’s Climate Imperative: Our Forests as a Natural Climate Solution,” found that while addressing climate change requires action on multiple fronts, the region’s forests already play a critical role in removing carbon from the atmosphere – and can do even more.

“As the world heads for climate devastation, we must use all the tools in our toolbox to reduce harmful carbon emissions and create a cleaner tomorrow,” said Geordie Elkins, Highstead Executive Director. “This work shines a bright spotlight on how forests can play an even greater role in addressing climate change.”

Researched and written by Highstead and its partners, the report seeks to inform the policy-making process by detailing the carbon benefits of 5 complementary pathways that, taken together, can greatly enhance the forests’ contributions to mitigating climate change. These five pathways are:

The report includes additional resources, including an analysis and summary of region-wide and state-level forest contributions, ongoing state climate actions, and future potential.

“While each of these pathways is valuable on its own, our report finds that New England has an opportunity to accrue optimum climate benefits through combined implementation of these five complementary pathways,” said Kavita Kapur Macleod, KKM Environmental Consulting and a lead author of the report. “Our forests have the potential to absorb nearly 20 percent of GHG emissions now, expanding to 97 percent of emissions if all existing state-level emissions goals are met across the region. The ideal course is to take an ‘all of the above’ approach to address a climate crisis that is accelerating in pace, scale and impact.”

“Forests are already doing so much to mitigate climate change, and that’s without really trying,” said Jonathan R. Thompson, Research Director and Senior Ecologist at the Harvard Forest, a department of Harvard University, and a lead author. “What this report shows is how with even moderate changes in land-use practices we can increase the amount of carbon sequestered and stored in our landscape. To me, as I watch us fail to meet nearly every emissions reduction target, the case for including New England forests in our policy discussions just gets stronger and stronger. These are things we can do today and they come with a range of other benefits that are good for all of society.”

New England forests already provide enormous – and largely unrecognized – climate mitigation benefits and are a globally important carbon sink. For example, they remove over 760,000 tons of air pollution annually, worth approximately $550 million in health benefits. Their value as a climate solution will grow as GHG reduction targets by the six New England states are met.

David Foster, a co-author of the report, Highstead board member, and Director Emeritus of Harvard Forest, adds, “In New England, nature is a major ally in our effort to address the global crises of climate, biodiversity, and human health. If we can conserve forest infrastructure and embrace the pathways outlined in our report, we can increase forest carbon sequestration and help all six states achieve their emissions targets. Lawmakers throughout New England should heed the recommendations in this study as they develop policies and strategies to meet their state climate goals.”

The study concluded that the cumulative potential carbon benefits of the five pathways amount to almost 360 million tons of CO2e (carbon dioxide equivalent) over 30 years, or the equivalent of displacing the total 30-year energy consumption of nearly 1.3 million New England households.

Highstead and other study authors urged policymakers to prioritize New England’s forests as an essential natural solution as states move forward in the fight against climate change.