US housing prices on rise after 30% drop nationally since 2006, but rebound still uneven, with Zillow economist calling it a 'ZIP code by ZIP code recovery'

TYSONS CORNER, Virginia , November 28, 2012 (USA Today) – Lauren Vance has been shopping for her first home near Sacramento for five months.

The 26-year-old police officer lost 13 bids in a competitive market marked by strong investor interest and a tight supply of homes for sale. Given price increases, she has also had to pursue smaller homes to stay inside her budget.

Almost 2,800 miles away in Jacksonville, homeowners Amanda and Chris Dean would like to buy a bigger home. But they haven't been able to sell theirs for enough money to finance a new purchase.

Welcome to the dichotomy that is the U.S. housing market.

Six years since the start of the greatest housing collapse since the Great Depression, one doesn't have to look very far to see signs of a recovery. Nationally, home prices are rising after more than a 30% drop since mid-2006. More good news arrived Tuesday, as the Standard & Poor's/Case-Shiller home price index reported third-quarter prices were up 3.6% from a year ago, and September's 20-city index reached its highest level in two years. Foreclosures have slowed in most of the country after having decimated hundreds of U.S. cities. Rather than being a drag on the U.S. economy, housing is now seen as a contributor to growth.

"With six months of consistently rising home prices, it is safe to say that we are now in the midst of a recovery in the housing market," said David Blitzer, chairman of the index committee at S&P.

Yet there's a reason housing experts and economists won't yet pop the cork on the champagne. Just as the housing bust hit some areas harder than others, the recovery has been kind to some cities while unforgiving in others.

Despite the national numbers, prices aren't rising everywhere. The still-shaky economy fuels other concerns, particularly threats of recession due to the looming "fiscal cliff."

Zillow's data show that 183 of 252 markets nationwide hit bottom in the third quarter, after years of largely falling, and probably won't fall more. Prices were still falling in the other 69 markets, Zillow says. Yet on a national basis, 140 economists recently surveyed by Zillow predicted home prices would rise an average 15.2% from the end of last year through 2016, or from 2.3% to 3.4% a year.

More-bullish economists, including John Burns of John Burns Real Estate Consulting, see prices rising 5% to 7% a year through 2016. If so, they'd far exceed the average 3.65% a year growth in prices that defined the national housing market from 1988 to 2000 -- before the housing bubble started to form, Zillow says.

Burns argues that the housing sector has more tailwinds than headwinds.

Case-Shiller's index of 20 leading cities showed September prices up 3% year-over-year, with increases in 17 of the cities on an annual basis, led by Phoenix at 20%, annual prices largely flat in Atlanta and down in Chicago and New York.

Sales of existing homes are also up, by 11% in October from the same month last year. Meanwhile, the supply of homes for sale has fallen to the lowest in a decade, the National Association of Realtors says. That should help prices. New home sales are also doing better. After touching a record low in 2011, they increased 4% in the third quarter from the second, IHS Global Insight reported.

Beyond the sales and price trends, economists say housing has some strong drivers, including:

•Affordability. Housing is the most affordable it has been in decades.

Credit the fall in home prices and low interest rates. The U.S. average for a 30-year fixed mortgage hit a record low of 3.31% as of Nov. 21, Freddie Mac says.

Even Robert Shiller, the famed Yale University economist who helped create the Case-Shiller index, says it's a good time to buy, assuming someone really wants to be a homeowner vs. a renter: "It's very affordable if you want that."

Nationally, home affordability has improved an average of 35% since the 1985-2000 period, Zillow says, based on home price and income data in 143 major U.S. markets. Consumers now spend an average 13% of their monthly gross incomes on mortgage payments vs. 20% historically. In mid-2006, at the height of the housing boom, it was 24%.

Alison and Nicholas Arnold of Wilmington, N.C., recently bought their first home: a four-bedroom, 3.5-bath home for $372,000. Their market suffered a 31% decline in home values in the past five years, Zillow data show. The lower home prices and good interest rates enabled the couple to buy such a big home, says Alison Arnold, a 28-year-old health coach.

"We wanted something we could grow into," she says.

•Prices. Rising prices are convincing buyers that it's time to act.

The Fraustos started shopping in late spring. By the time they purchased, similar homes had risen in price by $10,000, Jose Frausto says. Median home prices in the area fell 36% from 2006 through 2010, DataQuick data show.

"I think I got in at the right time," Jose Frausto says.

Even if home price gains slow from their current pace, the fact that they're not falling will help get more buyers into the market, says Glenn Kelman, CEO of online brokerage Redfin.

•Stronger economy. The nation's unemployment rate dropped to 7.9% in October from its peak of 10% in the fall of 2009. Employed people buy homes and are less likely to default on loans. Stock prices are up despite recent jitters about the fiscal cliff. The Conference Board reported Tuesday that consumer confidence in November was the highest in 41/2 years and that 6.9% of those surveyed said they plan to buy a house within six months. That's the highest percentage in two years.

Now, it's clawed back to about half its historical level, says economist Humphries.

Some of those new households are likely to be home buyers instead of renters, given the rising cost to rent and the diminished cost to own, says Jed Kolko, chief economist of real estate website Trulia.

In 100 large metro areas, the average cost of owning a home is 45% cheaper than renting, Kolko's data show. That includes the tax benefits of owning and assumes that someone lives in the house for seven years.

Near the height of the housing bubble six years ago, it was 13% cheaper to rent than to own, Kolko's analysis shows.

Despite signs of strength, housing analysts who fear continued weakness say the market's recent uptrend lacks durability. Some economists worry that prices may resume falling if the U.S. suffers from the slowing global economy or the European debt crisis, or falls into recession from the combination of federal tax increases and spending cuts on tap in January.

"While there's a good chance prices will go up from here, I'm still not ready to call the bottom," Shiller says. "There's such wishful thinking that it's all fixed. … We have a lot of headwinds."

•Underwater homeowners. Nationwide, 45% of the almost 50 million homeowners with a mortgage have less than 20% equity in their homes, CoreLogic data show.

If people can't sell homes and walk off with enough money to put down on a new home -- plus pay a Realtor's commission -- they won't sell, says Mark Hanson, an adviser to professional investors on housing and mortgage issues. If they don't sell, they won't buy.

•High delinquency rates. Some markets also remain deeply mired in the foreclosure crisis. Nationwide, 11% of mortgages were 30 days or more delinquent or in foreclosure in September, according to mortgage tracker Lender Processing Services. Those percentages are far higher in states such as Florida and New Jersey where courts must approve foreclosures and they take months longer to complete.

Those foreclosure pipelines will "weigh on the market" in those states and cities, economist Kolko says.

•Slight shifts in surging markets. Signs of cooling are emerging in some of the hottest markets, including Phoenix and Las Vegas, which were among the hardest hit during the foreclosure crisis.

Of 100 of the largest metropolitan regions, Phoenix posted the biggest price gain in September with a 22% year-over-year jump, CoreLogic data show. Las Vegas came in fifth with an almost 11% increase. Both cities have seen strong interest from investor buyers, who are turning single-family homes into rentals.

Hanson warns that the shifts in Phoenix, Las Vegas and parts of California foreshadow the beginning of the nation's "hangover" and lack of "durability" in this year's recovery. He says sales volume will fall off as investors, who have gorged on foreclosures for the past year, back off in the face of rising prices and limited supplies of houses.

In the meantime, shoppers such as Vance are navigating quick-moving markets.

When she began looking, she'd get 10 new listings to view each week in her $160,000 price range. In recent months, she got two or three.

Given fewer foreclosures and high investor demand, the Sacramento area had just a 1.9-month supply of homes for sale in October vs. the six-month supply that Realtors generally consider to be a balanced market. As a result, Sacramento prices were up almost 7% in September year-over-year, CoreLogic says.

Vance is finally under contract to buy a home. But instead of getting one with three bedrooms, she's gone with two, says Rob Baxley, her Realtor. He's had only one other buyer this year who made more offers to win a home, and he sees no let-up in competition for lower-priced homes.

"The market is getting tighter and tighter. For buyers in that price range, it's miserable," Baxley says.

Bob Self for USA TODAY 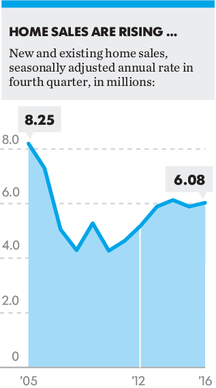 Bob Self for USA TODAY


* All content is copyrighted by Industry Intelligence, or the original respective author or source. You may not recirculate, redistrubte or publish the analysis and presentation included in the service without Industry Intelligence's prior written consent. Please review our terms of use.