The Hospital Scene From Ships to Stadiums; Health Care Gets Creative 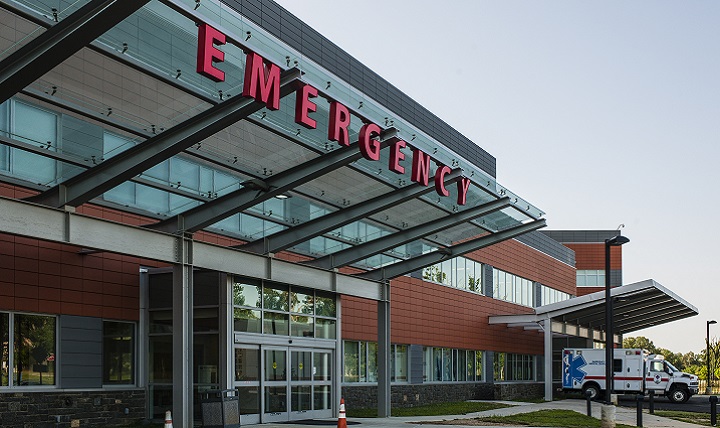 Wuhan, epicenter of the COVID-19 pandemic in China, made news in February when it threw together a 1,000-bed temporary hospital in just 10 days to deal with a flood of coronavirus patients. Near the end of February, the city had started a total of 12 temporary hospitals at a variety of venue types—including gyms, convention centers and exhibition centers.

And China isn’t alone. Across nations affected by the coronavirus pandemic, health systems are scrambling to add hospital capacity, preparing for the expected peak in hospitalizations.

Surge in Patients
Alarming predictions abound, pointing to a “surge” in coronavirus patients. (“Surge” is used quite a bit these days). The phrase begs the question—how many patients would that be?

For the United States specifically, a USA Today analysis of data from the American Hospital Association, US Census, CDC and WHO estimates 23.8 million infections in the United States. This is based on an infection rate similar to a mild flu year.

Those numbers may make COVID-19 sound like “business as usual,” but there are some key differences.

Keep in mind that we could still be experiencing a flu season, which sometimes lasts into May, according to the CDC.

COVID-19, a more-aggressive virus at the same time spells trouble for hospitals.

Based on the infection rate predicted in USA Today’s analysis, not one single US state will have enough hospital capacity for COVID-19 patients if the spread is similar to what occurred in other nations.

According to Kaiser Family Foundation, the United States has an average of 2.8 hospital beds per 1,000 people. Keep in mind that this is unevenly distributed, depending on the state.

For comparison, consider Italy: the country has 3.2 beds per 1,000 people – a tad higher than the hospital scene in the U.S. but that didn’t stop the virus from taxing Italy's health system.

In short: the world needs more hospital beds to fight the pandemic.

Pop-up Hospitals
The need for makeshift hospital space has forced health systems to get pretty creative.

Calling these facilities “pop-up hospitals” may sound a little too fun given the circumstances, but then again, “temporary hospital” doesn’t do justice to some of these ideas.

At the end of March, France introduced Europe's first "medical train" – a high-speed train equipped to handle coronavirus patients while evacuating them from Strasbourg, France, to hospitals in Pays-de-la-Loire and other regions.  Each car comes complete with medical gear and is attended by an anesthesiologist-resuscitator, an intern, a nurse anesthetist and three nurses.

Meanwhile, I think China boasts the most expansive and luxurious pop-up hospital so far.

In the UK, a Premier League soccer stadium constructed just a year ago is now being repurposed as a COVID-19 test center. Various rooms and functional areas - including the stadium’s café, players’ changing room, media interview room, underground parking lot – are given new roles in the country’s fight against the pandemic.

New York, often dubbed the “epicenter” of the U.S. outbreak, has been even harder pressed to boost its capacity. The state has increased its hospital bed count from 53,000 to 90,000 beds with the establishment of temporary facilities.

Projects include the Jacob K. Javits Convention Center in White Plains, New York. The US Army Corps. of Engineers converted the facility into a 2,000-bed hospital.
New York also received a 1,000-bed Navy hospital ship, sent to accept non-coronavirus patients and release some of the pressure from the state’s hospitals. However, the ship has since begun accepting coronavirus patients to provide further relief to hospitals.

California: “The Next New York”

California, amid fears of becoming “the next New York,” has been staring down the barrel of a huge shortage in hospital beds. Gov. Gavin Newsom has called for an additional 50,000 hospital beds to the state’s existing 75,000.

And demand has birthed some creative ideas for housing patients.

In Los Angeles County, public health authorities have set up an RV park—complete with an ocean view—to serve as a quarantine zone for coronavirus patients.

About 100 trailers at the Dockweiler RV Park are attended by medical personnel. On top of that, the county has rented motel and hotel rooms to temporarily house those infected—including the homeless.

Los Angeles is another recipient of a U.S. Navy hospital ship.

Convention and exhibition centers are the obvious choice. After all, stay-at-home policies have put a stop to conventions until further notice, freeing up hundreds of thousands of square feet of floor space. So, to name a few:

In March, Louisiana launched a project to add 1,100 hospital beds at a New Orleans convention center. The state has reported high rates of virus transmission.

China, Italy and New York have seen firsthand what it looks like for hospitals to be overwhelmed with coronavirus patients.

In other areas, it’s a waiting game, doing all we can to prepare for the promised “surge” in hospitalizations. California is still awaiting its peak in infections.

Across the U.S., all that preparing has generated some irony.

As health systems halt non-urgent treatments to free up hospital space, the result has been huge financial losses - and ensuring layoffs of medical personnel in the thousands. This is happening even as public officials fear medical labor shortages.

If the pandemic gives us our worst-case predictions, those empty beds and laid-off medical workers could fill some of the gaps in our hospital capacity.

But if not, being over-prepared sure beats the alternative.