Germany-based Mercer Rosenthal pulp mill is campaigning for the reopening of rail link connecting Saalfeld to Hof; move would connect mill to customers and suppliers located in the South and could save 80% of 1,400 tonnes of CO2 annually

As a result of the 2nd World War, Germany saw itself physically divided across the county. In 1949, the three western zones united to form the “Federal Republic of Germany” (Bundesrepublik Deutschland or BRD). At this time, the Soviet-occupied zone became the “German Democratic Republic” (Deutsche Demokratische Republik or DDR). Since these two separate parts belonged to different powers (and, later, also to different military alliances), what became known as the “iron curtain” went right through Germany.

The Rosenthal mill that you know today is located right on the past border that was between the DDR and the BRD, on DDR territory.

Travel at this time between the two states was severely restricted and many logistic chains were interrupted. Mercer Rosenthal lost part of its workforce, part of its customer base, and part of its raw material supplies as a result of the division.

Today, in Bavaria, the railroad now ends about five kilometres from the border but still operates scheduled rail passenger service. In Thuringia, not only is passenger traffic operational, but also freight traffic to a considerable extent. The main rail customers here are Mercer’s Rosenthal pulp mill and Mercer´s sawmill in Friesau. In Thuringia, the line currently ends only a few hundred metres from the former border. 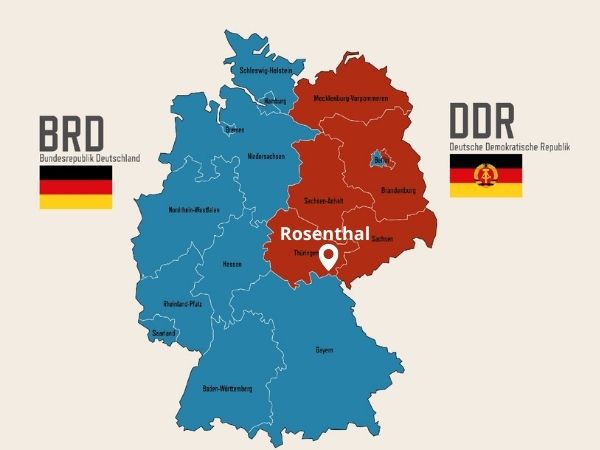 In 1990, the famous quote “grew together what belongs together” from former German Chancellor Willy Brandt could be felt in the air. It seemed to be a matter of due course that the interrupted transport connections would be put back into operation. In the case of the rail link described above, the opportunity has just not yet been seized.

Mercer Rosenthal’s customers and suppliers are mainly located in the South. However, the current existing rail connection links Rosenthal to the northwest, making rail transports unnecessarily long (thus expensive) or preventing them altogether.

This is most obvious in the case of wood supply from the Czech Republic. At present, all transports run via the Czech town of As. Here, if the railroad were restored, roundwood could be loaded onto the train, which could then travel 62 kilometres directly to Mercer Rosenthal once the track was restored. If the now existing track were used, the train would travel 276 kilometres and have to be reassembled four times. 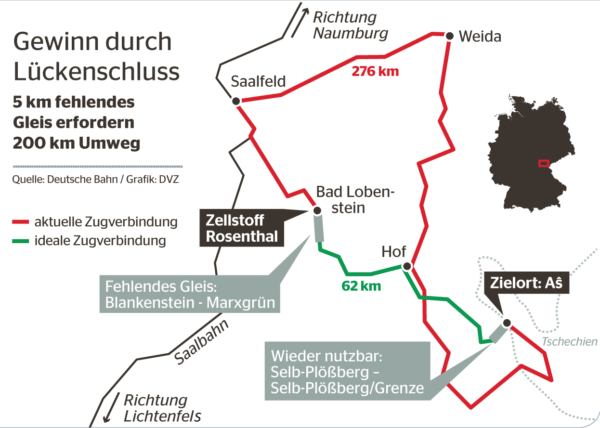 Therefore, wood incoming from the Czech Republic is at this time completely transported to the mill by truck. With 32 truck trips taking place daily, this emits 1,400 tonnes of carbon dioxide annually – 80 percent of which could be eliminated if wood transport were shifted to rail. One train with 13 wagons would replace about 30 trucks. The new, highly efficient wagons of Mercer Holz could be used, which are equipped with a silent braking system, producing substantially less noise during operation. 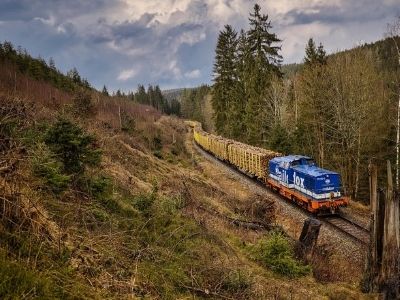 Mercer Rosenthal is campaigning for the reopening of this line, where only five to six kilometers of track is currently missing. The company is receiving support from Thuringia’s political parties, especially that from Prime Minister Bodo Ramelow. The idea is also supported by Deutsche Bahn and federal politicians. At the moment, Bavaria holds some concerns around the additional trains, worried they will be perceived as a nuisance by the population.

We have always believed that it is our duty to be a good neighbour to the communities where we operate. With this campaign to reopen the line, Mercer Rosenthal is working to communicate our solutions that have the least amount of impact to the environment and our communities. Between the significantly reduced number of trucks on the road and the Mercer Holz silent braking system on their new train wagons, we feel we can come to the most agreeable and least disruptive solution.

As part of the shift to climate-friendly and low-emission modes of transport, the recommissioning of this line would be a positive step forward.