Fraunhofer develops web-based software that generates labels for pallets, crates, tanks that are equipped with barcodes or active sensors that can be tracked via smartphone app to show when load carrier ships, arrives, is unloaded

Load carriers such as pallets, crates or tanks are indispensable for transporting all kinds of products, but hardly ever get any of the limelight themselves. Fraunhofer researchers have devoted themselves to this topic and have now developed a software to track and make visible the paths of the load carriers. This gives the logistics sector enormous opportunities to improve efficiency. With Logistikbude, the Fraunhofer researchers have even founded their own spin-off. 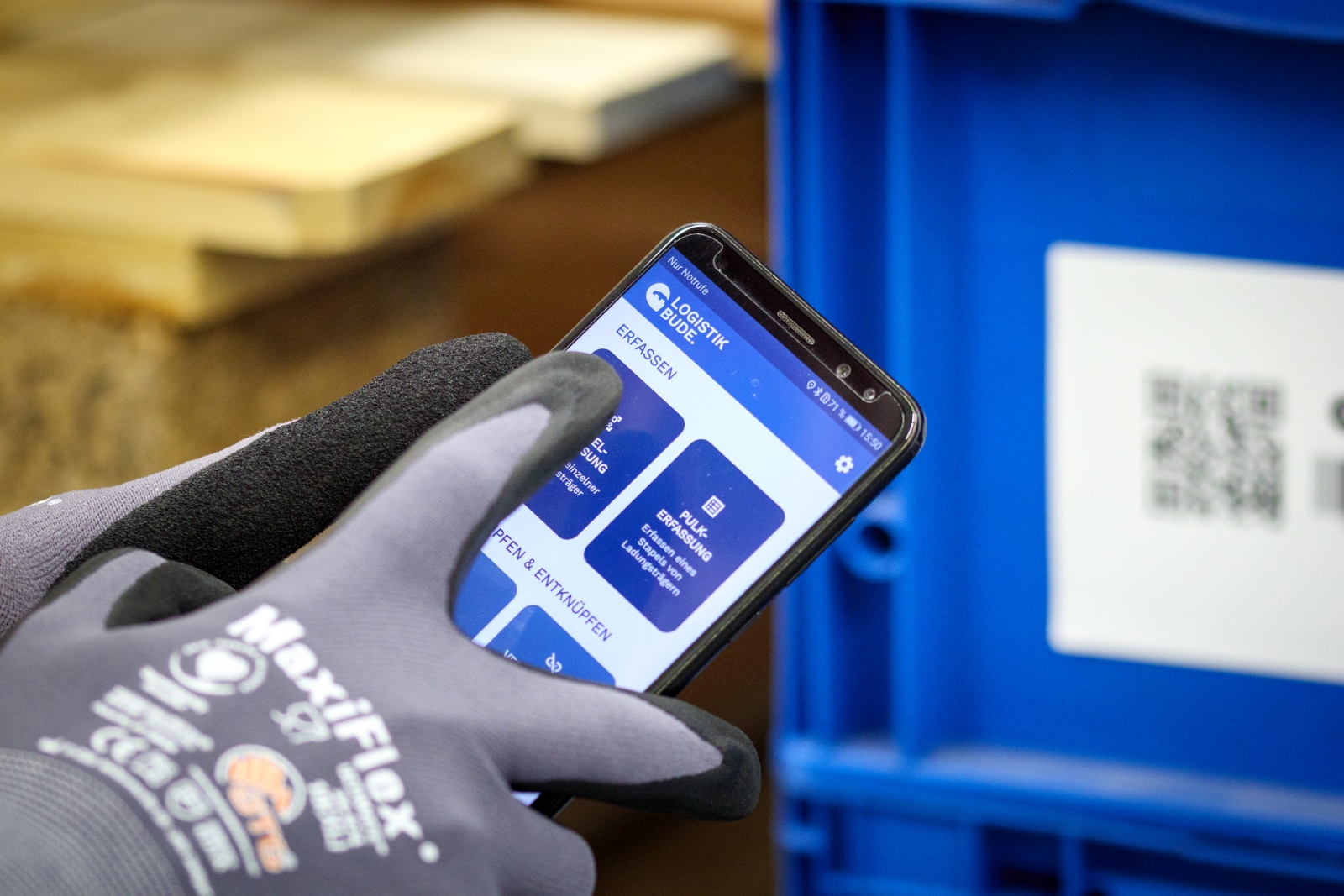 Using barcodes and the smartphone app, the current location of a load carrier is fed into Logistikbude’s system. 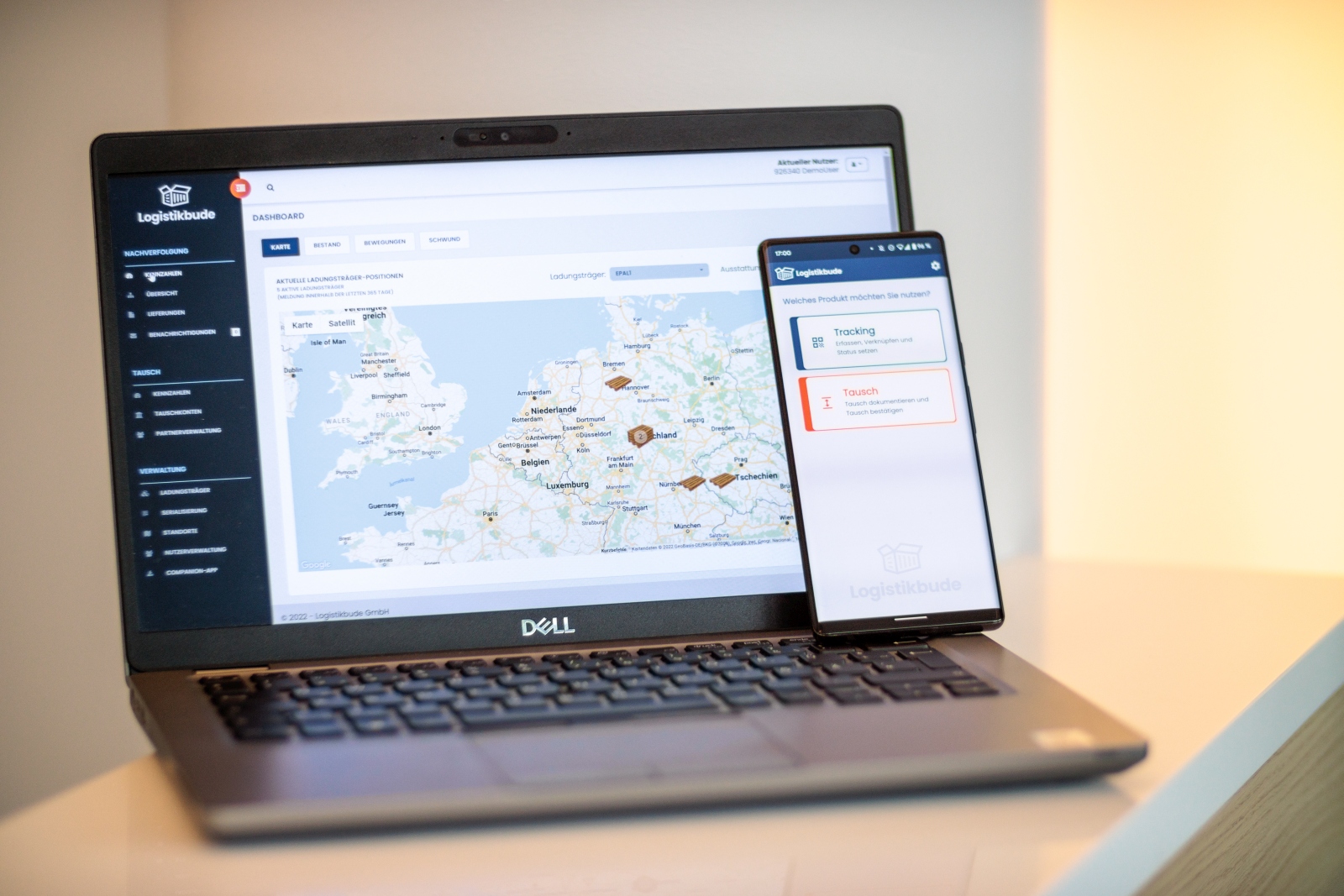 With Logistikbude, the location and status of load carriers can be viewed at any time.

Pallets, crates, containers, racks and tanks play a vital role in transporting goods. According to data from the Federal Statistical Office of Germany, approximately 101 million flat pallets — also known as Euro-pallets — were produced in Germany in 2020. The Center for Applied Research on Supply Chain Services at the Fraunhofer Institute for Integrated Circuits IIS has calculated that the German logistics sector grosses a total of 280 billion euros. As such, the logistics sector is one of the largest economic sectors in Germany. But while the whereabouts of the goods are precisely recorded and tracked, to date, the load carriers themselves have received far less attention. They often remain unattended in warehouses for days. This reduces efficiency.

At the Fraunhofer Institute for Material Flow and Logistics IML in Dortmund, researcher and logistics expert Dr. Philipp Wrycza, together with his co-founders Patrik Elfert, Jan Möller and Michael Koscharnyj, have developed a suitable software solution and recently founded their own spin-off with the appropriate name “Logistikbude”, meaning “logistics convenience store.” Wrycza has already completed his doctoral thesis on the subject of Euro-pallets at Fraunhofer IML.

The web-based software first generates a label for each load carrier and creates a digital file. At the same time, returnable load carriers — pallets, tanks, racks, containers, crates — are equipped with barcodes or active sensors. A smartphone app available for Android or iOS records each load carrier via its label both before transport and when the goods arrive at their destination. It also allows further entries about their status to be made. This data is then immediately synced to the web-based software platform. In addition to tracking the load carriers by scanning them, there is also the option to record quantities.

The customer or recipient of the goods can also access the account and record, for example, when the goods have been unloaded and the pallets are ready to be returned or to transport other goods. In this way, a joint exchange account is created in which the business partners keep each other informed about the current status of the load carriers. If load carriers that have already been emptied have not been returned promptly, a reminder email is sent automatically.

The solution has been ready and operational since January 2022. “Until now, many companies have often not even known where their own load carriers are at a given moment, for example. Now they can see where they are at any time and when they will get them back. It makes planning easier. The accelerated circulation ultimately ensures that fewer load carriers have to be purchased overall. This, in turn, contributes to increasing sustainability in the sector,” says Wrycza, co-founder and CEO of the Fraunhofer spin-off.

“We are pleased not only because Logistikbude has been created at our institute, but also because it represents a valuable tool for making even better use of efficiency potential in the field of transport and logistics. With this, Fraunhofer researchers are once again demonstrating their ability to develop practical and helpful solutions for industry,” says Prof. Michael ten Hompel, institute director of Fraunhofer IML.

The software also helps avoid problems that regularly occur between business partners. For example, if a glass manufacturer loads their transport racks with windows and has them picked up by the carrier, they either receive the empty racks back straight away, or the haulage firm delivers the goods to the recipient and then returns the racks. However, misunderstandings and conflicts arise time and again, for example if a rack is missing or if the recipient believes it is damaged. The joint management of the load carriers helps to avoid errors and surprises from the outset. This is because the status and position of each individual load carrier can be viewed transparently. For example, the recipient can now record on the smartphone app if a rack arrives damaged. Companies that already have their own load carrier management also benefit from this solution. Previously, it has not been possible, or it has only been possible at great expense, to dynamically track all these packaging materials during transit and seamlessly exchange data with business partners.

Sensors record data such as temperature and humidity

Furthermore, it is also possible to equip the load carriers with sensors. These can record values such as location, temperature or humidity and record them in the digital load carrier file. This would also allow them to provide information about the condition of food.

The Fraunhofer researchers have made the software highly user-friendly. There is no need to customize the system. “We’ve allocated one day of training, and then the customer can get started right away,” Wrycza promises.

Dr. Volker Lange, head of Packaging and Retail Logistics at Fraunhofer IML, has supported the team’s work from the very beginning: “Our researchers have come a long way from the initial good idea to having a market-ready and cleanly functioning solution. The spin-off now has the best prerequisites to successfully establish the solution on the market.”