Wholesale sales in Canada rose 0.3% to C$79.8B in March, supported by the building material and supplies and the motor vehicle and motor vehicle accessories and parts subsectors; inventories increased 0.4% to C$108.7B: Statistics Canada 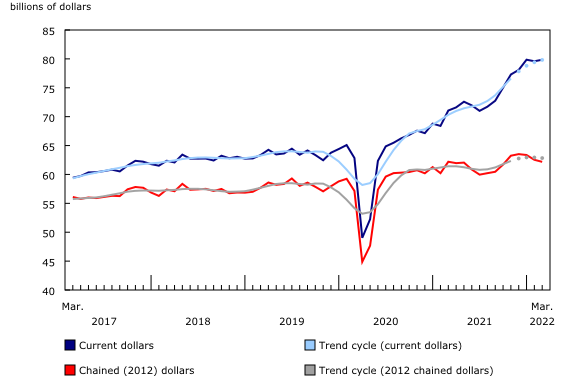 Building material and supplies sales lead gains
Sales of building material and supplies rose 3.8% in March to $14.1 billion, the fifth increase in the past six months. The gains in the subsector reflect ongoing strength in the housing industry in the United States. Housing starts in the United States rose 0.3% in March to their highest level in more than five years (US Census Bureau Report), providing a boost to Canadian exports of forestry products and building and packaging materials, which together rose 2.9% in March.

Motor vehicle and motor vehicle accessory and parts sales grew 2.6% in March, the first increase after two months of declines. Both imports (+9.9%) and exports (+7.9%) in the motor vehicle sector grew in March. Notwithstanding the small increase, automobile manufacturers across North America are not working at full capacity, with sporadic shutdowns having been required at a number of facilities across the continent in March. These sporadic shutdowns continued into April as semiconductor chip supplies have not yet returned to pre-COVID-19 pandemic levels.

Partially offsetting the increases was a 4.0% decline in sales of machinery, equipment and supplies, which was the largest movement (higher or lower) of any wholesale subsector in March. This was the first decline after six consecutive increases in the subsector. Lower sales came mostly from the computer and communications equipment and supplies industry, which fell 8.6% after reaching a historic high in February.

Overall, sales in the wholesale sector rose 3.9% in the first quarter of 2022 to $239.3 billion. Nearly half of the growth in the sector came from a 21.3% jump in sales from the lumber, millwork, hardware and other building supplies industry, as demand for housing and lumber prices both remained at high levels. Six of the seven subsectors reported gains in the first quarter of 2022, with the only decline coming in the motor vehicle and motor vehicle accessories and parts subsector, where sales fell 3.1% due to ongoing supply chain issues.

With most provinces and territories having relatively tempered monthly movements, the next largest change was a downward movement in Saskatchewan. In the province, following six consecutive months of growth, sales decreased 9.0% to $3.3 billion. While five of seven subsectors had lower sales, over three-quarters of the decline was due to a 12.1% fall in the miscellaneous subsector, which accounted for 58% of the province's sales.

In the first quarter of 2022, nine provinces and one territory had higher sales than in the fourth quarter of 2021. Together, they represented 98% of national quarterly sales. While contributing to almost 11% of the quarterly national sales, leading the gains was British Columbia. In the province, sales reached $25.0 billion, an 11.6% increase compared with the fourth quarter of 2021. This increase was largely on the strength of the building material and supply subsector. Quarterly wholesale sales increased 1.7% to $120.6 billion in Ontario, 4.5% to $45.4 billion in Quebec, and 6.0% to $25.2 billion in Alberta. Together with British Columbia, these four provinces accounted for 90% of national sales.

The inventory-to-sales ratio stayed at 1.36 in March. This ratio is a measure of the time (in months) required to exhaust inventories if sales were to remain at their levels.

Note to readers
This release incorporates annual revisions. Unadjusted monthly wholesale data were revised back to January 2021, while seasonally adjusted data were revised back to January 2018. Factors influencing revisions include the late receipt of respondent information; the correction of information in the data provided; the replacement of estimated figures with actual values (once available); the reclassification of companies within, into and out of the wholesale trade sector; and updates to seasonal factors.

Data in volume terms were revised back to January 2018.

All data in this release are seasonally adjusted and expressed in current dollars, unless otherwise noted.

Seasonally adjusted data are data that have been modified to eliminate the effect of seasonal and calendar influences to allow for more meaningful comparisons of economic conditions from period to period. For more information on seasonal adjustment, see Section 2: Issues related to analysis and interpretation.

Trend-cycle estimates are included in selected charts as a complement to the seasonally adjusted series. These data represent a smoothed version of the Seasonally adjusted time series (see Section 1: Concepts and definitions) and provide information on longer-term movements, including changes in direction underlying the series. For information on trend-cycle data, see Trend-cycle estimates – Frequently asked questions.