After biggest annual growth ever, the U.S. housing market is now worth more than $43 trillion

U.S. housing gained a record $6.9 trillion in 2021, nearly doubling what was previously the largest annual gain of $3.7 trillion in 2005. The full U.S. housing stock is now worth $43.4 trillion, according to a new Zillow® analysis. 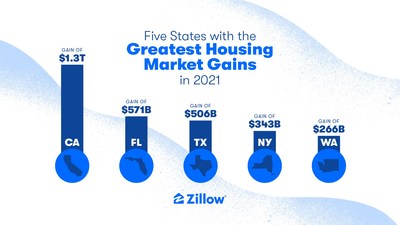 Strong demand met limited supply in 2021, driving home values up more than ever before — home values grew 19.6% last year, an all-time high in Zillow's data, which dates back more than 20 years. That remarkable rise means U.S. housing is now worth twice what it was a decade ago, in the midst of the Great Recession. Zillow economists expect another strong year in 2022.

"Even in the context of a year in which several housing records were topped, the scale of the housing market's growth in 2021 is eye-popping," said Zillow senior economist Jeff Tucker. "Not only did prices rise faster than ever, but more homes were built than in any year since 2007 as builders raced to meet demand. Skyrocketing home values may be celebrated by longtime homeowners, but are daunting for those trying to buy their first home. This year is likely to be less competitive for buyers, but it will continue to be a sellers market."

Nationally, the top one-third of highest-valued homes make up 60.8% of the total market value, while the lowest-valued one-third accounts for 12.8%. Put another way, the top tier of homes is worth nearly five times more than the bottom tier.

More than one-fifth (21.3%) of the nation's housing value is in California. The state's housing stock gained $1.4 trillion in 2021 and is now worth a total of $9.2 trillion — that is more than the combined value of the bottom 30 states.

The number of homes in a metro has, of course, the biggest influence on how much the value of the total housing stock increases, but there are a few notable markets that outperformed their size. Phoenix, for example, gained $171 billion in housing value last year, more than the entire state of Pennsylvania gained. Austin's housing market gained more than nearby Houston's despite having less than one-third of the number of homes.

Zillow Group, Inc. (NASDAQ: Z and ZG) is reimagining real estate to make it easier to unlock life's next chapter. As the most visited real estate website in the United States, Zillow® and its affiliates offer customers an on-demand experience for selling, buying, renting or financing with transparency and ease.