Confidence Remains at Lowest Levels Since Onset of the Pandemic

The Conference Board Measure of CEO Confidence™ in collaboration with The Business Council declined for the fifth consecutive quarter in Q3 2022. The Measure now stands at 34, down from 42 in Q2. The Measure has fallen deeper into negative territory, to lows not seen since the start of the COVID-19 pandemic in 2020, but consistent with prior contractionary periods. (A reading below 50 points reflects more negative than positive responses.)

The Q3 survey asked CEOs to describe the economic conditions they are preparing to face over the next 12-18 months.  An overwhelming majority—81%—said they were preparing for a brief and shallow recession, with limited global spillover, while only 7% said they do not expect a recession. Thus far, however, CEOs do not seem to be experiencing the recessionary conditions that typified recent contractions. In fact, three-quarters of CEOs say demand has risen or held steady over the past three months.

“CEO confidence plunged further in Q3, amid continued high inflation, rapidly tightening monetary policy, and ongoing geopolitical uncertainty,” said Dana M. Peterson, Chief Economist of The Conference Board. Yet, alongside this deepening concern over the direction of the economy, business leaders continue to report conditions and intentions at their own firms that paint a more nuanced picture. In fact, three-quarters of CEOs say demand has risen or held steady over the past 3 months, while a majority said they intend to continue expanding their workforce and increasing wages.”

“CEOs are now preparing for the near-inevitability of a US recession by year-end or in 2023,” said Roger W. Ferguson, Jr., Vice Chairman of The Business Council and Trustee of The Conference Board. “However, the vast majority expect the downturn to be brief and shallow—compared to just 12% expecting a deep recession, with material global spillover. Inflation remains the top challenge for CEOs, with 60% reporting that their input costs have increased or held steady over the past three months, with little expectation of easing in 2022.”

Ferguson continued: “Throughout the survey, we found signs CEOs are preparing for weakening economic conditions ahead. In Q3, 50% of CEOs expect to grow their workforce over the next 12 months, down from 63% in Q2. Likewise, 82% of CEOs expect their capital spending to grow or hold steady over the next year, down from 93% in Q2. Finally, there are signs of some easing in a historically tight labor market: 44% of CEOs reported difficulties in hiring qualified people that cut across the organization (rather than concentrated in a few areas)—down considerably from 61% in Q2.” 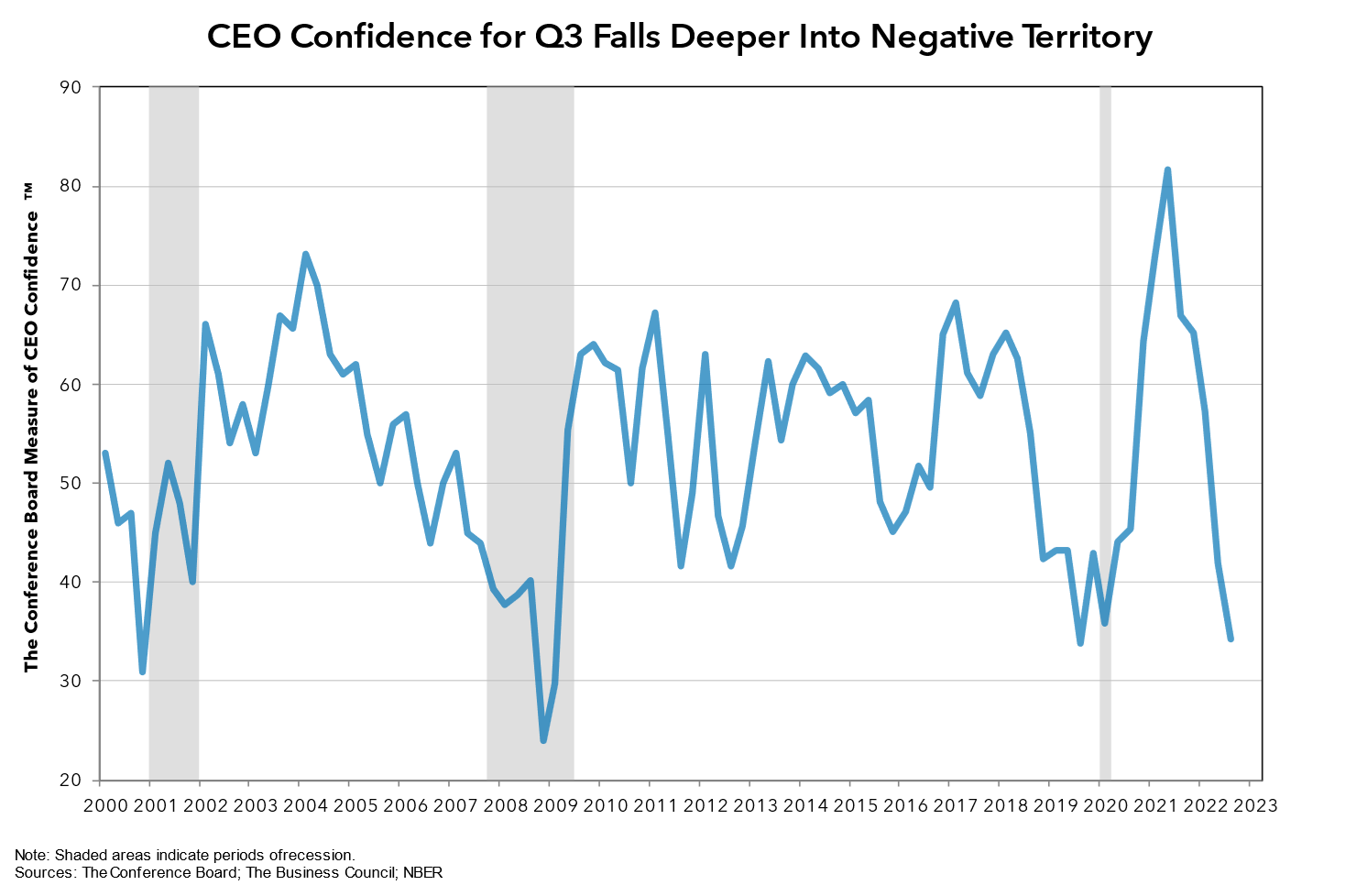 CEOs remained pessimistic about conditions in their own industries in Q3:

CEOs’ expectations regarding short-term prospects in their own industries declined further in Q3:

US Recession Outlook:
The overwhelming majority of CEOs are preparing for a US recession over the next 12-18 months. However, expectations are that it will be a brief and shallow recession with limited global spillover. Conversely, less than 10% anticipate the US will not fall into recession. 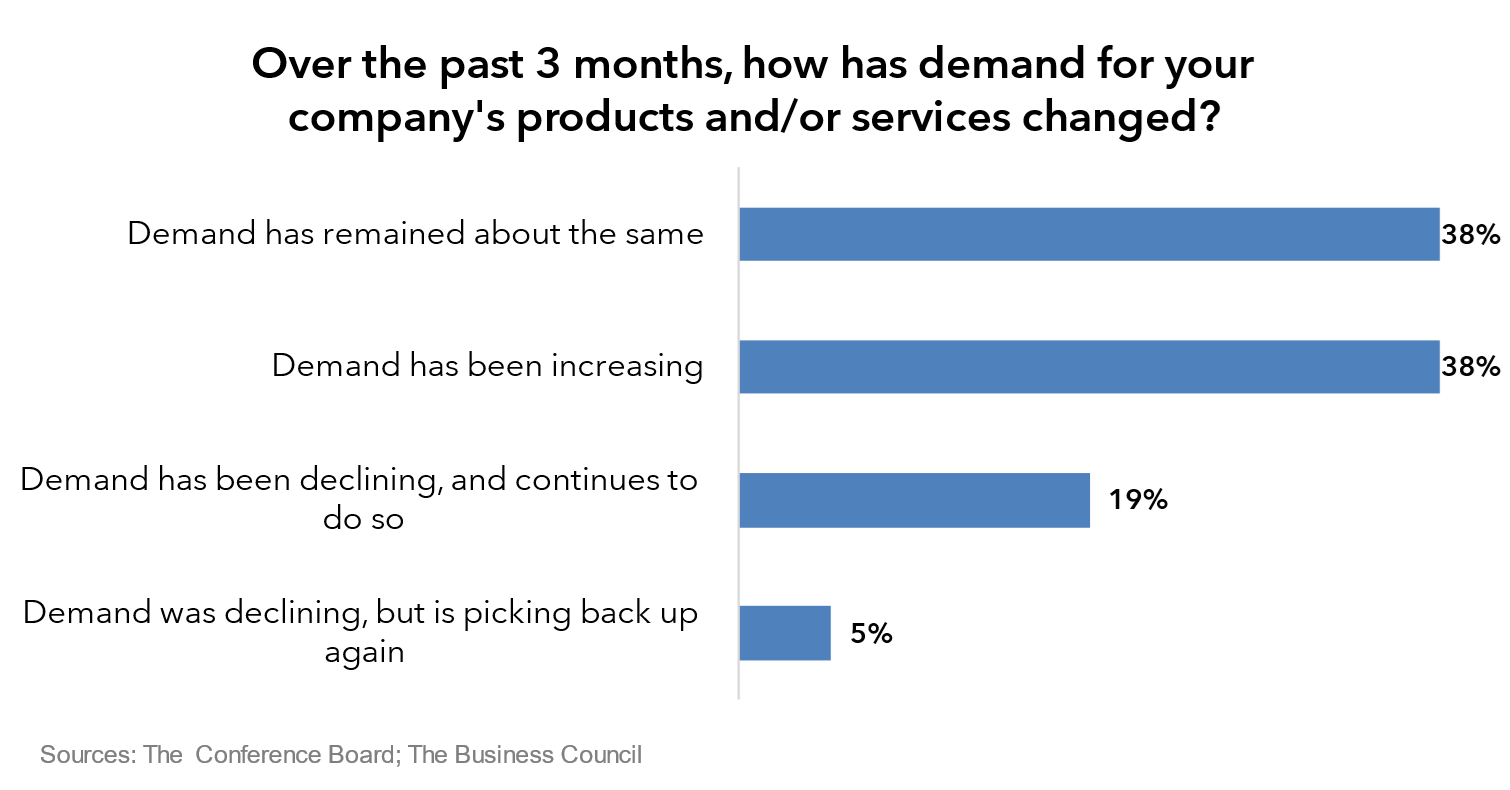 Changes in Cost Pressures:
Sixty percent of CEOs said input costs over the past 3 months remained the same or rose with no easing expected by year-end. Thirty-three percent expressed similar sentiment about cost pressures but expected some easing by year-end. Only 8% said costs eased but not significantly enough to pass along savings to customers/consumers. 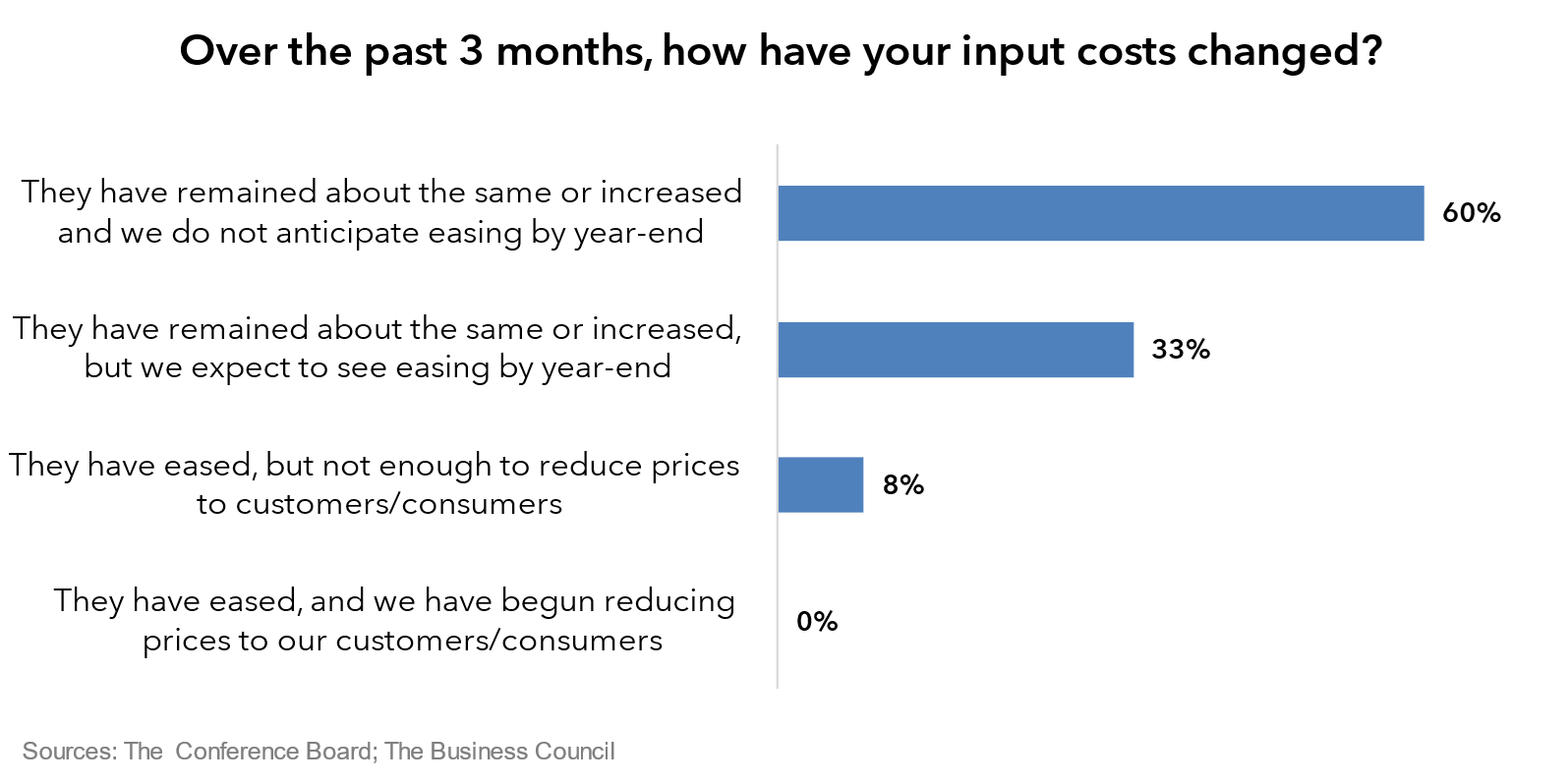