Lot values for single-family detached housing starts in 2021 increased across the nation, with the national value and six out of nine Census division values setting new records. The U.S. median lot price now stands at $55,000, according to NAHB’s analysis of the Census Bureau’s Survey of Construction (SOC) data.

In the New England and Pacific divisions, lot values surged 67% and 39%, respectively, and reached new historic highs, even after adjustments for inflation. As a result, half of single-family detached (SFD) homes started in New England were built on lots valued at or more than $200,000. Though these new lot values seem sky high, these are consistent with record lot shortages, recent significant building material price hikes and unprecedented supply challenges that have been constraining the pandemic-fueled housing boom in 2021. 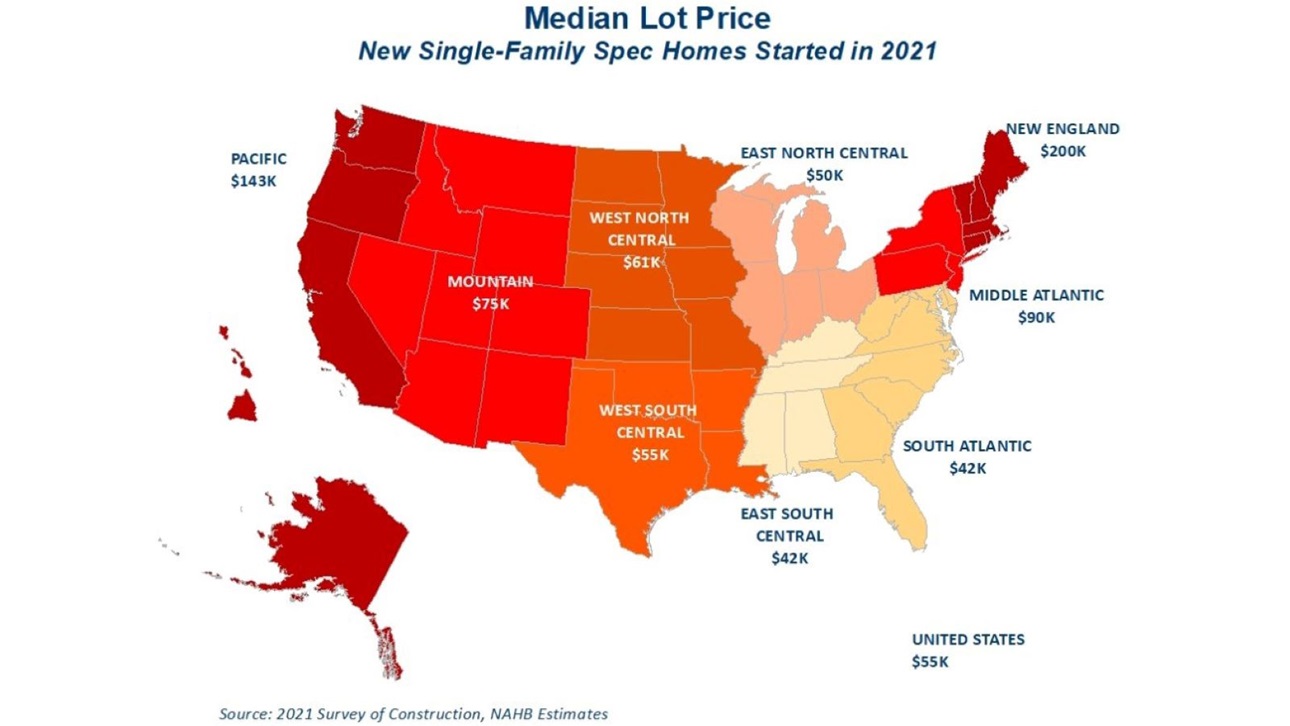 Similarly, the Middle Atlantic division recorded a strong rise in lot values and set a new record with half of lots priced at or above $90,000. The Mountain division followed with a median lot price of $75,000, a new divisional record.

Two neighboring divisions in the South — South Atlantic and East South Central — also posted divisional records. Nevertheless, these divisions remain home to some of the least expensive lots valued well below than the national median. Half of SFD spec homes started in these divisions in 2021 have lot values of $42,000 or less.

The West South Central, which includes Texas, and East North Central divisions were the only two divisions that posted moderate declines in the median lot values. Less than a decade ago, half of SFD lots here were going for $30,000 or less, almost half of the current median of $55,000.

When adjusted for inflation, lot values are now close to the record levels of the housing boom of 2005-2006, when half of lots were valued over $43,000, which is equivalent to about $57,800 when converted into inflation-adjusted 2021 dollars. At the same time, home building shifted toward smaller lots, resulting in record-high prices per acre.