Canadian investors reduced their holdings of foreign securities by C$9.7B in February, mainly sales of US shares; non-residents added C$7.4B of Canadian securities to their holdings, mainly in the form of corporate bonds: Statistics Canada

Canadian investors reduced their holdings of foreign securities by $9.7 billion in February, following an $11.4 billion divestment in January. At the same time, foreign investors acquired $7.4 billion of Canadian securities, mainly in the form of corporate bonds.

As a result, international transactions in securities generated a net inflow of funds of $17.1 billion in the Canadian economy in February. 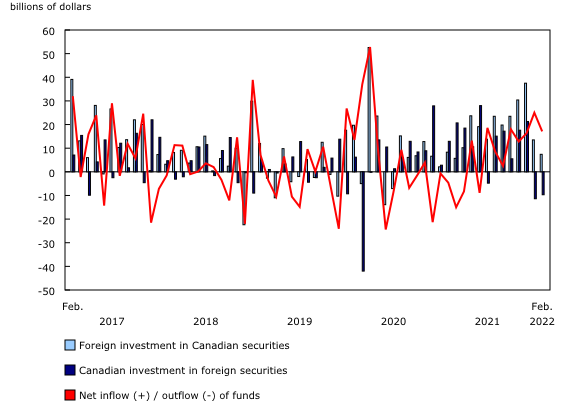 Canadian divestment in US equity securities continues
Canadian investors reduced their holdings of foreign securities by $9.7 billion in February for a second consecutive month of large divestment. The reduction was mainly because of sales of US shares and was moderated by acquisitions of US corporate debt securities.

Canadian investors continued to reduce their exposure to foreign equity securities, disposing of $11.5 billion in February, following a divestment of $16.7 billion in January. Investors sold $9.4 billion worth of US shares, largely investment fund shares tracking broad stock market indexes. US stock prices, as measured by the Standard and Poor's 500 composite index, were down by 3.1% in February, following a decrease of 5.3% in the previous month. 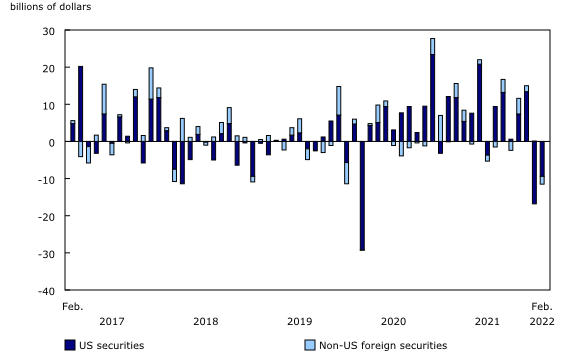 By contrast, Canadian investors acquired $1.8 billion of foreign debt securities in February. The activity was led by purchases of US corporate debt securities and was moderated by sales of US government bonds. In February, US long-term interest rates reached their highest levels since July 2019.

Foreign investment in Canadian corporate bonds reached $18.2 billion in February, the largest investment since September 2021. Acquisitions of new bonds from both public and private financial corporations, largely denominated in US dollars and euros, contributed to the investment activity. Meanwhile, non-resident investors reduced their exposure to federal money market instruments by a record $9.1 billion, after investments totalling $10.3 billion in the previous three months. The divestment activity was driven by retirements of these instruments. 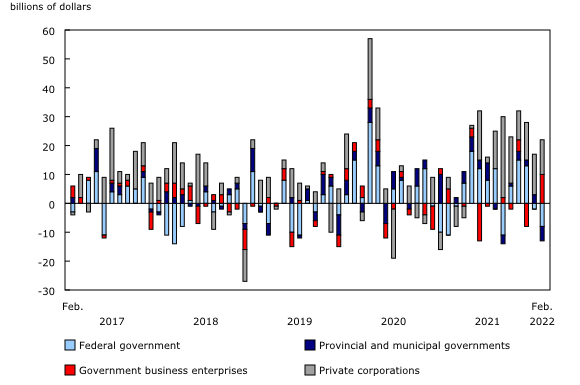 In February, short- and long-term Canadian interest rates were both up, with long-term rates rising to their highest level since December 2018. Meanwhile, the Canadian dollar appreciated against the US dollar and the euro.

Foreign investors reduced their exposure to Canadian equities by $1.0 billion in February, after divesting $641 million in January. In February, retirements of Canadian shares were again moderated by foreign acquisitions on the secondary market. Canadian share prices, as measured by the Standard and Poor's / Toronto Stock Exchange composite index, edged up in February after a slight decline the previous month.

Next release
Data on Canada's international transactions in securities for March 2022 will be released on May 17, 2022.