Foreign investors acquired $46.9 billion of Canadian securities in March, the largest investment since April 2020. At the same time, Canadian investors reduced their holdings of foreign securities by $24.0 billion, following a $9.9 billion divestment in February.

As a result, international transactions in securities generated an unprecedented net inflow of funds of $70.9 billion in the Canadian economy in March. The inflow of funds totalled $119.7 billion in the first quarter, by far the largest amount ever observed since data have been compiled. This activity occurred against the backdrop of rising interest rates and prices and uncertainty related to the global geopolitical situation. 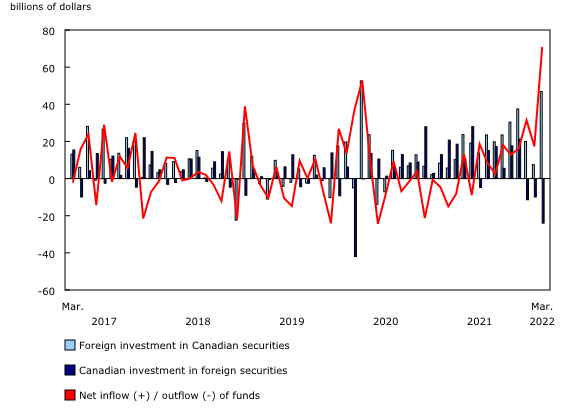 Foreign acquisitions of Canadian bonds amounted to $30.3 billion in March. Non-resident investors acquired $30.6 billion of private corporate bonds, adding to purchases of $37.2 billion recorded in the first two months of the year. The activity in March mainly targeted new bonds denominated in foreign currencies and issued by Canadian chartered banks. In addition, foreign investors increased their holdings of federal government bonds by $7.0 billion. In March, Canadian long-term interest rates have reached the highest levels since October 2018. 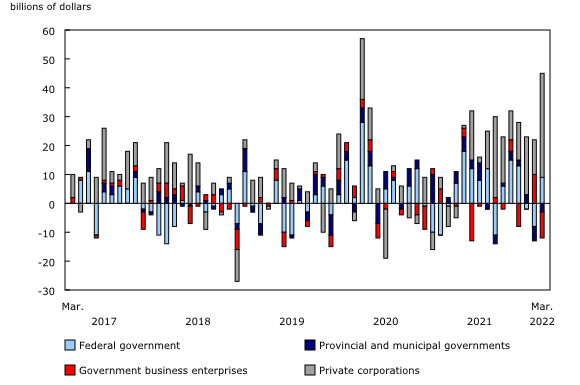 Foreign investment in Canadian shares amounted to $14.1 billion in March, led by shares of the manufacturing, as well as the trade and transportation industries. Canadian share prices, as measured by the Standard and Poor's/Toronto Stock Exchange composite index, went up 3.6% in March to reach a record-high level. 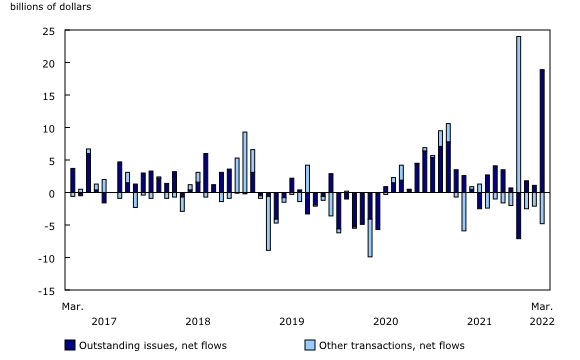 Canadian investors reduced their exposure to foreign equity markets by $27.6 billion in March. The divestment was mainly in US shares with sales totalling $20.8 billion, notably shares of large capitalization technology firms. Meanwhile, Canadian investors reduced their exposure to non-US foreign shares by $6.8 billion, the largest divestment since January 2016. 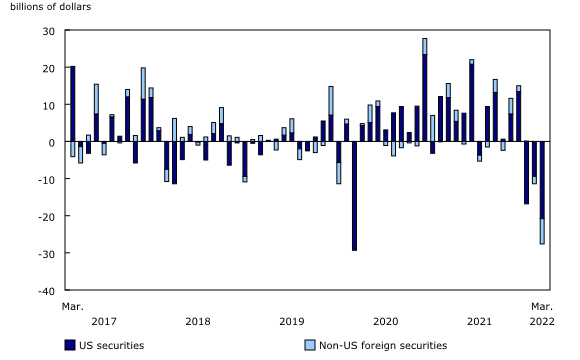 On the other hand, Canadian investors acquired $3.6 billion of foreign debt securities in March, mainly in the form of bonds. This activity was led by purchases of both US government bonds (+$4.9 billion) and US corporate bonds (+$2.8 billion) and was moderated by sales of non-US foreign bonds (-$4.4 billion). In March, US long-term interest rates reached their highest levels since May 2019.

Next release
Data on Canada's international transactions in securities for April 2022 will be released on June 17, 2022.