Home sales recorded over Canadian MLS® Systems fell by 3.9% between August and September 2022. From May through August, month-over-month declines have been progressively smaller. The September result marked a slight increase in the current sales slowdown that began with the Bank of Canada’s first rate hike back in March. 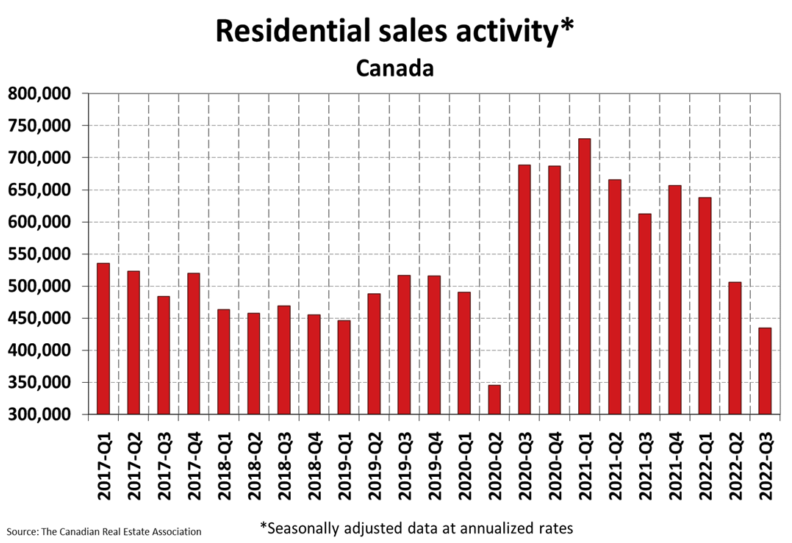 While about 60% of all local markets saw sales fall from August to September, the national number was pulled lower by the fact markets with declines included Greater Vancouver, Calgary, the Greater Toronto Area (GTA) and Montreal.

The actual (not seasonally adjusted) number of transactions in September 2022 came in 32.2% below that same month last year and stood about 12% below the pre-pandemic 10-year average for that month.

“September was another month of lower sales activity, although, with many sellers also opting to play the waiting game, the market remains on the tighter side of balanced market territory,” said Jill Oudil, Chair of CREA. “It makes for an interesting dynamic, one that doesn’t really have many historical precedents. The market has changed so much in the last year, and the adjustment to higher borrowing costs is still underway. As always, for information and guidance about how to navigate the current marketplace, your best bet is to contact your local REALTOR®,” continued Oudil.

“Up until recently, higher borrowing costs had disproportionally affected the fixed-rate space, with buyers able to qualify more easily if they went with a variable rate mortgage,” said Shaun Cathcart, CREA’s Senior Economist. “The Bank of Canada’s most recent rate hike in early September finally closed that door, so it was not a big surprise to see additional softness on the sales side. The important thing to remember is we’re still in the middle of a period of rapid adjustment, with buyers and sellers trying to feel each other out while a lot of people have had to take their home search plans back to the drawing board. As such, resale markets may remain on the quiet side for some time yet, with the flipside of that coin being even more pressure on rental markets.”

The number of newly listed homes edged back a further 0.8% on a month-over-month basis in September. This built on the 6.1% and 4.9% declines recorded in July and August, respectively, as some sellers appear content to stay on the sidelines until more buyers are ready to get back into the market. It was an even split between markets where new supply was down in September and those where it increased, with the biggest declines in the GTA offsetting the largest gains in British Columbia’s Lower Mainland.

The Aggregate Composite MLS® HPI edged down 1.4% on a month-over-month basis in September 2022, not a small decline historically, but smaller than in June, July and August.

Breaking it down regionally, most of the recent monthly declines had been in markets across Ontario and, to a lesser extent, in B.C. The standout trend in August and September was that quite a few of those Ontario markets saw monthly price declines get stopped in their tracks, mainly in the Greater Golden Horseshoe. In a few markets prices even popped up a bit between August and September.

Looking across the Prairies, prices in Edmonton and Winnipeg are down a bit from their peaks, while prices are sliding sideways in Calgary, Regina, and Saskatoon. Similarly in Quebec, prices have dipped in Montreal but are mostly flat in Quebec City.

On the East Coast, price softness that had been confined to the Halifax-Dartmouth area appears to now be showing up in parts of New Brunswick and Newfoundland and Labrador, while prices in Prince Edward Island have flattened out in recent months but have not yet moved any lower.

The non-seasonally adjusted Aggregate Composite MLS® HPI was still up by 3.3% on a year-over-year basis in September, a far cry from the near-30% record year-over-year gains logged in early 2022. 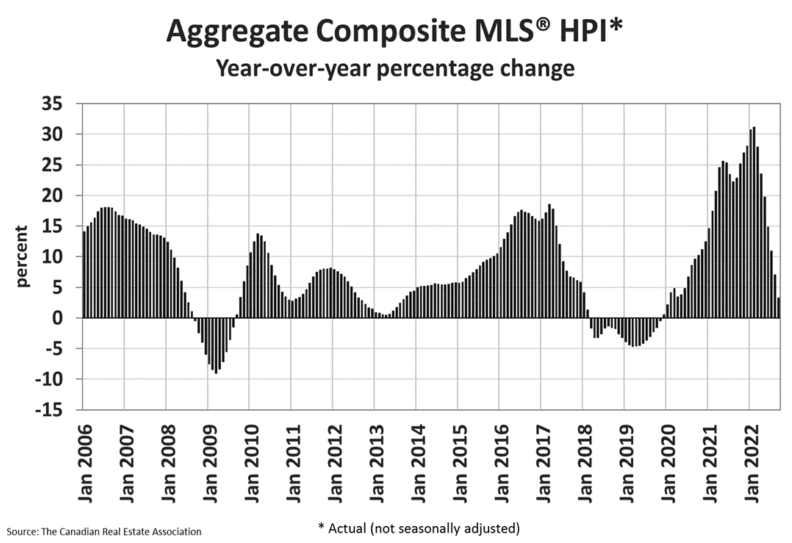 Expect MLS® HPI year-over-year comparisons to shift slightly into negative territory in the final months of this year, with declines becoming larger next spring – a year out from the peak.

PLEASE NOTE: The information contained in this news release combines both major market and national sales information from MLS® Systems from the previous month.
CREA cautions that average price information can be useful in establishing trends over time, but does not indicate actual prices in centres comprised of widely divergent neighbourhoods or account for price differential between geographic areas. Statistical information contained in this report includes all housing types.
MLS® Systems are co-operative marketing systems used only by Canada’s real estate boards to ensure maximum exposure of properties listed for sale.