Retail sales increased 1.1% to $63.1 billion in June, the sixth consecutive increase. Sales were up in 8 of 11 subsectors, representing 76.8% of retail trade. Higher sales at gasoline stations and motor vehicle and parts dealers led the increase.

In volume terms, retail sales were up 0.2% in June.

Given the continually evolving economic situation, Statistics Canada is providing an advance estimate of retail sales, which suggests that sales decreased 2.0% in July. Owing to its early nature, this figure will be revised. This unofficial estimate was calculated based on responses received from 36.5% of companies surveyed. The average final response rate for the survey over the previous 12 months has been 91.3%. 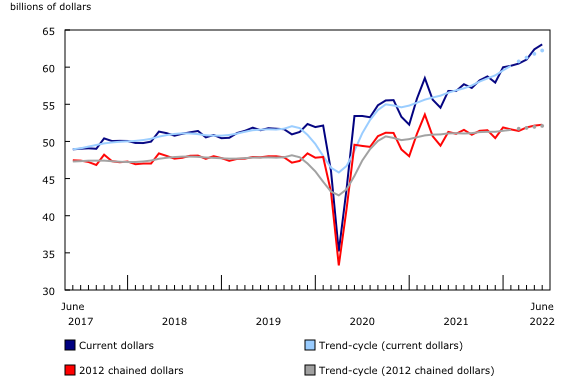 Sales at motor vehicle and parts dealers were up 1.8% in June. The increase was largely the result of higher sales at new car dealers (+2.9%). Higher sales were also reported at used car dealers (+1.7%), which recorded their fastest pace of growth since October 2021. Lower sales were reported at other motor vehicle dealers (-6.9%) and automotive parts, accessories and tire stores (-0.8%).

Higher sales were also observed at clothing and clothing accessories stores (+1.8%), which were led by gains in clothing stores (+2.1%) and jewellery, luggage and leather goods stores (+2.4%). Shoe stores (-0.7%) were the only store type in this subsector to decline.

The largest decline to core retail was observed at food and beverage stores, which decreased 1.1% in June, after increasing 1.7% in May. Lower sales at supermarkets and other grocery stores (-0.8%) and beer, wine and liquor stores (-2.9%) contributed to the decrease in this subsector in June.

Chart 2: Sales increase in 8 of 11 subsectors in June 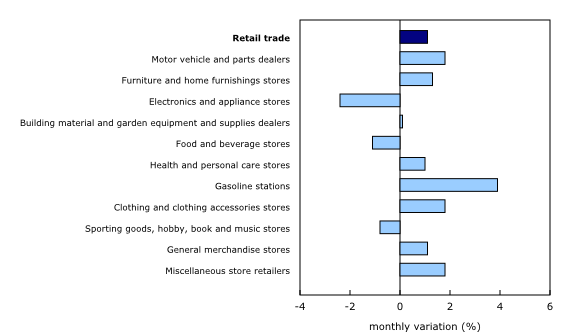 Sales up in seven provinces
Retail sales increased in seven provinces in June. Leading the gain was Ontario (+1.7%) where motor vehicle and parts dealers contributed the most to the increase. In the census metropolitan area (CMA) of Toronto, sales were up 2.5%.

Sales increased 1.1% in British Columbia, led by higher sales at building material and garden equipment and supplies dealers. Sales were up 1.1% in the CMA of Vancouver.

Higher sales were also observed in Saskatchewan (+3.7%) on the strength of higher sales at motor vehicle and parts dealers.

Next release
Data on retail trade for July will be released on September 23, 2022.